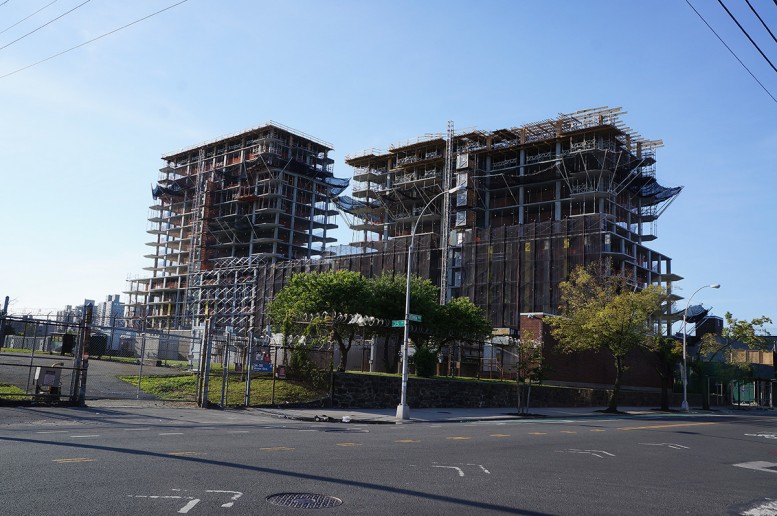 Work began in the fall after the DOB greenlighted a new set of permits, and the structure appears to have reached 13 and 14 stories respectively. The most recent plans call for 404 apartments divided across 298,535 square feet of residential space. That gives us an average 738-square-foot apartment, meaning rentals are likely.

The Schedule A details a list of amenities appropriate for a village-sized development: a swimming pool, doctor’s offices, a gym, daycare, laundry, and 220 bike storage spaces. Of course, there will be 181 parking spots, 119 in the cellar and another 75 on the first floor.

This rendering by Raymond Chan Architect has been floating around since 2013 and matches the one on the construction fence. But the permits list Flushing-based Panagis Georgopolous as the architect of record. Alma first filed plans for the development, once called Alma Towers, back in 2012. The property spans a full block between 34th and 35th Avenues, bookended by the sizable Ravenswood Generating Station to the south and Rainey Park to the north. The developer took over the property for an undisclosed amount in 2001, and has been trying to build on the site since 2008, according to this 2010 article from The Real Deal.

This development was made possible by an upzoning from R5 to R7-1 sometime in the late 2000s during the Bloomberg administration. In exchange, Alma probably had to set aside 20% of the units as affordable. The project may also include “a landscaped public walkway along a riverfront promenade” that would connect to Rainey Park next door, per the architect’s website.

Construction signage predicts the buildings will be finished in May 2016.

While this project has mostly flown under the radar, Alma made headlines last year for its controversial negotiations with the city over Astoria Cove, a 1,700-unit development nearby where 460 units will be set aside for affordable housing. The City Council approved the project last November, but some wondered whether the developer would flip the property instead of pushing forward with construction, for which the city required expensive union labor.