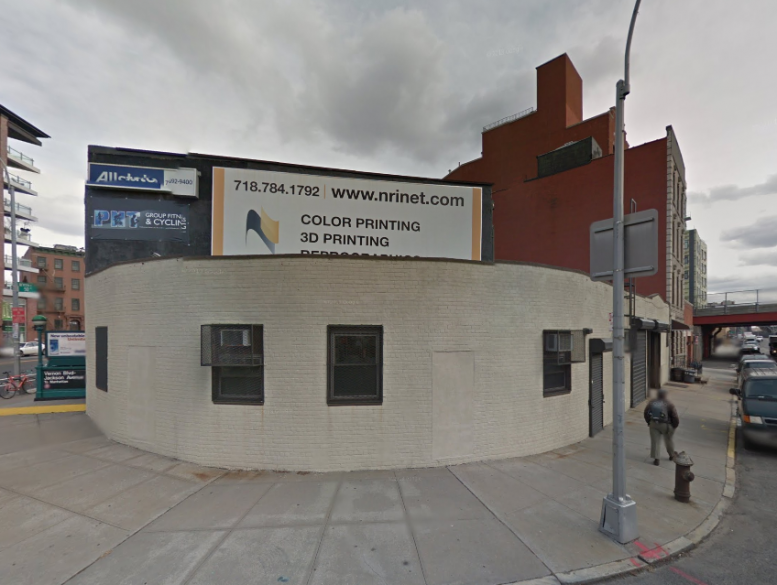 A seven-story apartment building with offices and retail may soon replace this odd little garage at 10-64 Jackson Avenue in Long Island City, on the corner of 50th Avenue near the Pulaski Bridge.

New building applications were filed yesterday to erect a 21-unit mixed-use development on the property, which has an unusual curved corner. The first two floors will hold 10,000 square feet of offices and retail, followed by five stories of apartments. Its 21 units will be divided across 16,021 square feet of residential space, for an average apartment of just 762 square feet, meaning rentals are likely.

Five apartments each will occupy the third through sixth floors, and the seventh floor will have one large penthouse.

Even though this property is on top of the Vernon-Jackson Avenue 7 train stop, the developer still has to build nine expensive parking spots in the cellar, thanks to the city’s car-friendly zoning code.

Emanuel Kambanis of GKA Design Group applied for the permit, and the developer is Jimmy Yee of Chinatown-based Queens Progress Association.

This development was made possible by a 2004 upzoning that allowed larger and taller buildings of up to 125 feet along Jackson Avenue. The 5,000-square-foot plot sits at the edge of a transit-rich micro-hood known as Hunters Point, which stretches west from Court Square to the waterfront and south down to Borden Avenue and the entrance to the Queens-Midtown tunnel. Before the rezoning, the southern tip of Long Island City was zoned almost exclusively for manufacturing, except for the swath of Jackson Avenue that includes this lot.

Now that high-density zoning has encouraged tall towers and pricey rents, the de Blasio administration wants to rezone the area again with a focus on affordable housing. But developers argue that land and construction costs in the hood have risen enough that condos are much more feasible than rentals, Crain’s reported yesterday.

The publication also quotes John Young, the director of the Queens City Planning office, who emphasized, “Housing, regardless of whether it is a for-sale or rental project, [will include a portion] that is affordable. And we mean affordable across a broad range of spectrums.”