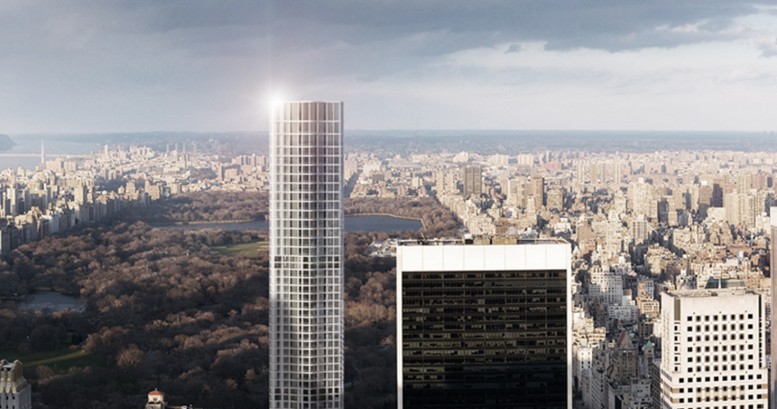 Witkoff is developing the site, which faces unusual constraints, similar to 425 Park Avenue. Due to New York City’s horrendously outdated zoning, the site’s developers must preserve a portion of the old Helmsley Building in order to build a structure with the same air rights.

This means that the old base of the Helmsley will have to be used creatively, which was best illustrated in Handel Architects’ plan. That turned the remaining portion of the structure into a 200-foot tall entryway for the new tower, which would also feature several amenities, including a pool.

The new images of the Herzog & de Meuron design come from fresh EB-5 materials, possibly indicating that it has won the design competition. The tower appears to be about 1,000 feet tall, which is a fair bit shorter than Handel’s 1,210-foot tall plan, but still substantial enough to stand out on the Midtown skyline.

The plan would echo Herzog & de Meuron’s projects at both 357 West Street and 215 Chrystie Street, employing enormous glassy windows set within a facade that appears to be made of cast concrete, like 56 Leonard. The similarities between 1 Park Lane and the firm’s downtown skyscraper end there, as the Central Park project will feature a swooping, curved facade, that bulges outwards towards both the north and south.

Herzog & de Meuron is currently on a roll in New York City, and the firm’s 215 Chrystie Street is also being developed by Witkoff. The existing relationship between architect and developer would lend credence to the notion that the Herzog design is the leading contender to be built.

No completion date has been announced, but it appears the project has now met its financing goals, which total $219 million in EB-5 funding, $462 million in developer equity, and a senior loan of $1.02 billion. The sellout is projected at an average of $8,500 a square foot.

Completion is tentatively slated for 2020, but work has yet to begin on the Helmsley’s partial demolition, and the hotel currently remains open.