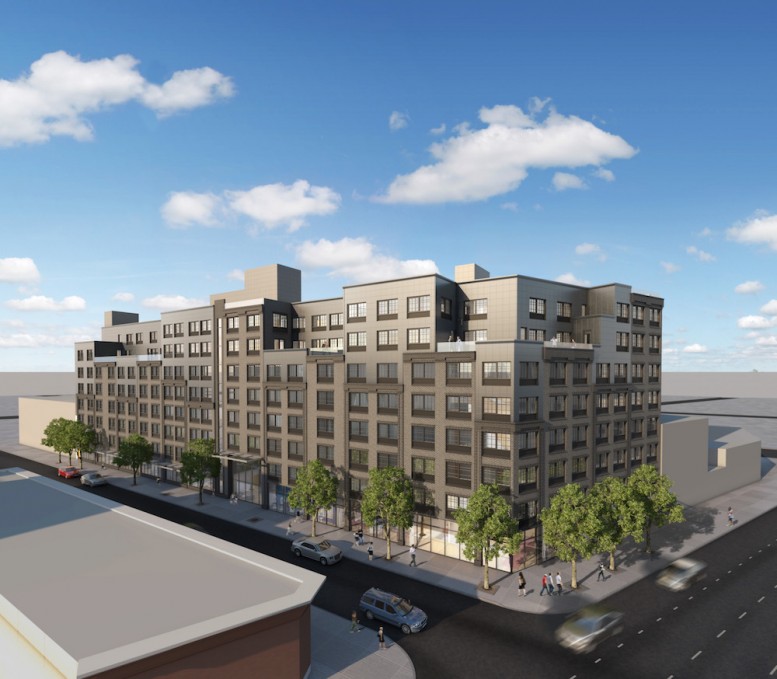 YIMBY has the first look at an eight-story residential building designed by HTO Architect rising at 555 Waverly Avenue, at the corner of Atlantic Avenue in Clinton Hill.

Madison Realty Capital is developing the 190-unit rental project, which will have 40 units set aside as affordable housing. The development will include 7,000 square feet of ground floor retail along Atlantic Avenue, because the developer acquired three sites next to their first lot on Waverly. Those additional properties nearly doubled the parcel’s allowed density and gave Madison an extra 80,000 square feet of floor area to work with.

Back in November, permits were filed for a 122,000-square-foot building with 122 apartments, but now the building has grown to 145,000 square feet. Apartments will range from studios to two-bedrooms, and renters will be able to take advantage of a roof deck, indoor lounges, and a 1,500-square-foot fitness center.

The facade is fairly neutral, sporting a pattern of grays and light browns with alternating facade panels and brick. The architect wants the exterior to “amplify the formal townhouse streetscape language of the Clinton Hill neighborhood.” Although the property is only a block from the Clinton-Washington C train station, the city’s outdated zoning code calls for the developer to build 80 expensive parking spots.

Madison picked up the Waverly side of the site—formerly a Jewish bakery—for $23,500,000 in September, and then dropped another $7,500,000 for three properties around the corner on Atlantic, according to Crain’s.