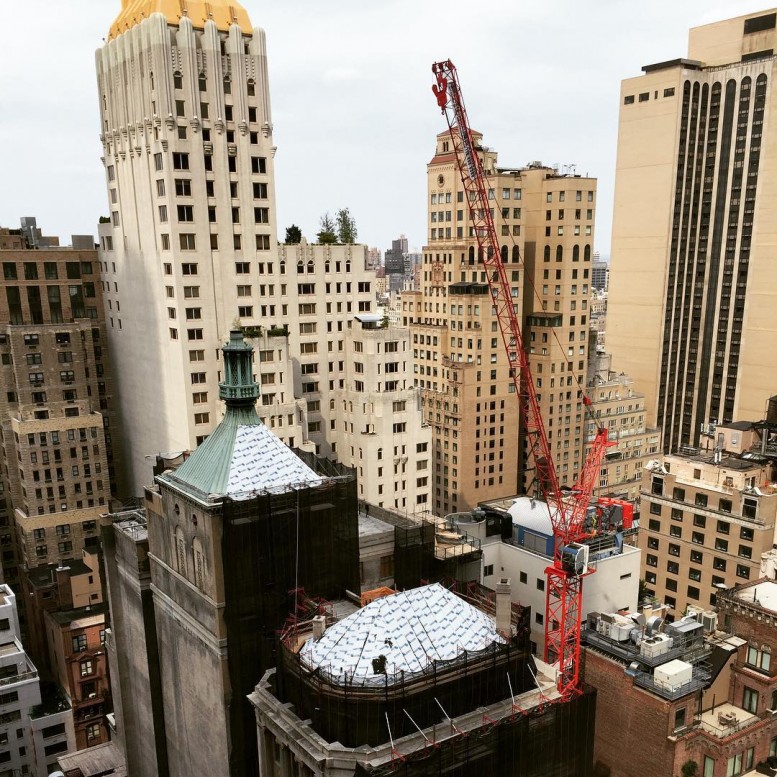 The past few months have seen construction kick into high gear at several sites along and adjacent to the 57th Street corridor, and now 111 West 57th Street will join the pack. Interior demolition and excavation began last year, and now the tower’s crane — the tallest freestanding crane in NYC’s history, at 220 feet — has arrived on-site, signaling impending verticality.

SHoP is designing the residential supertall, which will become the skinniest building on the planet, standing 1,428 feet tall and 60 feet wide (and totaling 60 units over 80 floors). The building’s final height figure has seen several adjustments, and at this point it appears the tower will stand a few dozen feet taller than the almost-complete 432 Park Avenue.

That will still put the building roughly 100 feet below the roof height of Nordstrom Tower just a block to the west, though 111 West 57th Street may reign supreme temporarily, as its smaller scope could result in its topping-out before 217 West 57th Street (which also now has its tower crane). Developer JDS put up the following statement in conjunction with their Instagram update on the site:

Over the weekend, JDS’s construction team successfully erected the tower crane for 111 West 57th​ Street​. It is the tallest freestanding crane in the history of NYC at over 220 feet tall, perched adjacent to​ ​Steinway Hall. The crane will ​​help the building begin its climb to 1428​ ​feet.

Pricing will start at an astronomical $14 million, and Property Markets Group is developing alongside JDS. YIMBY posted fresh interior renderings earlier this year, and the exterior will be clad in terra cotta and bronze; a massive rendering of the tower already shrouds the old Steinway Building, which will be integrated into its base.

Completion is slated for 2017.