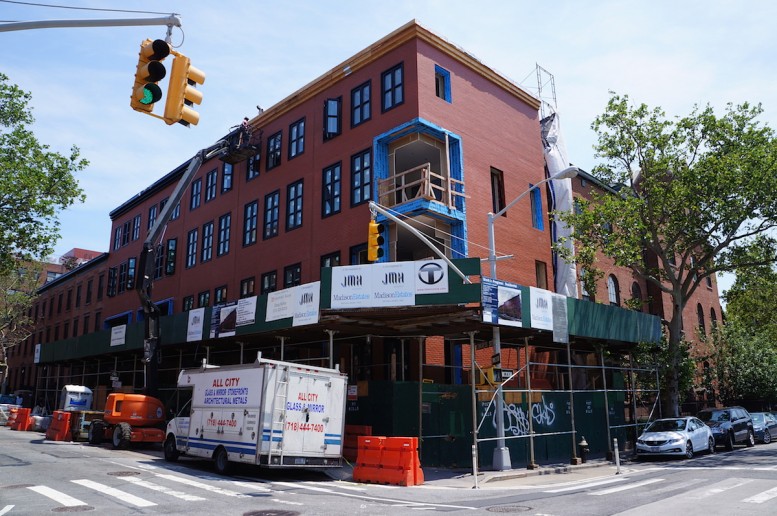 JMH Development and Madison Estates just won Landmarks approval to transform the Brooklyn Heights Cinema into apartments, but their first project to rise in a historic district was the Townhouses of Cobble Hill, at 110-126 Congress Street. The development’s five new townhouses are inching toward completion, and renovations seem to have finished at the four 19th century Greek Revival homes. Workers have installed windows on most of the upper floors, and they were painting the cornices when YIMBY stopped by last week. The nine houses sold out in December, and eight sales have closed, with only one left in contract, according to StreetEasy. They first hit the market two years ago, priced from $3.65 million for three bedrooms and five baths up to $3.875 million for a five-bedroom, five-bath home. Each one has a private roof deck and a landscaped backyard, and some have parking.

Adjmi & Andreoli designed the three- and four-story brick structures, which sit at the corner of Hicks Street near the BQE. They are some of the most contextual new construction townhouses built in brownstone Brooklyn so far, and attempt to blend in more closely than the Marvel-designed 14+9 Townhouses on State Street. It’s not surprising that nearly all sold above ask, and the priciest home was snapped up for $4,250,000, or $1,053 per square foot.

Construction was scheduled to wrap this summer, but fall seems more likely now.

Morris Adjmi and the two developers are also teaming up to redevelop the movie theater at 70 Henry Street, where they hope to create a similarly traditional, five-story brick condo building.

And while new luxury townhomes seem to grow everywhere in Cobble Hill, other recently completed projects in the hood include the Strong Place Townhouses and the rather mysterious row houses at 357-361 Henry Street.