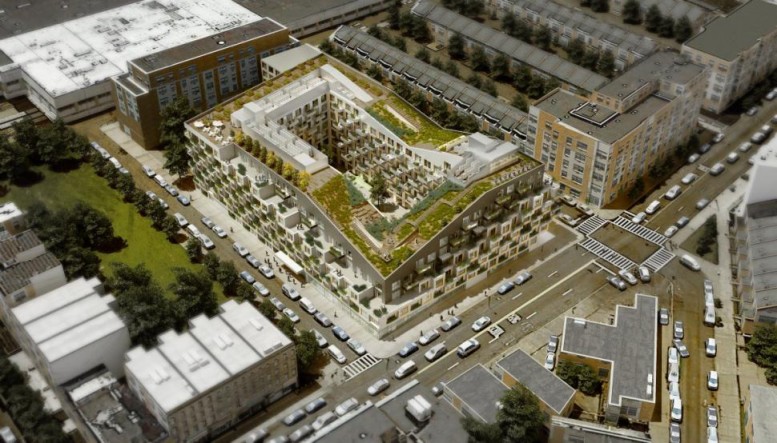 Last night, a collection of Bushwick community activists, union members and neighbors sweated it out on folding chairs at a church on George Street to figure out how they would hold Rabsky Group—the developer of part of the Rheingold Brewery site—to the previous owner’s agreement to provide affordable units and funding for neighborhood schools and parks.

Read Property Group sold half of the 6.4-acre industrial site on Flushing Avenue to Rabsky Group last year for $53 million. In June, community groups began worrying that the Williamsburg-based builder wouldn’t honor the deal that Read struck when the city rezoned the site.

When Read first sought approvals for the Rheingold redevelopment, they planned to build 977 apartments and 10 towers on five blocks at the southern edge of Bushwick. The city mapped out an inclusionary housing zone for the Rheingold site, and the developer agreed to rent 20% of the units at below-market rates. During the ULURP process in 2013, Councilwoman Diana Reyna pushed the affordable set aside to 30% and then agreed to rezone the site for residential development.

They also made a lengthy list of promises to local community groups, which were memorialized in a letter to Councilwoman Reyna. Of course, the letter isn’t legally binding, and Rabsky has been incredibly tight-lipped about its plans for affordable units or open space in the project. Rabsky head Simon Dushinsky is notoriously private and refused to meet with Councilman Antonio Reynoso’s office until May, according to DNAinfo, stirring up even more animosity among neighborhood housing advocates.

“Developers know [that they have to honor these agreements],” Reynoso said during last night’s meeting. “They know that if they don’t, they won’t be able to build in another area, because other council members are gonna know how they treated a community.”

Meanwhile, permits have already been filed and approved for two large Rheingold parcels. The Department of Buildings greenlighted new building permits for Read’s 385-unit development at 123 Melrose Street and Rabsky’s 398 units at 10 Monteith Street in mid-June.

A staffer for Reynoso’s office, Asher Freeman, laid out the specifics of Read’s deal with the city last night. The firm has already donated a piece of the site to South Williamsburg non-profit Los Sures, who plan to build a small development for seniors who make as little as 30% of the Area Median Income.

They also committed $350,000 to improve nearby Green Knoll Park, 18,000 square feet of parkland, $150,000 to fund a local non-profit’s social service programs, $250,000 for non-profit legal services, and $360,000 to upgrade computer labs and fund a healthy food program at two Bushwick elementary schools. On top of all that, they promised $75,000 to help train locals for construction jobs.

Martin Needleman, a lawyer with Brooklyn Legal Services Corporation A who’s helping neighborhood activist group Rheingold Construction Committee, told YIMBY that he expects Read to follow through on their commitments. Needleman has also been fighting the contentious Broadway Triangle rezoning, and Rabsky is planning another big project next to the rezoned blocks.

But is all the saber-rattling for nothing?

Rabsky sent this statement to Brownstoner in June: “We have assured them [Reynoso’s office] that we will build affordable housing and we have every intention to do so. The project is privately funded and there is no affordable requirement, however from the get-go we had every intention to build affordable and we are committed to that. We are in the preliminary stages of the designing the project and will meet with the community as the project advances in the coming months.”

Gothamist even reprinted a letter from Rabsky that Reynoso was handed during the meeting, and it reiterated the firm’s intention to include below-market units.

A service workers union, 32BJ SEIU, was one of the organizers of last night’s event. It seemed like a public ploy to pressure the developer into hiring expensive union labor to help run and maintain their new buildings, which may not be a dealbreaker for affordable construction, but could still make it more expensive and less appealing to include below-market units.

Negotiating funding and abatements for affordable housing is a lengthy and complex process. As an affordable housing expert pointed out to us, most developers don’t sign agreements with the Housing and Preservation Department until construction has begun. That means Rabsky may not know the exact breakdown of affordable units they can provide, and they probably don’t want to release those numbers until they’ve worked out their approvals with HPD. And many developers are struggling with the uncertain future of 421-a, which would require Rabsky to reserve 30% of its units as affordable housing in exchange for a break in property taxes.

The Rheingold controversy also illustrates an interesting pivot in housing policy. The City Council approved the rezoning in the final days of Bloomberg’s administration, and the actual zoning text doesn’t include any legal requirements for affordable housing. But de Blasio’s Astoria Cove deal, approved in November 2014, marked the first time a rezoning required below-market units. And while developers may feel hamstrung by the administration’s inclusionary zoning requirements, the policy will help avoid future confusion over big projects like Rheingold.