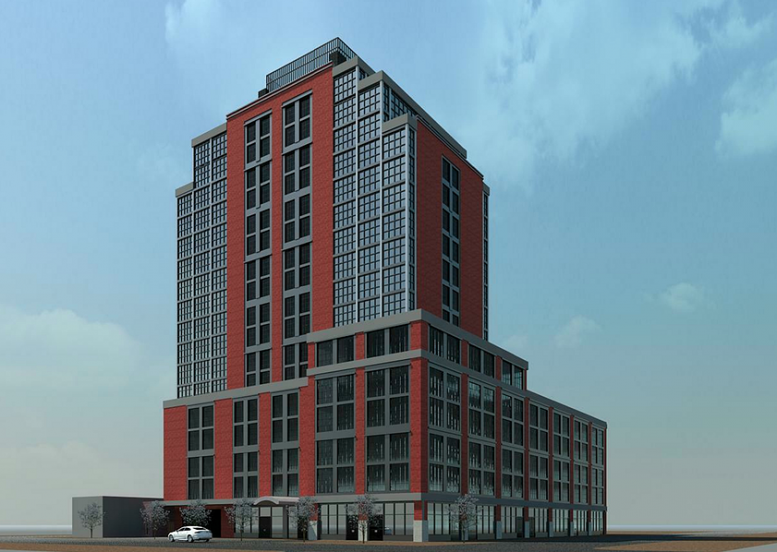 Back in March, Brownstoner Queens discovered initial renderings for a large mixed-use project planned at 3-50 St. Nicholas Avenue in Ridgewood, right next to the Bushwick border. Yesterday, plans were filed to build the 17-story development between Palmetto and Woodbine Streets.

The building will span nearly 180,000 square feet and reach 200 feet into the air. The first five floors will hold 89,000 square feet of commercial space, including retail on the ground floor and office space on the second through fifth floors. Medical offices will take up 3,200 square feet on the fifth floor.

Apartments will be stacked on top, beginning on the sixth story. The remaining floors will contain 129 apartments divided across 87,441 square feet of residential space, for small rental units averaging just 677 square feet each.

The cellar and second floors will hold a total of 350 parking spots. We expect it will be a commercial garage, but it still seems like an incredible amount of parking for a site that sits only a block from the L and M trains at Myrtle-Wyckoff.

The property is currently home to two single-story retail buildings, and demolition applications haven’t been filed to knock them down yet.

3-50 St Nicholas is set to become one of the largest new buildings in Bushwick or Ridgewood, and it will bring new office space to a transit-rich piece of north Brooklyn. Time will tell if there’s a demand for offices in central Bushwick, but maybe it will appeal to companies who are priced out of offices in North Williamsburg’s increasingly expensive industrial zone.