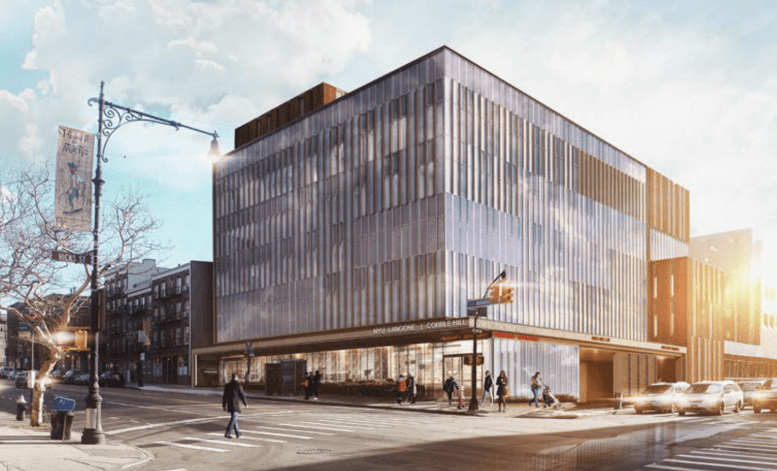 Last week, YIMBY reported on the first permits for a new building coming to 70 Atlantic Avenue, in Cobble Hill, at a site formerly known as 339 Hicks Street. It currently houses a building for Long Island College Hospital, but that will soon be demolished to make way for an NYU Langone Ambulatory Care Clinic, which we can now reveal.

Perkins Eastman is designing the facility, which will span a gross 160,000 square feet over five floors. The building will stand 89 feet tall, shorter than the 12-story structure that currently occupies the site.

Of course, shorter does not mean less urban-friendly, and in this case, the new building will be a vast improvement for the neighborhood. LICH was not exactly aesthetically-friendly, and large plazas around its buildings interrupt the urban street-walls of Cobble Hill that help make it so attractive. Perhaps this is why the NIMBYs opposing redevelopment come across as particularly insane. 339 Hicks Street, soon to be known as 70 Atlantic Avenue, image via Google Maps

Perkins Eastman’s plan will rectify anti-urban formatting, at least on this site, and the new building will be flush with its pre-war neighbors. A multi-colored glassy facade will yield to a bright lobby with large floor-to-ceiling windows, which will look especially engaging when viewed from Atlantic Avenue.

Fortis Property Group bought LICH for $204 million, and the hospital closed its doors back in May of 2014.

NYU has already publicized its exact plans for the new Ambulatory Care Clinic, and per the Brooklyn Paper, it will include the following components:

• A new emergency department on the first floor, which will include two inpatient beds for those who need to stay the night, as well as 10 patient bays, two resuscitation room, two triage rooms, a decontamination room, and 12 other treatment spaces.

• An outpatient surgery center on the third floor, with four operating rooms and two endoscopy rooms (that’s where they stick a camera up or down one of your orifices).

• A cancer center on the fourth floor with space for 22 patients, plus a pharmacy, and a laboratory.

• A diagnostic imaging center — for X-rays and other tech that looks inside patients — on the cellar level of the new building.

The clinic is expected to open in 2018, and NYU has already awarded Skanska a $120 million contract to build the facility.