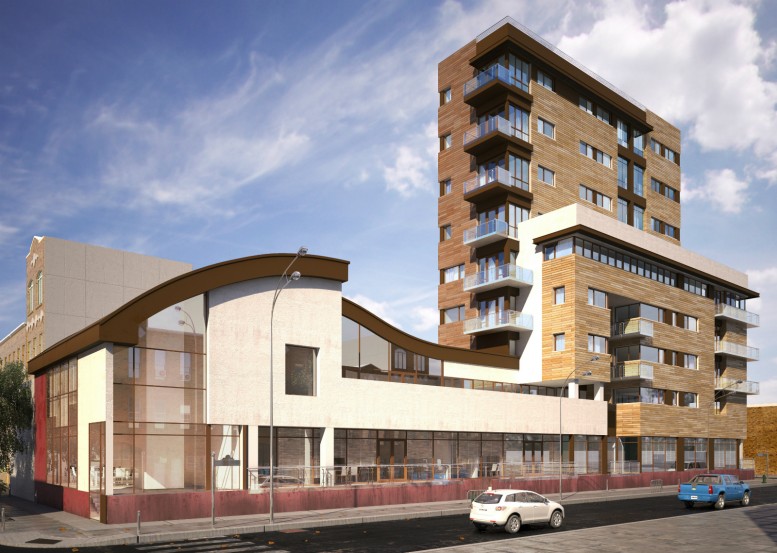 Earlier this year, YIMBY found an on-site drawing for a new development coming to 44 Kent Street, in Greenpoint. The plans were originally created for Cayuga Capital, but the firm sold the property for $8,750,000 last year to an LLC. Now, we can reveal that Pinny and Moishe Loketch of the Loketch Group are the new developers, and the design has also seen major changes, with Nataliya Donskoy’s ND Architecture and Design taking over the project.

While the scope of the building remains the same, the layout has seen some substantial revisions, and the project has seen a bump in height. Building permits for the new version have not yet been filed, but the floor count has increased from six to nine. The original new building application called for 42 apartments spanning 28,698 square feet, but the new version will have 44 apartments split over 34,000 square feet.

This part of Greenpoint is still relatively up-and-coming, so the product will be rentals, which is unsurprising considering units will average about 770 square feet each.

Applications called for 698 square feet of retail under the old plans, but the new design employs a significantly larger retail component stretching over 10,000 square feet and the first two floors of the structure, which will help enliven the currently forlorn lot. This stretch of Greenpoint is in store for major changes over the next few years, and just to the north, the first components of Greenpoint Landing are now rising. That means 44 Kent’s impact on the neighborhood will be relatively minor in comparison, though it will still be beneficial. The facade will feature a variety of neutral-colored materials, but a ribbon of red cladding along the base of the structure will add a bit of visual spice. And if any Brooklyn-based architect is known for pizzazz, it’s Nataliya Donskoy.

Luckily, the building appears to lack PTACs in the renderings as well, which is extremely rare for new rental developments in both Williamsburg and Greenpoint. There will be 22 parking spots in the basement.

No completion date has been formally announced yet, but with foundations complete and superstructure work now beginning, a 2017 estimate would be reasonable.