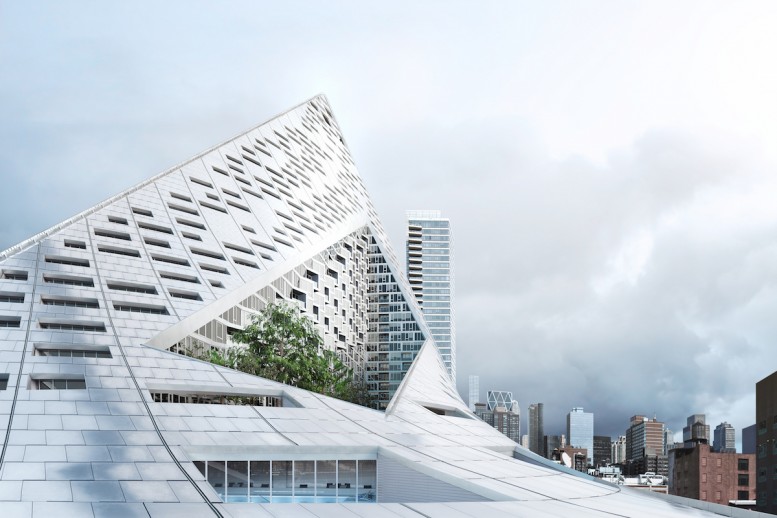 Bjarke Ingels’ dramatic, tetrahedron-shaped rental building is already making its mark on the far west side, and we have some fresh renderings to go along with a new teaser site for the project at 625 West 57th Street, known as VIA 57 West.

The structure will reach 32 stories and 460 feet into the air, and developer Durst Organization expects to finish installing exterior cladding by the end of the month. The building will host 709 apartments, 142 of which will rent for below-market prices through a lottery. Durst predicts that they’ll receive 20,000 applications for the affordable units, but that seems low after 91,000 people vied for 234 below-market units at Sky, Moinian’s West 42nd Street tower. Optimistic readers who meet the income requirements can download applications here and send them in by November 20th. Ingels called the 800,000-square-foot building “the lovechild of a courtyard building and a skyscraper,” and these new images give us a better look at the irregularly shaped outdoor space and its attractive landscaping. They also offer a close-up view of the angled, protruding facade, which almost conveys the feeling that the exterior is moving. The facade will feature sloping cutouts for terraces, the central courtyard (which opens up to the Hudson River), and a pool on the lower floors. Besides the signature courtyard and pool, the project will come with a slew of amenities, including a basketball court, fitness center, golf simulator, screening room, and shared “living rooms” equipped with fireplaces, chef’s kitchens, dining rooms and outdoor terraces.There will also be 45,000 square feet of retail on the ground floor. The courtyard of 625 West 57th Street, rendering by MARCH

Leasing is set to begin early next year, and residents are expected to begin moving in sometime in the spring. The courtyard of 625 West 57th Street, rendering by MARCH