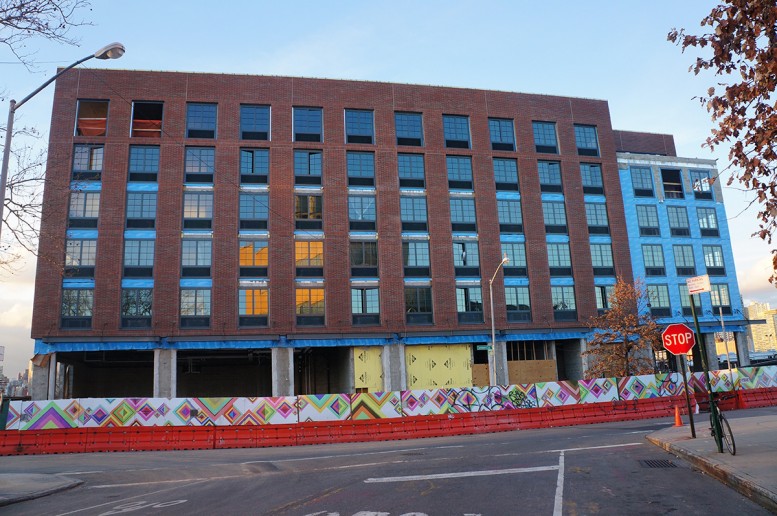 21 Commercial Street, from the corner of Franklin Street

Construction is chugging along on the banks of Newtown Creek in north Brooklyn, where Greenpoint Landing will eventually span 10 acres with 5,000 apartments. YIMBY swung by the megaproject earlier this month and caught up on the progress at three affordable rental buildings: 33 Eagle Street, 21 Commercial Street, and 5 Blue Slip.

When we last stopped by in the spring, 33 Eagle only had its foundation, and 21 Commercial Street was a six-story shell. Since then, both buildings have topped out. Each one will reach seven stories into the air and include ground floor retail. 33 Eagle Street, from the corner of West Street

Where West Street dead ends along the waterfront, 33 Eagle Street is now getting its brick facade and large, loft-style windows. Eventually, it’ll have 98 apartments and 86,736 square feet of residential space, along with 1,500 square feet of retail.

Two blocks north, 21 Commercial Street is even further along. Most of the brick facade has been attached, and workers have installed the majority of the windows. PTACS are, unfortunately, sitting beneath those windows, marring a perfectly decent exterior and driving up future tenants’ energy bills. 21 Commercial will hold 93 apartments, 82,476 square feet of residential space, and 2,500 square feet of retail. And finally, two floors have risen above the construction fence at 5 Blue Slip, a new address created just west of 21 Commercial. It will have six stories, but this building will be the largest of the three. Ultimately, there will be 103 apartments across 94,717 square feet of residential space, plus 3,800 square feet of ground floor retail.

Handel Architects are designing all three buildings, and the developers are Park Tower Group and L+M Development.