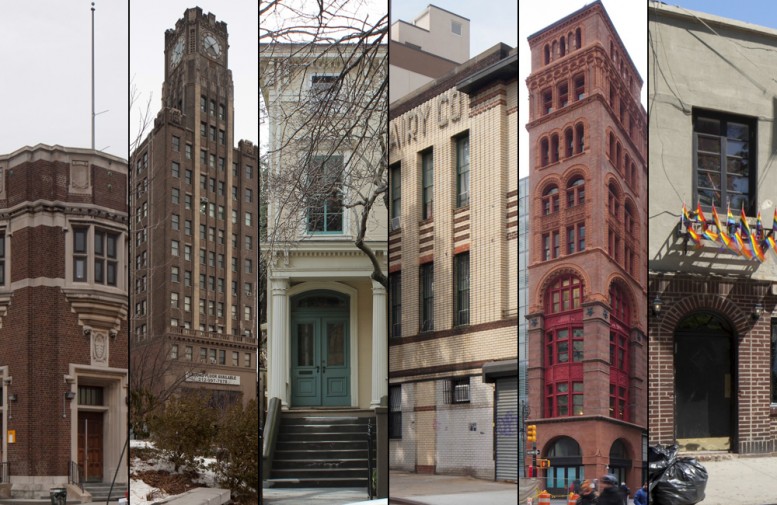 The individual landmarks designated in New York City in 2015.

This year marked the 50th anniversary of the New York City landmarks law, which empowered the Landmarks Preservation Commission to designate landmarks and historic districts in the five boroughs. With 2015 coming to an end, we thought it would be a good time to review what the commission has protected this year. Six individual landmarks and four historic districts were designated, adding up to protection for over 2,000 more structures. It includes the former Shaari Zedek Synagogue at 221 Kingston Avenue, now the First Church of God in Christ, which was built between 1923 and 1925. The district’s designation took about four years, from calendaring on June 28, 2011 to a public hearing on January 17, 2012 to a vote this year. The Stone Avenue branch of the Brooklyn Public Library, located at 581 Stone Avenue, was designated an individual landmark on April 14. The structure was built between 1913 and 1914 and designed by William B. Tubby. Its construction was funded by a gift from Andrew Carnegie and it was originally known as the Brownsville Children’s Library. The Bank of Manhattan Company Building at 29-27 Queens Plaza North in Long Island City, Queens was designated an individual landmark on May 12. Commonly known simply as the Long Island City Clock Tower, the structure was designed by Morrell Smith and completed in 1927. At that time, the Queens Chamber of Commerce called the 11-story building the borough’s best. It sat vacant for over a quarter of a century, but is now part of the Property Markets Group and Hakim Organization plan for the new tallest building in Queens, to be located at 29-37 41st Avenue. That residential tower will rise 77 stories and 915 feet. The Henry and Susan McDonald House at 128 Clinton Avenue in Clinton Hill, Brooklyn was designated on June 16. Located on a hill with views of the East River, it dates back to 1854. Though its architect is not known, the LPC said it is an “unusually well-preserved and rare free-standing Italianate style frame house with Greek Revival style elements.” The M.H. Renken Dairy Company office building at 582-584 Myrtle Avenue and engine room building at 580 Myrtle Avenue, also in Clinton Hill, were also designated on June 16. The engine room was constructed around 1860 and the office building in 1932. The engine room’s façade was altered between 1936 and 1937 and the two buildings now stand as a unified Art Moderne structure. Milk production ceased there in 1959 and a variety of businesses have operated on the premises since. In Manhattan, the Riverside-West End Historic District Extension II was designated on June 23. It exists in three sections, but primarily runs between Riverside Drive and about half way between West End Avenue and Broadway from West 94th Street to West 108th Street. It contains about 344 structures constructed primarily between the mid-1890s and the early 1930s. Designation took about five years from calendaring on November 16, 2010 to a public hearing on November 25, 2011 to the vote this year. The Corbin Building at 11 John Street in the Financial District was also designated on June 23. Built between 1888 and 1889, the eight- and nine-story building was designed by Francis Kimball, who also designed the Montauk Club in Park Slope. The Corbin Building was named for its owner, businessman and Long Island Rail Road founder Austin Corbin and was constructed as an office building. Largely intact, it is now part of the Fulton Center transit hub. The Stonewall Inn at 51-53 Christopher Street in the West Village was yet another designation that took place on June 23. 51 Christopher Street was built in 1843 and 53 Christopher Street was built in 1846. The two were combined with a new façade in 1930. The bar’s designation as an individual landmark is unusual because it already sat within in the Greenwich Village Historic District, meaning it was already under the protection of the LPC. However, that historic district was designated on April 29, 1969, two months before one of the most historic events in the history of the gay rights movement. It was on June 28 of that year that Stonewall Rebellion (also known as the Stonewall Uprising and/or Stonewall Riots) began. A police raid set off days of protests, to dramatically shorten a very important story. Now, any decisions the LPC makes about the structure will take that history into account. In fact, structurally, it isn’t much to look it, but it is important culturally and the commission might be taking a closer look at sites that deserve designation more for their cultural impact than architectural aesthetics. The Mount Morris Park Historic Extension in Manhattan was designated on September 22. Though there is a second, much smaller segment, the district mainly runs down the center of the blocks Adam Clayton Powell Boulevard and Lenox Avenue/Malcolm X. Boulevard from West 118th Street to West 123rd Street. It includes about 276 properties, dating to as far back as 1870. Designation of this district happened rather quickly. It was calendared on April 14 and a public hearing was held on July 21. Finally, the Bedford Historic District, in Brooklyn’s Bedford-Stuyvesant neighborhood, was designated on December 8. It includes 824 buildings. Almost all of them were built between 1870 and 1900, and are remarkably intact. That is due, in no small part, to residents banding together in block associations after World War II. Designation took a little over three years, with calendaring on May 15, 2012 and a public hearing on January 15, 2013, followed by the vote this year.

That’s 2015 for you. 2016 should be a very interesting year as the LPC takes the next steps in addressing its 95-item backlog. Stay tuned and Happy New Year!

7 Comments on "What New York City Landmarks Were Designated In 2015?"