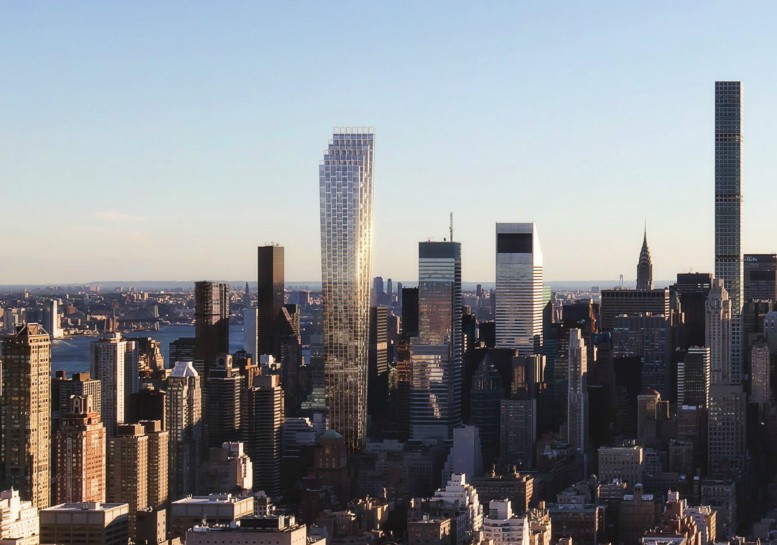 Until now, the residential supertall boom has been focused on the core of Midtown, with One57, 432 Park, 217 West 57th Street, and 111 West 57th Street all rising in the blocks between Eighth and Park avenue. Now, we have fresh renderings for Kohn Pedersen Fox’s entry into a design contest for 151 East 60th Street, which would rise on the corner of Lexington Avenue and East 60th Street, stretching Midtown’s new skyscraper crown a few blocks northeast of its current local maxima.

While the design is certainly flashy, the plans are far from a definite go. The entry was for a competition, and while no winner has been publicly announced, even the plans that win RFP submissions typically see major revisions in the translation from renderings to reality. The site’s developer, Kuafu Properties, closed on the assemblage for $300 million back in October. Nevertheless, the new images give an excellent idea of what’s in store for what could easily become the most prominent high-rise on the Upper East Side. The current development cycle will result in several new towers in the vicinity, with the tallest already under construction located at 520 Park Avenue, on the corner of 60th Street, one block to the west. That puts 151 East 60th Street in a tricky position given the current market dynamics. Witkoff’s plans for the redevelopment of 36 Central Park South have already been put on hold, and while the other 57th Street supertalls appear to be moving full steam ahead, sites that haven’t yet had their old structures demolished probably aren’t going to be moving forward anytime soon.

Despite the upcoming pause in new supertalls that appears to be looking likelier by the day, the situation for 151 East 60th Street is likely to evolve into a positive in time for the next development cycle. Boutique projects like the aforementioned 520 Park, 118 East 59th, and 200 East 59th are likely to set higher price-points than any buildings currently in the neighborhood, and while those developments may be competing amongst one another for buyers, they will also eliminate some of the few sites left in the area that can support new towers.

That means the playing field for 151 East 60th Street should be significantly brighter by 2020 or so, when it will become one of the last large assemblages available on the Upper East Side that is actually capable of hosting a supertall. With permanently unobstructed views from upper floors guaranteed in all directions, the tower will have an edge over similar product in the works at sites like 520 Fifth Avenue, which will be shrouded in the depths of the Midtown skyscraper plateau.

In any case, the site’s current occupants have not yet been demolished, which means that the (likely) supertall is unlikely to leave the drawing board anytime soon.