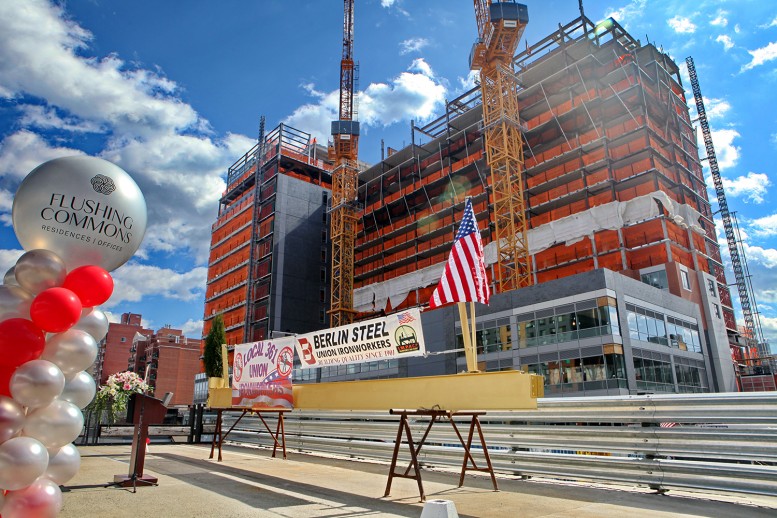 A major milestone was recently reached by a 1.8-million-square-foot mixed-use development under construction in downtown Flushing, Queens. The topping out beam is raised into place at 138-35 39th Avenue and 38-18 Union Street at Flushing Commons. Credit: F&T Group The project is being developed by F&T Group, The Rockefeller Group, and AECOM Capital, and Lt. Gov. Kathy Hochul attended the topping out ceremony. As for what’s already standing, it has been designed by Perkins Eastman Architects, with landscape work by Thomas Balsley Associates, and built by Tishman Construction.

That includes 18 penthouses of varying configuration and prices that go upwards of $3 million. Most of the units have already sold and about half of the penthouses have also sold. Closings are expected in the fourth quarter of 2016. Every unit has Swedish oak wood flooring and double-glazed insulated windows. Some of the penthouses have 10-foot ceilings, radiant heated bathroom floors, Bosch appliances exclusive to the penthouses, plus some have terraces with nearly 640 square feet.

Residential amenities include a 24-hour concierge, a residents’ lounge with an “eco-friendly” fireplace, Wi-Fi, a library and reading area, and a “fully-equipped” chef’s demonstration kitchen, bar, and dining room. There is also a fitness center, bicycle storage, and cold storage for deliveries.

There will also be a host of outdoor amenities, located on the fourth floor, including a dog play area, a children’s playground, walking gardens with a pergola, and barbecue grills. All of this is extremely convenient to mass transit, with the 7 train around the corner and the Long Island Rail Road less than 10 minutes away.