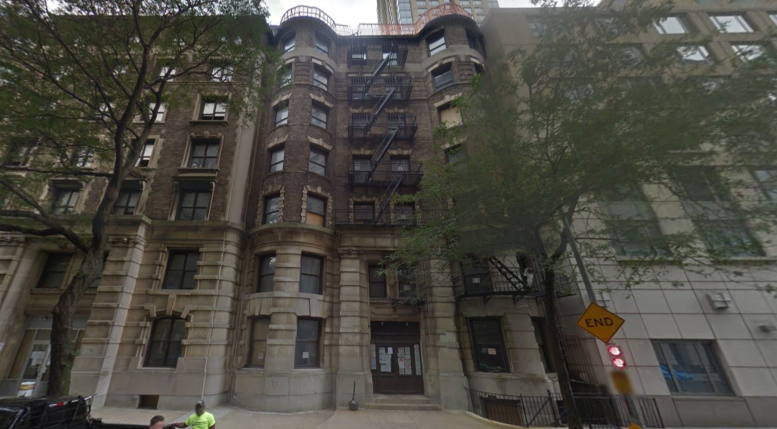 However, the seven-story building will remain the same size. It currently spans 33,755 square feet and houses 18 or 19 little rooms per floor. The renovation will transform those 280-square-foot rooms into residences that will average 964 square feet.

Meanwhile, the connected and nearly identical building at 350 West 71st Street already has alteration permits. 350 is a similar size, but it will hold a larger number of smaller units. Plans approved last year call for 55 apartments spread across 29,876 square feet of residential space. The average unit there will measure roughly 543 square feet, which pushes us close to micro-unit territory. We wonder if it’ll be similar to 2299 Adam Clayton Powell Jr. Boulevard in Harlem, where a pair of innovative developers renovated little SRO units and kept them at 450 square feet or less.

Herald Square-based DXA Studio is handling the renovation of both buildings.

346-350 West 71st Street occupies a prime piece of real estate between Riverside Boulevard and West End Avenue, in the heart of the newly expanded West End-Collegiate Historic District. So the Landmarks Preservation Commission will need to approve any changes to the facade, even for a fairly minor update like replacing the windows.

Icon Realty picked up the 110-foot-wide property for the surprisingly low price of $18.5 million in 2012. That price was half what the previous owner asked in 2007. Apparently the building’s value had plummeted because the state banned the practice of renting rooms in class A residential buildings for less than 30 days, The Real Deal reported at the time. TRD also noted that the previous landlord had used the building as an informal hotel for years. Now that Airbnb is transforming New York’s hotel market, judges upheld the law again last week, ruling that rent-stabilized SROs cannot be used for short-term rentals or hotels.

Icon put the two buildings on the market in January without a specific asking price. They are overbuilt by about 20,000 square feet, as the listing notes, and they are far larger than what a developer could build under modern zoning.