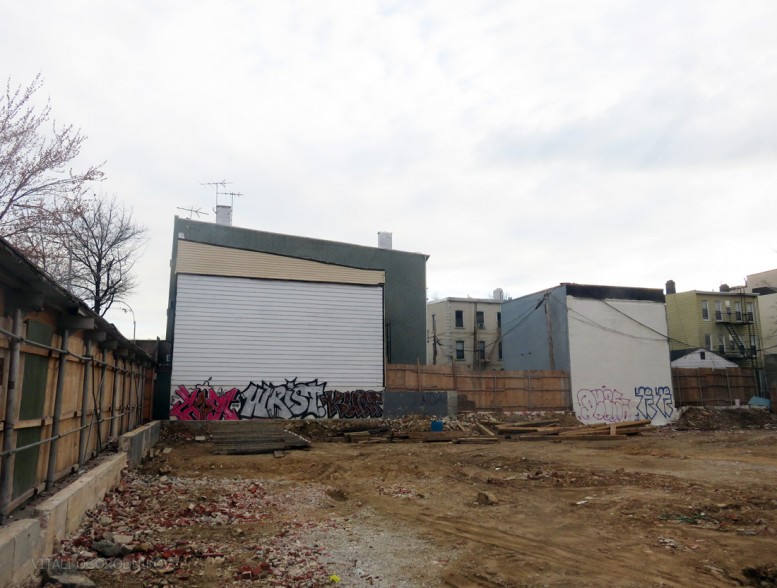 Another block in central Williamsburg is shedding its commercial past as a warehouse at 88-92 Withers Street is torn down. It is slated to be replaced by a 12-story residential building, developed by Caro Enterprises and JHG Holdings. The 12,500-square foot corner lot sits across from the pocket park at the Badame-Sessa Memorial Square, sandwiched onto a small triangular block next to the elevated Brooklyn-Queens Expressway. The cleared lot, situated within a residential-manufacturing M1-2/R6 zoning district, measures 125 feet along Withers Street to the north and 100 feet on Leonard Street to the east. The two-building warehouse, classified as “semi-fireproof,” appeared as a single structure. Though representative of the neighborhood’s commercial legacy, the facility had few redeeming qualities and added little to the streetscape, especially given its park-facing location. The single story facades rose around 25 feet high. Their blank, red brick walls were punctured only by a string of small casement windows and exhaust fans along the top, as well as three loading bays on Withers. The warehouse was last used by Paramount Studios for storage. On May 28, 2014, the New York Times reported an off-market site sale from Reen Ventures L.L.C. to Caro Enterprises for $8.6 million, brokered by Christine Blackburn and Lior Barak of the Corcoran Group. At the time, the lot was described as having 38,000 buildable square feet. The building was demolished between late 2014 and the start of this year. Given its former program, the lot was listed under the hazmat (hazardous material) designation prior to site clearance. The proposed replacement’s 12 stories are planned to rise 148-feet-high. Thirty-six units would occupy 31,500 square feet within the 45,000-square-foot building. The Perkins Eastman-designed building would stand as the tallest in a several-block-wide radius, and one of the highest in all of central Williamsburg. Its height would allow for skyline views of Brooklyn, Queens, and Manhattan, though the multi-lane expressway would also be a significant feature in northbound vistas. The building is not entirely out of scale with the neighborhood, given the similarly-sized, though generally slightly shorter, projects scattered across nearby blocks. The five story, pre-war building next door at 84 Withers further helps transition the scale to its low-rise neighbors.

The project’s location offers a variety of commuter options. The G and L trains stop at the Metropolitan Av-Lorimer station four blocks south. The B24, B43, and B48 buses run within the three-block radius. A bike lane runs next to the property along Leonard Street. The BQE may be accessed via Exit 33, situated 1,500 feet to the northeast. Withers Street with Badame-Sessa Memorial Square on the right. Looking west. The street segment discussed below is in the center of the photo.

At its closest point, the elevated highway passes less than 100 feet away from the site, but its presence is softened by the Badame-Sessa Memorial Square in between. Though the playground and a cluster of trees provide a welcome green oasis, its utility is limited because of the small size, as it measures only around 7,000 square feet including the sidewalk. The pocket park’s potential would be maximized if the 190-foot-long segment of Withers Street to the south were converted into pedestrian space, which would more than double the size of the park by adding 9,000 square feet of public land. A new focal point would be created for the dense residential community, while giving playground-bound children one fewer street to cross. Such a move would have been impossible while the warehouse was still in operation, since its loading bays opened onto the street. Now, the only two buildings left along the stretch would be 84 Withers, which has its main entrance within mere feet of Meeker Avenue, and the new project at 88 Withers. If the building is to include a loading bay facing Withers rather than Leonard Street, it may be accommodated with a dedicated driveway. Image based on Google maps

This suggestion essentially mirrors the development on the other side of the BQE. There, Frost Street and Meeker Avenue formed a slightly smaller triangle, where single-story, rundown warehouses faced unused road surface. By 2013, the triangle was converted into a pedestrian plaza. The Battery Harris restaurant and beer garden to the west and a seven-story residential building to the north replaced the dilapidated structures. Though rather barren at the moment, the plaza adds pedestrian character to the resurgent block. The conversion of Withers may be even more effective, since, unlike the exposed the Frost Street space, it would be sheltered from the elevated expressway by the existing tree grove.