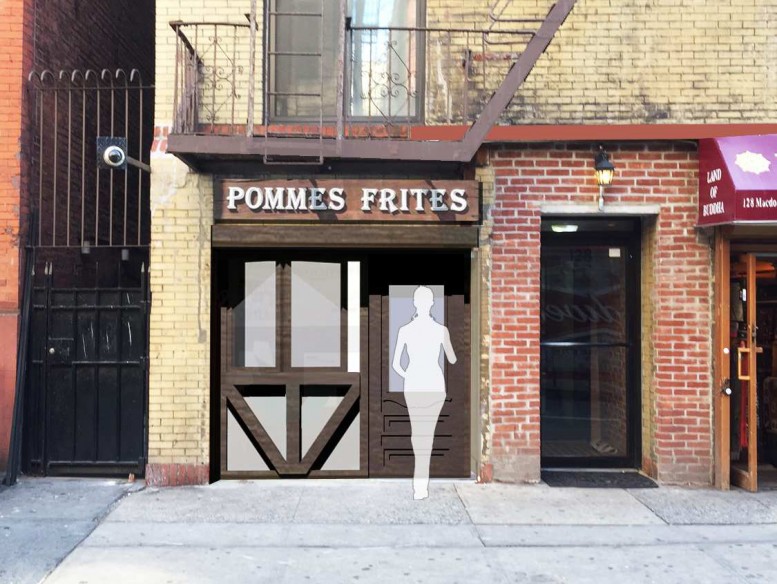 The building itself dates back to 1893 and already features a mix of brick colors, the result of alterations. The presentation was made by architect Ananth Robert Sampathkumar of Greenwich Village-based NDNY Architecture + Design PLLC. The façade will be pushed back so it doesn’t interfere with the public way. It will feature a wood sign with concealed LED lighting and an operable window over a stucco portion meant to evoke Belgium. Once you enter, via a door on the right side, you will descend several steps. The fire escape will also be modified so as not to interfere with the new storefront infill. Wider view of the proposal for 128 MacDougal Street

LPC Chair Meenakshi Srinivasan observed that, like the building, the block is filled with a mix of styles. Commissioner Diana Chapin was not nuts for the timbered lower portion of the façade’s left side. Commissioner Frederick Bland, however, loved seeing something that wasn’t generic. “I like its idiosyncratic… character,” he said.

Kelly Carroll of the Historic Districts Council testified that she was excited to see Pommes Frites reopen, but had some suggestions for the design. “Tragically, while the building on Second Avenue did not survive last year’s explosion, HDC warmly anticipates Pommes Frites’ reopening farther west in the neighborhood, and we wish you all the success in your new location.  This ground floor is truly a blank slate, and HDC felt that a different approach to your brand could be tried here in terms of the storefront design,” she said. “The neo-Tudored, half-timbering seems odd in such a little expanse, and maybe it is more appropriate and beneficial to engage in the high volume, pedestrian nature of MacDougal Street. In a rare design suggestion from HDC, this may be an ideal place to have an open, accordion door storefront.”

The testimony of Sarah Bean Apmann of the Greenwich Village Society for Historic Preservation (GVSHP) echoed that sentiment regarding the lower portion, as did the recommendation from Community Board 2.

The commissioners decided to approve the proposal, without modification.

You can view the presentation slides here: