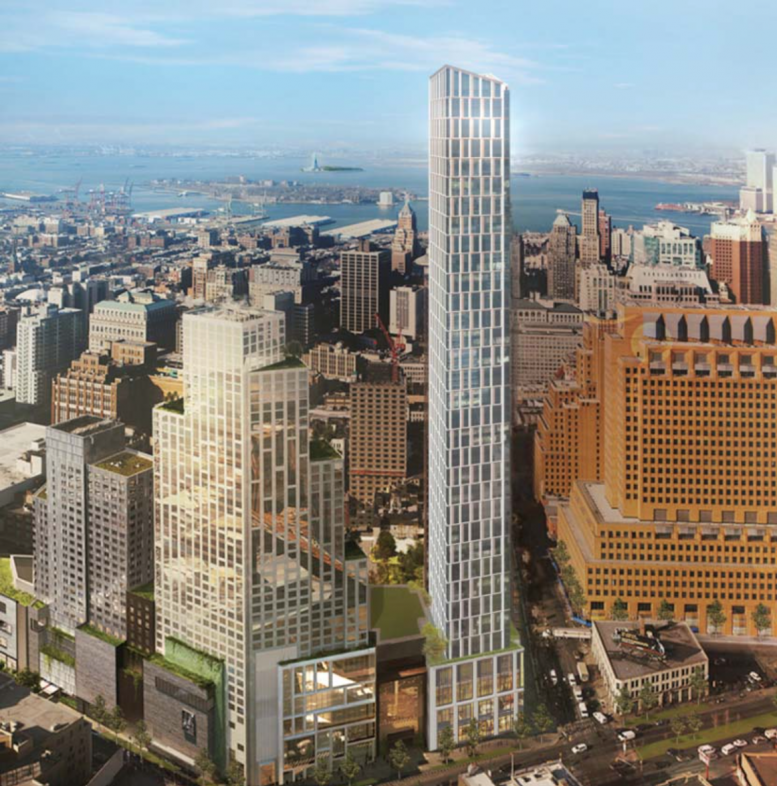 Last summer, the Times reported that Extell had acquired the third and final piece of City Point, a sprawling mixed-use development in Downtown Brooklyn. The developer rolled out initial renderings for their 59-story tower at 138 Willoughby Street in January, and now we have a better look at what will eventually be one of Brooklyn’s tallest towers.

We spotted the image in a presentation for potential foreign investors, and it comes with a slew of interesting details on the development. Extell hopes to build 450 condos on top of a four-story, 68,000-square-foot retail base. The residential portion would fill 466,000 square feet.

The skyscraper is expected to rise 692 feet at the corner of Flatbush Avenue and Willoughby Street, according to plans filed in December.

The firm led by Gary Barnett expects to net $838 million from the condo sales and roughly $33 million from the ground floor retail. Overall, the project is expected to cost a whopping $574 million.

Kohn Pedersen Fox will design the bright white building, which will have built-in automatic window cleaners – just like Extell’s supertall One57 condo tower next to Central Park.

The developer spent $115.5 million on the 21,500-square-foot site, which is currently used as a staging area for construction on the rest of City Point. The 1.8-million-square-foot development already includes a four-story mall and two residential buildings, topping out at 19 and 31 stories respectively.

Washington Square Partners and Acadia Realty Trust developed the 675,000-square-foot mall, and the developers behind the residential portion are BFC Partners and Brodsky Organization. BFC just finished the shorter, 250-unit tower, where 80 percent of the units are affordable. Brodsky’s 440-unit market-rate building, City Tower, hit the market in October.