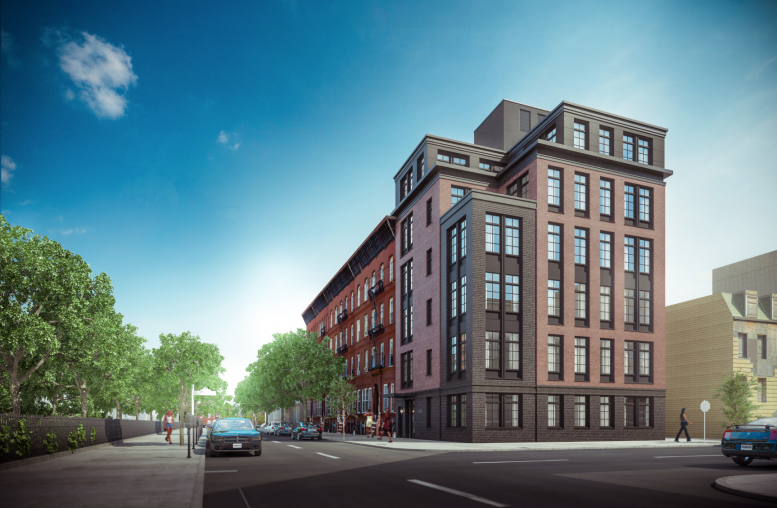 Last summer, developer Exclusive Homes New York filed plans for a six-story residential building at 253 Tompkins Avenue, across the street from Herbert Von King Park in Bed-Stuy. Now, we have the first look at the project.

Designed by Issac and Stern, the development will bring 11 apartments to the corner of Tompkins Avenue and Van Buren Street, a few short blocks from the Bedford-Nostrand stop on the G train. They’ll be divided across 9,748 square feet of residential space, giving us average units of 886 square feet.

The first three floors will hold two units each, and the fourth and fifth floors will have two half-floor units and a duplex. The top floor will have one penthouse. Both the duplex and penthouse will get private terraces. The plans also include a shared backyard.

No parking is included, because the project is small enough to duck the city’s requirements.

EHNY’s Avi Tarshish picked up the lot for $790,000 in November of 2014. Then the property changed hands again last June for $2,150,000, but it sold to an LLC with the same address as Exclusive Homes. The firm does business out of an office nearby at 914 Bedford Avenue, between Myrtle and Willoughby avenues.

The rendering bears a strong resemblance to two other Issac and Stern projects in the hood – 740 Dekalb Avenue and 1325 Herkimer Street. But the design is more traditional than those buildings, because the windows are narrower, and the facade appears to be all brick (or brick-like panelling).