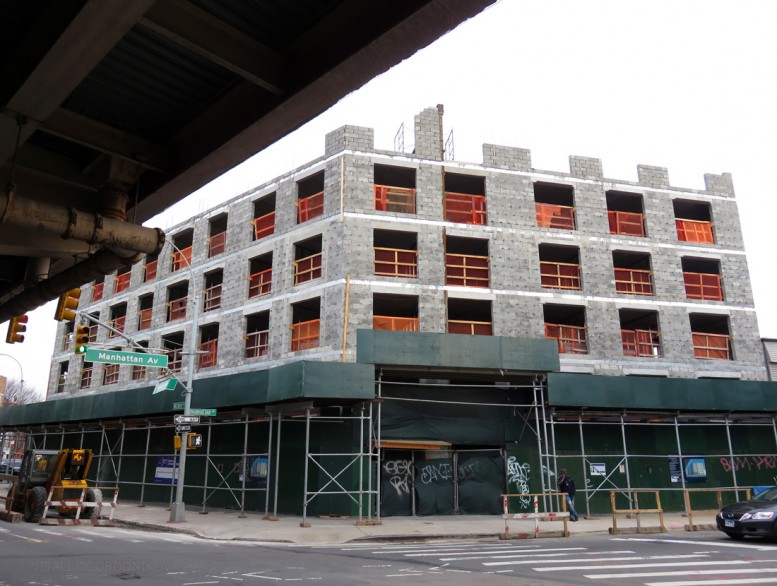 Topping-out is imminent at a 70-foot-high affordable housing complex at 410 Manhattan Avenue, next to the Brooklyn-Queens Expressway in northern Williamsburg, as the sixth floor of the seven-story structure is underway. Permits show that the 52,065-square-foot building will reserve 45,202 square feet for fifty residences. The rest of the footage would be allocated for the artwork-lined lobby, as well as other amenities and accessory space. Though no car parking is provided, there would be 36 spaces for bicycles. Dunn Development Corp. is the developer for the project, while HLS Builders Corp is attached as the general contractor. Curtis + Ginsberg is listed as the architect of record. Rodkin Cardinale Consulting provide engineering services.

From a technical standpoint, the project goes by many names, or, more precisely, by many addresses. 410 Manhattan Avenue appears to be the official address, as evidenced by the renderings. 408 Manhattan was used as the placeholder for the permits. The property itself unites three lots at 406 Manhattan Avenue, 408 Manhattan Avenue, and 402 Meeker Avenue, while also facing Richardson Street at its northeast corner. The resulting assemblage results in a roughly 12,000-square-foot, irregularly-shaped lot. Its main portion sits between Manhattan Avenue to the west, Richardson Street to the north, and Meeker Avenue to the northwest, which runs parallel to, and beneath, the elevated expressway. A roughly 25-foot-wide by 100-foot-long rear portion snakes its way deep into the block’s interior. In the past, this area was occupied by a wing of the warehouse at 402 Meeker.

Similar to many other developments in the neighborhood, a series of aging, single-story commercial structures occupied the site prior to construction. In step with the local warehouse vernacular, each one featured a mostly windowless, brick façade. 402 Meeker addressed the avenue with the storefront of the Beverage World beer distributor. The approximately 8,000-square-foot building was the largest of the three and extended deep into the block’s interior with a rear extension, its walls facing against against residential backyards. The remaining 4,000 square feet of the combined lot were occupied by 406 and 408 Manhattan Avenue, where Supreme Quilting was the most recent tenant. Redevelopment was announced in December 2014. At that time, the Rabsky Group, a prominent Williamsburg developer, paid $6.1 million for 406 and 408 Manhattan Avenue, as well as an additional $3.6 million for 402 Meeker. When Dunn Development filed for the project with the Department of Buildings, Rabsky was still the owner, so their name appears on the permits. The three structures were gone by early 2015, demolished by Brooklyn-based Atweek Inc.

The site’s commercial past had to be addressed prior to construction start. The Remedial Investigation Report revealed historical fill material up to three-feet-deep. Remediation consisted of excavating approximately 2,000 tons of soil, though this soil would have been removed for foundation work even if no environmental action was required. Looking from the street level, the building appears only six stories tall. The exterior rises from the sidewalk line to the main cornice without setbacks. The penthouse level is set back so deep that it would be visible only from some neighboring buildings, as well as from the expressway, which runs only 35 feet away from the 2nd- and 3rd-story windows. This deep setback removes penthouse residents from the bustle of the street, while maintaining the sightlines of the Brooklyn and Manhattan skyline that opens beyond the terrace. Skyline views would also open from all the floors above 3rd. The rest of the roof space would be covered in solar panels.

Though the ornament-free façade is minimalist, its white color brightens the moody setting created by the elevated expressway across the street. The Spartan design’s distinguishing features come from its angled footprint and sparse geometric accents. Light gray bands, composed of a blend of three clay coat bricks, wrap the corner portions along the two intersections, framing aluminum panels in between. Large, nearly floor-to-ceiling windows have particularly good sound attenuation, shielding the residents from expressway noise, as well as any other sound intrusions typical for Brooklyn streets. These windows are framed with glazed red brick. These niches provide color and depth to an otherwise flat, white facade. The tall, multi-lane overpass that slices across northern Brooklyn is the most prominent element on the local streetscape. Its presence is so omnipresent that, in an unusual twist, even project renderings acknowledge the overpass, even though it is common for designers to substitute such neighbors with placeholder buildings, empty space, or even parkland in promotional illustrations. But despite its overpowering presence, the other adjacent streets are pleasant enough to ensure that the building sits in an overall attractive setting. Manhattan Avenue and Richardson Street present quiet, tree-lined rowstone sidewalks. Overpass-bound Meeker Avenue would be vastly improved with a row of tree plantings to match the blocks to the southeast and northwest.

In addition, Meeker Avenue runs past a series of small, triangular public spaces on either side of the BQE. McCarren Park, northern Brooklyn’s largest, is less than two blocks to the north. The East River waterfront stretches ten blocks west, where once-industrial blocks continue their transformation into residential space and parkland. Williamsburg’s cultural hub, around Bedford Avenue, lies around five blocks west of the new building, and the Graham Av stop of the L train is five blocks south.

The project’s setting would be improved further if the city converts the unused blacktop triangle to the northeast of the building, between Richardson Street and Meeker Avenue, into public space, the way it did with many similar junctions along the BQE. The only issue would be garage access to the corner house at 139 Richardson Street, which is why the existing short street segment would be retained, slimmed down to a minimal width that would allow for vehicular access. As the neighborhood’s residential density grows, public amenities ought to be expanded accordingly.