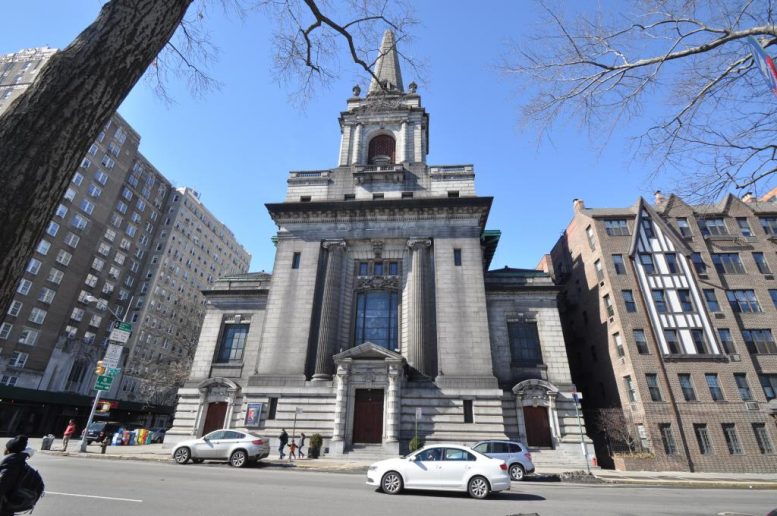 A very long process has finally reached its resolution. On Thursday, the plan to convert the landmarked former First Church of Christ, Scientist in New York City at 361 Central Park West into condominiums was voted down by the Board of Standards and Appeals.

We told you in March that the applicant, listed as 361 Central Park West LLC, withdrew the plan. Technically, that ended up being sort of true. The numbers, long viewed as suspicious by at least one BSA member, were withdrawn and new ones were submitted. Among the changes made, the proposal started as 39 units, was reduced to 35, and then reduced to 34 by yesterday. The developer also raised the estimate for appliances from $10,000 per unit to $35,000 per unit. Additionally, there was talk of legal fees, tax estimates, and insurance.

Before we go on, an ever-so-brief summary of the church’s history. It was designed by Carrére & Hastings and built in 1903. It was designated an individual landmark in 1974 and served the Christian Science faithful until it was determined to be no longer necessary. At that point, the Second Church at 68th Street was upgraded to First Church and 361 Central Park West became the Crenshaw Christian Center. Then they sold it and it has sat vacant ever since. It was way back in March of 2015 that the Landmarks Preservation Commission, after multiple hearings, approved the proposal. Then it went for another round at Manhattan Community Board 7, though its votes were only advisory. It then went to the BSA, which, just this year met three times on the matter without rendering a decision.

While residential development is allowed as-of-right on that plot of land, the developer needs waivers from the BSA to accomplish the conversion. Those variances would have been granted if the board agreed to five findings.

As we reported back in early December, the first was that there are unique physical conditions, including irregularity, narrowness or shallowness of lot size or shape, etc. make it impossible to comply with existing zoning. Second, that those physical conditions mean that there is no possibility of a reasonable return under current conditions. Third, that if a variance is granted, it “will not alter the essential character of the neighborhood or district.” Fourth, that the hardships are not the applicant’s fault. Fifth, that the variance sought is the minimum required to achieve reasonable return on the property.

That brings us today. Mitch Korbey, at least the third attorney for the developer to address the BSA since December, spoke of “application fatigue.” Still, he pleaded for more time to submit in writing justification for the project.

“This is just another case of shifting the numbers around,” said BSA Commissioner Dara Ottley-Brown.

Korbey replied, “This is not about us moving numbers around. This is not a game of three-card Monte.”

But Ottley-Brown would have none of it. She, and Vice Chair Susan Hinkson, accused the developer of not even making an effort at marketing. Indeed, a Corcoran representative addressing the hearing admitted that his firm had only been retained last week.

“Something’s not right,” Ottley-Brown said, adding that the credibility of the developer is in question.

Attorney Michael Hiller, representative of the Central Park West Neighbors Association and the official spokesperson for the opposition to the project, echoed Ottley-Brown and Hinkson, saying “They don’t want to test the market.” He also said that the developer’s assertion that the structure is functionally obsolete is absurd. Indeed, Pastor Terry Starks, who moved to Georgia following his time preaching at the Crenshaw Christian Center, would love to return to the pulpit at 361 Central Park West.

“The ground keeps shifting,” Hiller said about the viability of the project and the new set of numbers. “The numbers don’t add up.” “‘Application fatigue’ is the understatement of the day,” he added.

A representative of Manhattan Borough President Gale Brewer said the former church was “meant to be a place of public assembly,” adding that the proposal was not viable.

Pastor Terry Starks said returning the structure to use as a church would be a “game changer.” He went through the math of how many people would live there if there was one resident per unit (34), if there were two residents per unit (68), and if there were three residents per unit (102) and said he could bring thousands to worship. “That church’ll be full!” he proclaimed to loud cheers in the hearing room at 22 Reade Street.

Kate Wood, who heads the Upper West Side preservation group Landmark West!, said the old information had been repackaged and was now even less credible. “Like Cinderella’s sisters, the shoe simply doesn’t fit,” she said.

There were over 15 members of the public who testified against the proposal (often exceeding their allotted three minutes apiece), including one resident of 370 Central Park West, who said it would be a “visual disgrace… a bad acid dream out of the 1960s.”

There was one person who spoke in support of the project, representing the American Institute of Architects.

In the end, the BSA commissioners voted down the project, three to one. Vice Chair Hinkson, Commissioner Ottley-Brown, and Commissioner Eileen Montanez voted against it. Commissioner Shampa Chanda voted for it, having earlier said she thought it was a “good project.” BSA Chair Margery Perlmutter recused herself from this case, having served on the LPC.

What happens to the former church sitting at the corner of Central Park West and 96th Street? We can’t say, but with this residential conversion not happening, selling or renting it out as a church, other meeting place, or community space is more likely. Some structural changes, however, have already been made in the wake of the LPC approval last March.