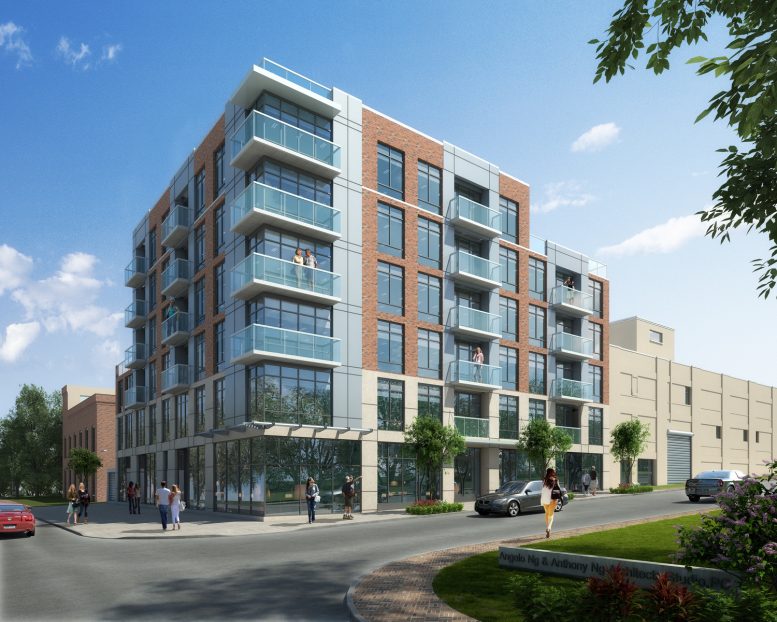 Workers recently started pouring the foundation for the six-story building, which will rise at the corner of 23rd Street. When it’s finished, the development will hold 25,302 square feet of residential space and 6,233 square feet of commercial space. That commercial space will be photo studios, according to the plans, and 37 condos will be stacked on top. The typical unit will measure just 680 square feet, which means the project will be mostly studios and one-bedrooms.

The second and third floors will each hold nine units, followed by seven units apiece on the fourth and fifth floors and five units on the sixth. There will also be a 19-car garage in the cellar, which satisfies city parking requirements. A recreation area on the second floor will round out the project.

This swath of Long Island City was historically known as Dutch Kills, and it was rezoned first in 2001 as part of a larger, neighborhood-wide rezoning, and then again in 2008 as the Dutch Kills Subdistrict. The new zoning—which upgraded the neighborhood from industrial to mixed-use residential—covers a 40-block area that begins just north of Queensboro Plaza and stretches almost all the way up to 36th Avenue, while reaching east along Sunnyside Yards.

Zehao Fang, doing business as an LLC based in Hell’s Kitchen, is the developer, and Xiaohong Zhao of Ameriland Brook applied for the permits. Angelo and Anthony Ng’s Architects Studio is responsible for the design and the rendering.

The blocks north of Queensboro Plaza are positively booming with new construction. In fact, a 17-story rental tower was finished next door in 2014. One-bedrooms there can fetch as much as $3,400 a month, according to listings on StreetEasy.

Construction on the building stalled early in the recession, and the city ultimately bailed out the project with $7.6 million from the the Housing Asset Renewal Program (HARP). The bailout required that the developers rent 108 units—out of 117 total—at below-market rates. Back in 2014, the building’s “affordable” studios rented for $1,100, and two-bedrooms went for $2,186, according to the Post. Rents appear to have increased dramatically since, causing us to wonder whether the developers are following the regulatory agreements they signed with the city in exchange for low-interest construction loans and subsidies back in 2011.