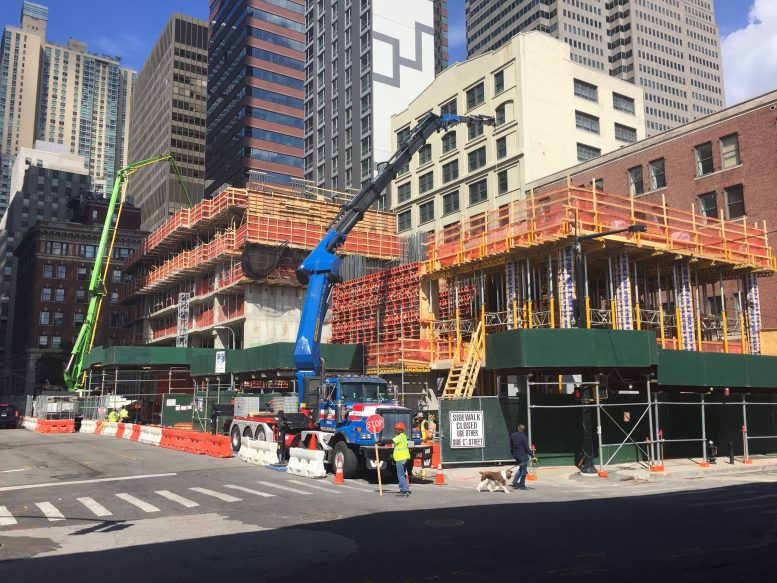 151 Maiden Lane at left, One Seaport at right, photo by Rich Brome YIMBY also has a few new renderings of the base of the Marriott, designed by Peter Poon Architects. The tower will rise 33 floors and 341 feet, with 271 rooms in all. As the architects explained to YIMBY,

In response to the nearby waterfront, segments of the façade are angled towards the water, thereby allowing guests a view.  However, we also believe in creating a unique and changing hotel experience.  Therefore, instead of having every room face the water, some rooms are angled towards Front Street to better allow a view of the city.  Because the hotel is divided into three unique sections each with different variations of views and angles, hotel guests who stay in the hotel multiple times can have completely different experiences of the Seaport District each time they stay. While the new Marriott will enliven the western end of its block, One Seaport will fill the eastern portion. The future residential tower will stand 670 feet and 51 floors to its roof, though marketing lists a count of 60. It is being developed by Fortis Property Group and was designed by Goldstein Hill & West Architects, as YIMBY first revealed back in 2014. One Seaport, photo by JC_Heights

These new buildings will set the stage for even larger changes in coming years. While Howard Hughes’ plans for a tower on the waterfront were foiled by neighborhood NIMBYs, the developer has since successfully assembled and sold a site that has enough air rights for a tower reaching over 1,400′ in height, at 80 South Street. Completion of 151 Maiden Lane is expected in 2017 while One Seaport will deliver in early 2018.