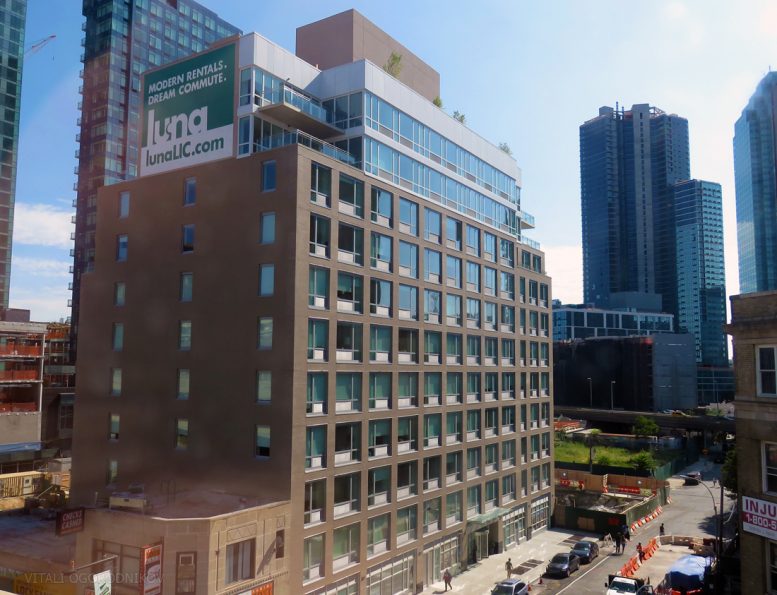 One would think that a neighborhood located across the river from Midtown Manhattan, the world’s largest office district, would sport a formidable skyline of its own. After all, Queens Plaza, at the foot of the Queensboro Bridge, along with the Court Square area a few blocks south, is astoundingly convenient with one-stop subway access to Midtown. Plus, there are mass transit options, including the LIRR, that reach all parts of Queens and much of northern Brooklyn, and there is the proximity to major boulevards and highways that put two international airports and the Long Island suburbs within easy reach. Surprisingly, for most of the 20th century, Long Island City’s meager skyline consisted of just a handful of squat office structures, built around Queens Plaza prior to World War II. 42-15 Crescent was the only office building of significance built between the pre-war period and 1990, when the iconic Citibank Building arrived at One Court Square. According to Loopnet, the office building at 43-15 Crescent was officially known as Crescent Plaza Office Center. B-class office space occupied floors two through nine, with the top levels opening nearly unobstructed views of the Manhattan skyline. The towering Silvercup sign atop the eponymous studio a few blocks west, coupled with the majestic span of the Queensboro Bridge, added unique Queens flavor to the panorama. In contrast to the scenic vista, the building itself looked dismal. It addressed the street with rows of double-hung windows spaced with dull beige brick, which aged quite poorly over the years. The southern portion of the street façade was treated almost as a separate composition, with two single-window bays framing a three-window arrangement in between. At the rear, sets of four double-hung windows, pockmarked with protruding AC units, punctuated walls of red brick, spaced with exposed concrete floorplates. A plain, off-center bulkhead shared roof space with exposed mechanical equipment. The eyesore at the foot of the Queensboro Bridge approach greeted subway riders and motorists entering the city’s largest borough. The four retail spaces with irregularly-shaped floor plans, which shared the ground level with the lobby and garage, were frequently shuttered with metal gates during the building’s later years. Properties like these, coupled with the surrounding post-industrial cityscape, gave Long Island City its long-lasting unsavory reputation.

As YIMBY’s regular readers surely know, the neighborhood is undergoing an unprecedented transformation that started a few years ago. 42-15 Crescent was swept up by the wave of change in December 2012, when Sundance Real Estate Advisors sold the aging property to Meadow Partners for $19 million. The Midtown-based investment fund set out to transform the aging office property into a 124-unit rental. The developer enlisted Press Builders, Inc. to lead the reconstruction process. Construction permits indicated a height increase from nine to 11 stories, or from 98 to 124 feet to the parapet. The new bulkhead would boost the original height from 103 feet to 151 feet. The interior square footage would grow by 19,993 square feet, bringing the new total to 101,936. Of that, 94,349 square feet would be split between 124 units ranging from studios to two-bedroom apartments, giving an average of 761 square feet per unit. 7,596 square feet would be allocated for commercial use. No parking would be included. Looking north, with the Queensboro Bridge Viaduct in the foreground.

Most of the city’s residential conversions take place within buildings built before World War II, so the emphasis falls on preserving their innate architectural beauty. At 42-15 Crescent, the designers were tasked with turning a mid-century ugly duckling into a swan, or at least making it feel like a home rather than a boardroom. The most straightforward option would be stripping the building to its concrete skeleton and starting with a fresh facade. Instead, the architects chose a more delicate intervention. The street-facing facade was refashioned a grid of square, floor-to-ceiling windows. Floor-to-ceiling glass, framed within bands of light-colored metal, wraps the two new floors at the top. The look clashes with the brick grid of the main façade, bestowing it with a well-defined crown. Symmetry was not a driving force at the rear, eastern façade. In its south half, the brick facade was maintained yet the window apertures were expanded to floor-to-floor height. The vertical addition continues the existing setbacks, which were refashioned as terraces. The biggest change to the original structure took place on the rear facade’s northern half, where the exterior of floors two through seven was torn down and the floorplates of floors three through six were trimmed back several feet. The exposed interior space was transformed into exterior loggias, enclosed within glass railings that contrast with the metal balustrades of the terraces. Loggia ceilings expose the building’s most interesting detail. Instead of using the common, flat concrete slab, the original architects employed the waffle slab for the floor plates. True to its name, the square grid of protruding ribs supporting a relatively thin layer of concrete looks like a waffle. These stiff slabs are capable of supporting greater weight loads while spanning longer distances at a lesser concrete expenditure. However, the complicated formwork requires a greater labor investment and builder expertise, and the finished product comes with a reduced fire rating. This uncommon architectural detail is generally seen as a quirky relic of mid-century modernism, though some newer buildings use such slabs to make dramatic design statements. Similarly, the residential conversion at 42-15 Crescent uses the feature to its advantage, leaving the rectangular niches to grace apartment ceilings. The building website shows them prominently in interior renderings, and boasts of their “cool, modern tone.” By removing a portion of the original façade at the rear, the architects expose the waffle to full public view, visible both at loggia ceilings and in the apartments behind the glass partitions. This public exposure will be short-lived. Foundations are under construction at the 20-story 42-10 27th Street next door to the east. The south half of the block is the future site of the 18-story, ODA New York-designed 41-20 27th Street. Together, the two future neighbors would almost entirely obscure the building rear from public view. In addition, 41-20 27th would stand just feet away from Luna’s south-facing lot wall windows. It is likely that the architects anticipated this partial obstruction when they reduced the original number of lot wall windows by about half. Though the number of windows upon the northern lot wall was reduced by half, the gamble fared better on that side. These windows overlook a small, 25-foot-wide, two-story retail building at 25-02 Queens Plaza South and open upon wide northbound views made available by the plaza’s impressive, 265-foot width. These windows are unlikely to be blocked, since the small, 2,485-square-foot footprint of its low-rise neighbor makes it an unlikely candidate for redevelopment. This is good news, since the pleasantly ornamented property enhances the block with its shops and restaurants. 42-15 Crescent occupies the entirety of its 12,750-square-foot, mid-block lot, which measures 150 feet long by 85 feet deep, leaving no space for a ground level yard. Outdoor access is provided via the aforementioned terraces and loggias, as well as the Sky Terrace shared rooftop deck that offers lounge chairs, barbecue stations, and greenery. Aside from a view corridor of the Queensboro Bridge and northern Midtown beyond, Manhattan skyline views are becoming increasingly limited. The 13-story, John Fotiadis-designed building under construction across the street at 42-14 Crescent Street, as well as the 44-story 23-01 42nd Road a block further, would soon be joined by 24-16 Queens Plaza South and 43-22 Crescent across the street. Though the Manhattan skyline would remain partially visible, the rooftop experience would be dominated by Long Island City’s own high-rise peaks. In 2014, construction scaffolds wrapped around the façade. The steel frame for the new floors, resting on top of the original concrete structure, topped out by mid-2015. Construction netting came down some time between mid-November and mid-December 2015, revealing the renovated façade. Sidewalk scaffolds were dismantled in early February 2016. Around this time, Meadow Partners sold the nearly finished property to the World Wide Group for around $70 million. The previous owner upped the building value by $51 million, or 368 percent, since their acquisition three years and two months earlier. But to the average Long Island City resident, the building’s value comes from its transformation from an eyesore into a functional member of the growing neighborhood.