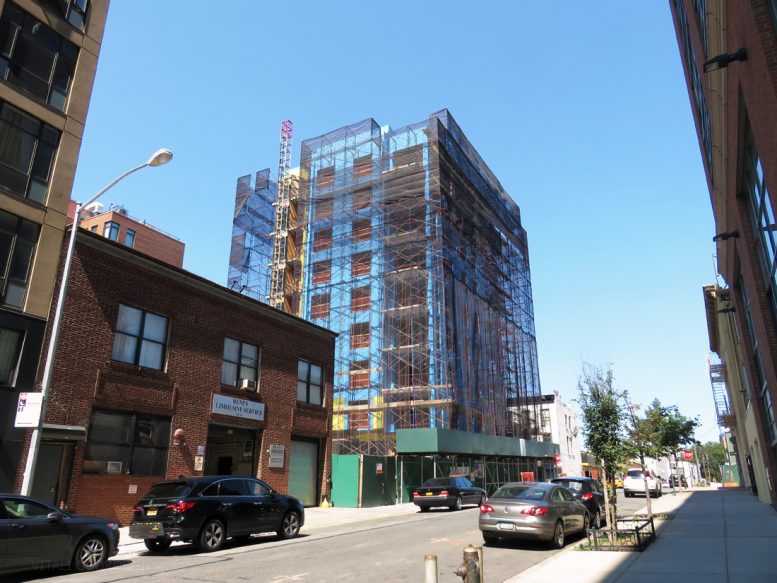 Queens Boro Tower is in the center background, in scaffolds. Looking north.

In her pivotal 1961 book “The Death and Life of Great American Cities,” urban planning advocate Jane Jacobs praised neighborhoods that offer mixed building scales, with small, medium, and large buildings in proximity to one another. Noted architecture critic Paul Goldberger addressed the singular profile of the 1990 Citibank Building in Court Square (not known as One Court Square) as “an exclamation point, well designed and carefully placed,” which “will do the skyline no grievous harm.” Although each case must be examined independently, we hold a similar belief that there is no inherent problem with tall buildings sharing space with low-rise neighbors. Having said that, the opposite approach, where the urban scale transitions uniformly and gradually, is pleasing in its own right, and the scale transition at the north end of the Court Square District is one of the most effective in the entire city.

Permits list the height of 41-02 27th Street at 91 feet. When the bulkhead is included, the structural height likely rises past the 100-foot mark. The building’s bulk is matched to the south and west, where it joins the street wall of approximately 10-story structures. The buildings on the opposite end of these blocks, which mark the northern boundary of Queens Plaza, tend to stand taller, reaching 15 to 30 stories. New buildings on the other side of Queens Plaza rise to true skyscraper proportions, some of which climb past the 50-story mark. While it stands at the foothills of the skyline crescendo of the Court Square district, the Queens Boro Tower lives up to its name as it towers over the older, low-rise community on the north side of 41st Avenue. But even within this context, the newcomer does not overwhelm its settings. Its presence is softened by the large, pre-war edifice of the Academy of American Studies on the opposite side of the avenue a block east, as well as a series of mid- and high-rise hotels that have been sharing space with adjacent rowhomes since the start of the decade. In addition, the six-story apartment building at 27-05 41st Avenue, which is set to rise on the opposite side of the intersection, would further soften the scale transition. Looking west along 41st Avenue. Recently-completed Baker House is in the center.

The 30,355-square-foot structure dedicates 20,914 square feet to residential use, with 4,073 square feet of retail occupying most of the ground-level. A supermarket is almost ready top open at the recently completed Baker House at 41-07 Crescent Street, which stands about 100 feet away down the block. In conjunction with the future commercial space within other buildings that are set to join the avenue, the revitalized retail corridor would energize the currently sleepy 41st Avenue with pedestrian activity.

41-02 27th Street reconciles its traditional and recently built neighbors not only through its scale, but also its exterior design. The flat surface of its light colored panels appears contemporary but its square windows, set within a solid exterior, present an approach more in step with tradition than the all-glass walls common in new apartment buildings. The all-glass surface is used along the base, where it provides transparency to the retail space, along the balustrades of the balconies that mark each of the building’s four corners, and along the top two floors of the east façade facing 27th Street. Some architects make the aesthetic mistake of using visually heavy cladding above glass-clad foundations, making the building bulk look like it “floats” above the sidewalk. Here, the issue is averted via a series of panel-clad columns that visually “prop up” the panel façade that sits above the glassy ground floor. Looking up from the intersection of 27th Street and 41st Avenue

The all-glass façade of the upper floors, which echoes the treatment at the base, opens an east-facing vista overlooking low-rise rowhomes across the street, towards Northern Boulevard three blocks away, and further towards Sunnyside on the other side of the eponymous rail yard. North-facing windows of the top floors would look towards low-slung skyline of Dutch Kills and Astoria, with the RFK Triboro Bridge stretching in the distance.

The situation with the south façade remains a mystery. According to the permits, the building footprint covers 100 percent of its 5,000-square-foot lot, which measures 50 by 100 feet. The permits also do not list any yards. Typically, the lot wall of such properties would remain blank and windowless, in anticipation that a neighboring development would eventually block it from view. Here, however, the south facade appears decked out in a full set of windows and balconies, suggesting that it may face an open area, after all. Unless the developer or architect releases images or documents that clarify the situation, we have to wait and see how it works out as the building nears completion. That time does not seem distant, given the consistent pace observed so far. South portion of the site

The developer took advantage of the special Long Island City zoning exemption from minimum parking requirements, and did not include any parking within the project. Commuters would either have to compete for street parking, or make use of the building’s nearby public transit access. The elevated Queensboro Plaza station of the N, Q, and 7 trains sits on the other end of the block, accessible via a 500-foot-long walk to the southwest, putting Midtown Manhattan just one stop away. The Queens Plaza station of the E, M, and R trains lies a few blocks further, as do the Queensbridge/41 Avenue station of the F train and the Court Square Station of the E, G, M, and 7 trains. There are also several bus options located along the nearby Queens Plaza. Bike commuters would be serviced with a Citi Bike station at the foot of the Queensboro Bridge.