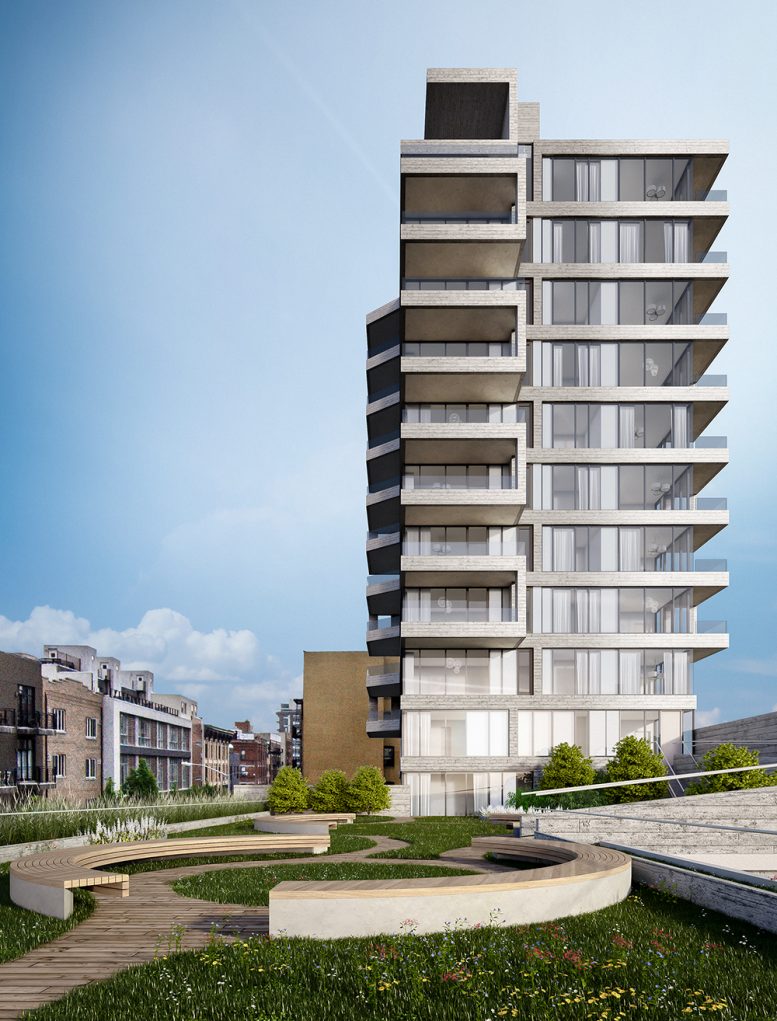 Not far from the L train sits a quiet Williamsburg corner where something has risen above all of its neighbors. It is 190 South 1st Street. The last time YIMBY checked on the project, it was just a black and white rendering. Now, it has topped out and is actually nearing completion. We recently were invited inside, and we also have the latest renderings of the project. Looking at the first and second floor community facility spaces

Since the project actually consists of two merged lots, the developers agreed that there would be community facility space. That will occupy parts of the first two floors. Rendering of a kitchen and living room Rendering of a studio Rendering of an interior Rendering of a master bathroom

As for amenities, they will include a limited number of parking spaces, attended by the building’s doorman, a 6,700-square-foot landscaped terrace on the third floor (atop the community facility space) with seating and grill areas, a gym, bicycle storage, and private storage. Rendering of the gym

Once you get a few flights up, it’s the views that impress. With nothing of similar height within the surrounding few blocks, you can get a clear view of the Williamsburg waterfront, including the Domino Sugar redevelopment, the recently-opened William Vale hotel, new projects in Manhattan such as 45 East 22nd Street, and the changing skyline of Long Island City. You can also see the Statue of Liberty and the Brooklyn, Manhattan, Williamsburg, and Queensboro bridges. View of the Statue of Liberty, Brooklyn Bridge, and Manhattan Bridge

190 South 1st Street is located on the corner with Driggs Avenue, about 10 minutes from the Bedford Avenue station on the L train. Of course, the L train to Manhattan is slated to be shut down for 18 months starting as early as 2019, but the Marcy Avenue station on the J, M, and Z trains is also about 10 minutes away. The Metropolitan Avenue stop on the G train is only a little farther. The building is currently nearing 80 percent complete, and is already 75 percent sold. Occupancy is expected in 2017.