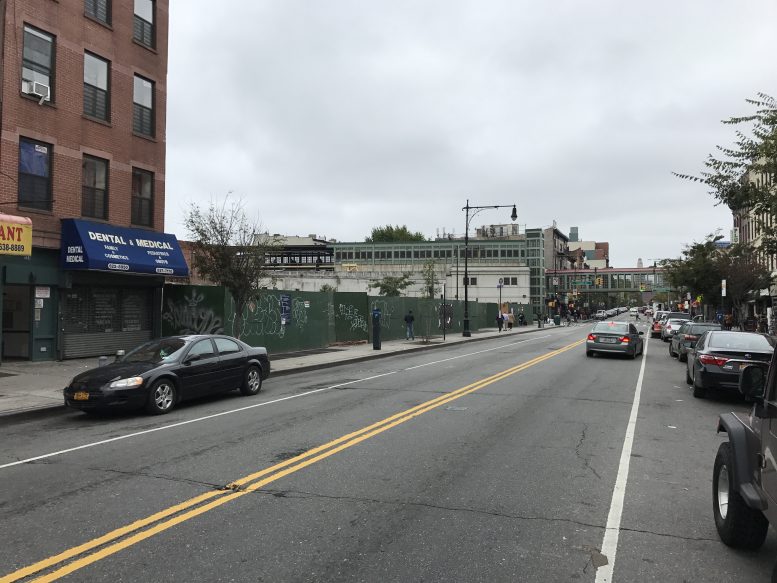 It’s been over a year since developer Joseph Brunner filed plans for an 11-story rental building with a grocery store at 1134 Fulton Street in Bedford–Stuyvesant. Tectonic swung by the site earlier this week, and the Key Food, Popeyes, and handful of small stores at the corner of Fulton and Franklin avenues have been mostly demolished.

The finished development will have 189 apartments, 20 percent of which will rent for below-market rates. The developer gets to build 30 percent larger in exchange for including the affordable housing, thanks to the Bloomberg-era Inclusionary Housing Program. Department of Buildings filings indicate that the building will hold 119 units and 89,489 square feet of residential space, but the floor area bonus for affordable units will likely boost the residential portion to 119,020 square feet.

Zoning caps heights for new buildings here at 100 feet, but the builders have evidently found a way to squeeze in 70 extra apartments without exceeding the height limit.

A grocery store will fill 18,462 square feet on the ground floor, for which the developer will get a tax break. A 72-car garage will occupy the second floor, and apartments will begin on the third floor. The third and fifth floors will have outdoor terraces, and the eighth floor will host a 1,400-square-foot roof deck.

Brunner scooped up the 24,700-square-foot site for $19,000,000 in May 2014 and filed plans a year later. Karl Fischer is designing the project, which promises to be boxy, glassy, and stepped. The Franklin Avenue stop on the C and shuttle trains is across the street.