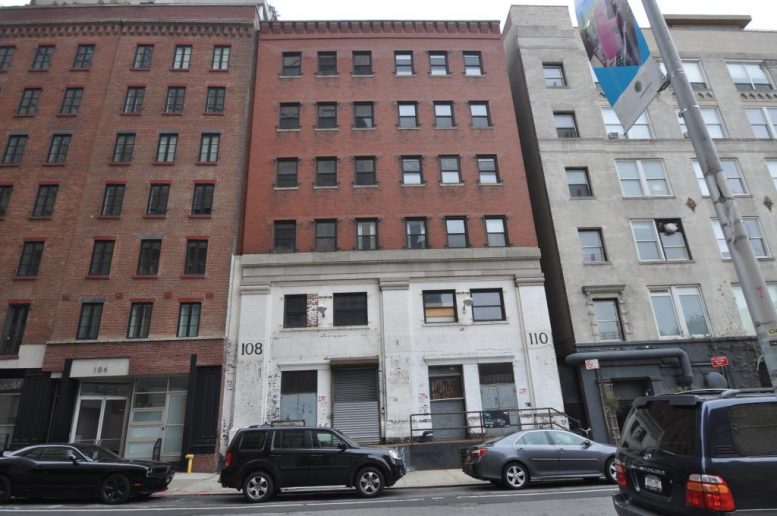 108-110 Charlton Street in 2014. photo by Christopher Bride for PropertyShark

The 290-foot-tall development would have 167 apartments spread across 225,802 square feet of residential space, plus a 2,800-square-foot retail space on the ground floor. Average units would come in at 1,352 square feet, and the developers confirm that they will be condos.

Each of the upper floors would hold three to eight units, and a shared roof terrace would top the 27th floor. Several apartments would come with private terraces. Residents would have access to a few amenities in the cellar, including a gym, storage, laundry, a “multipurpose room” on the ground floor, and a children’s recreation room on the second floor. A parking garage would fill portions of the first through fourth stories and offer room for 34 cars. Adamson Associates applied for the permits, but a rep for the developer tells us that another firm will design the facade. Above, we’ve included a small rendering posted on Cape Advisors’ website, which is “very preliminary,” according to the developer. Architecture firm Fernando Romero Enterprise (FR-EE) also designed a wonderful cantlivering tower for the site (pictured below) in 2014, but the interesting, glassy structure was ultimately scrapped.

The development site includes four warehouses and a mixed-use building with apartments and retail. Cape Advisors also shelled out $1,324,455 for air rights from a 70,000-square-foot warehouse next door on Vandam Street

Hudson Square was rezoned in March 2013, towards the end of the Bloomberg administration. The city chose to preserve manufacturing zoning there, but it created a special district that allowed residential development as-of-right on most lots.