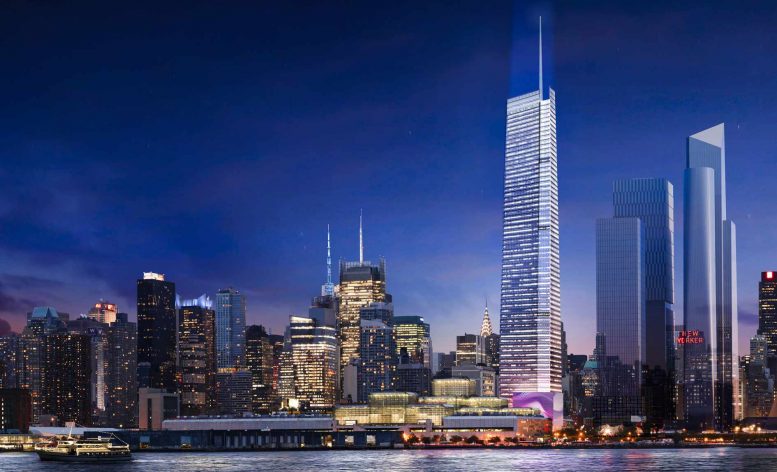 YIMBY reached out to Moinian regarding the changes, and the developer would neither confirm nor deny the latest iteration of 3 Hudson Boulevard, only affirming that plans have not yet been finalized. In either case, the tentative addition would push the tower’s height past that of 30 Hudson Yards, the crowning tower of the Eastern Railyards, in a 1920s-esque race to the clouds.

Back in 2012, YIMBY heard speculation that the tower, previously dubbed The Girasole, could rise as tall as 432 Park Avenue. While 1,350 feet isn’t quite 1,397 feet, the new height would certainly rival the supertalls of 57th Street, ranking in between 30 Hudson Yards’ approximately 1,300-foot parapet, and 432 Park Avenue, as the city’s fifth tallest building measured by pinnacle.

The actual tower portion of the structure is expected to rise 66 floors, topping out 1,050 feet above the streets below, and holding 1.8 million square feet of space. The base of the building will be clad in LED screens rising five floors, and the bulk of the tower is expected to house commercial space, though a residential component has not been ruled out for the uppermost floors.

No completion date has been formally announced, but foundation work for the supertall began in May of 2016.