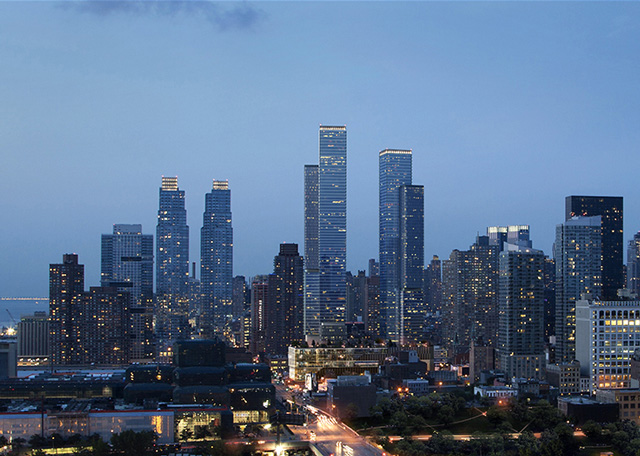 CetraRuddy is designing the tower, which will be the first of two buildings to rise; it will eventually be accompanied by a commercial high-rise of an even larger scope, with the aggregate total floor area amounting to about 1.6 million square feet.

The residential tower will also contain a substantial commercial component, totaling 62,960 square feet, and spanning the first through fifth floors. The Schedule A for the building shows an extensive amount of outdoor space on the fourth floor, to accompany a “physical cultural establishment”, perhaps referencing the elevated portion of Hudson Park and Boulevard, which will eventually stand next to the site.

Above the fifth floor, the tower will be exclusively residential, holding 499 units in 547,718 square feet of space. As YIMBY has previously reported, those are likely to be condominiums. While the previous designs for the project have ranged from the extremely creative to the supertall, CetraRuddy’s plans will likely sit somewhere between the two versions. The residential component will stand slightly taller than neighbors like Silver Towers, making it prominent on the skyline in its own right. Though the commercial tower may be larger in terms of total square footage, the larger floorplates that generally typify that kind of development in New York City means it is unlikely to be substantially taller than its sibling. No completion date has been formally announced, but with demolition on the old Mercedes dealership completed, excavation work can begin as soon as the applications are approved by the Department of Buildings. The old plans for a 1,400-foot and 106-story tower also came with a tentative expected delivery date of 2020.