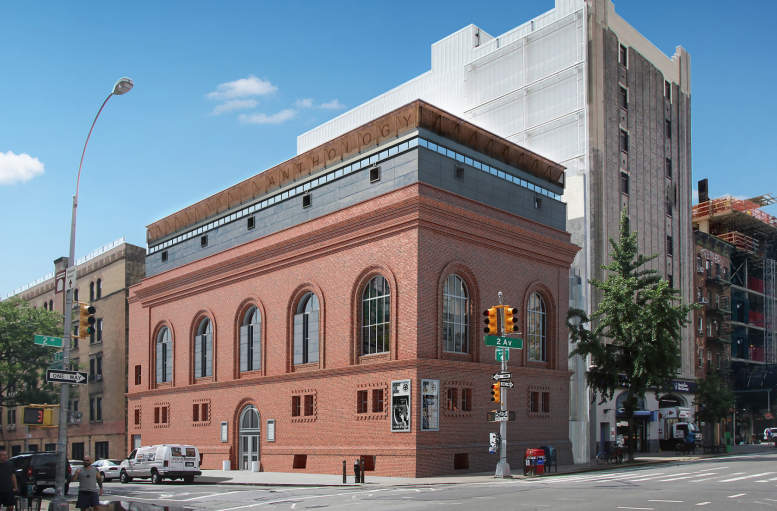 The existing building at 32 Second Avenue has stood on the corner of East 2nd Street since 1919, before being purchased and refurbished for Anthology Film Archives in 1979. Those revisions were designed by architects Raimund Abraham and Kevin Bone, and now Bone’s firm Bone/Levine Architects has submitted plans for a larger revision and expansion to the Landmarks Preservation Commission, which YIMBY can now reveal.

The plans will go before the LPC on Tuesday, and promise a positive and contextual addition to the existing structure. Though the extant building at 32 Second Avenue is quite attractive, the origins of its design were inspired by European prisons designed in the style of Renaissance Revival, and its initial purpose was to serve as both Court and Prison for the city. The structure was originally supposed to rise 17 floors in all, before several revisions resulted in the present-day three-story fortress, which was the home of the Third District Magistrate Court prior to 1948. Thereafter, the structure housed the Lower Manhattan Magistrate’s Courthouse, before it fell into disuse and neglect, and was purchased by Anthology Film Archives.

Now, Bone/Levine Architects has created an attractive plan that fulfills the original mission of the Anthology Film Archives, which had always intended to build both a library and a cafe space in the structure. The library will be located in the vertical expansion of the existing structure, while the “Heaven and Earth Cafe” will be built adjacent to the current building.

The submission to the LPC represents a major change from the previous iteration of the plans, which was substantially glassier. The extension of the facade will consist of a coated copper base, and accents clad in corten steel will line the windows of the library, which have been downscaled substantially. Above that, the addition will feature ‘Anthology Film Archives’ in metal-mesh lettering, covering the penthouse level of the project.

Anthology Film Archives’ expansion will measure a relatively small 14’4″, and even with the extension, the structure will be shorter than its neighboring buildings. While it would be excellent if the mission of the Archives’ could have even more space, in keeping with the intention of the original architect’s anticipated 17-story tower, the modest expansion is very contextual, and the attractive design combined with the quality of the materials means expedient approval is more likely than not.