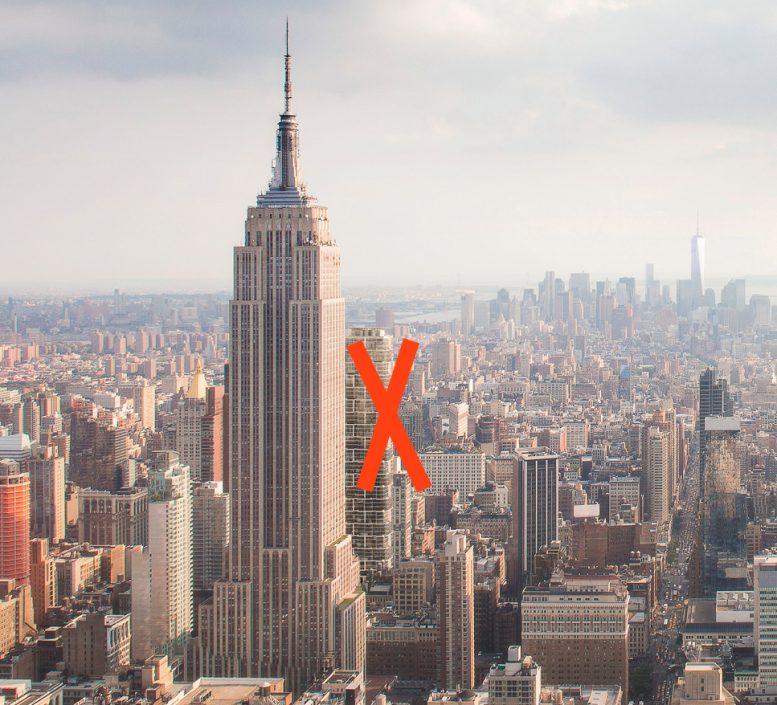 YIMBY has covered the tribulations of the Collegiate Church redevelopment since the wrecking ball descended upon the Bancroft Bank Building, and several of its neighbors. The project, given the address of 8 West 30th Street, then wound its way through the Landmarks Preservation Commission. Now, the Moshe Safdie design has been ditched for an office tower by Bjarke Ingels of BIG Architects.

Applications filed with the Department of Buildings show that while the total scope of the project has only shrunk somewhat — down to 301,167 square feet, all commercial — the height decrease has been more substantial, dropping from about 800 feet down to 551 feet, and 34 floors. Importantly, this will be significantly better for preserving the view corridor of the Empire State Building from lower Fifth Avenue, which will hopefully become even more iconic with BIG’s impending contribution to the skyline.

No renderings of the new design have been released yet, but HFZ Capital is still the developer, in this instance, doing business as HFZ KIK 30th Street LLC.

Since plans were originally proposed in 2015, several adjacent residential towers have either joined the pipeline, or begun construction. 277 Fifth Avenue is now rising across from the Church, and one block to the south, demolition is wrapping for Boris Kuzinez’ 262 Fifth Avenue, which will top 1,000 feet. To the northeast, 15 East 30th Street is also getting ready to begin climbing.

That makes for a substantial amount of new inventory in a very limited amount of real estate, which probably explains HFZ’s decision to switch to office. The developer is also partnering with BIG on 76 11th Avenue, next to the High Line.

No completion date for 3 West 29th Street’s new design has been announced.