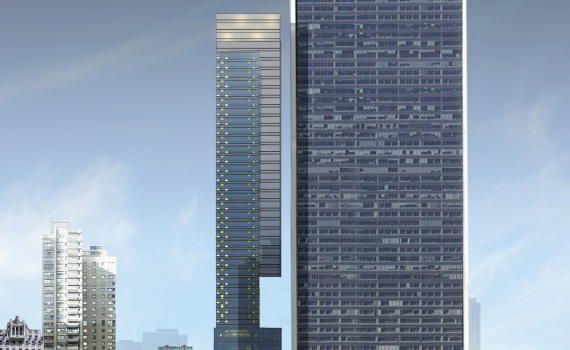 Situated to the west of the Solow Building on a site that was once the home of the original Rizzoli Bookstore and several other low-slung buildings, 27-33 West 57th Street is one of the most prime sites on Billionare’s Row. The property is in the hands of developer LeFrak, and today YIMBY has the first look at what may eventually rise on the Midtown site in the near future.

The rendering shows a relatively tall glass skyscraper, shorter than the Solow Building, with a noticeable cantilever starting several floors above street level on the eastern side. The plans bear a substantial resemblance to Central Park Tower being built to the west, by Columbus Circle.

Not much has been said about the new rendering, or the type of building it will become, though another residential tower appears most likely. A six-star hotel had previously been mentioned as a possible occupant.

It may not have a supertall status, but it does look like the occupants will have unimpeded views of Central Park since the majority of the building stands above the old pre-war buildings along 59th Street. No completion date has been announced.