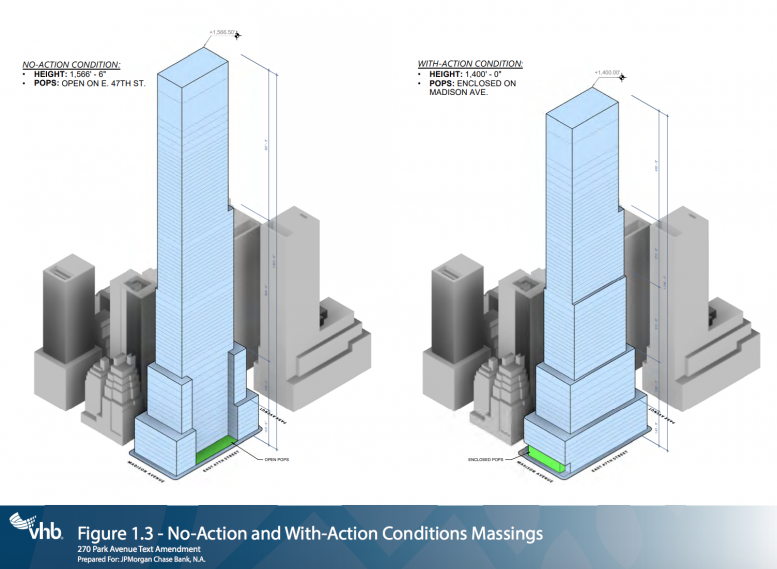 270 Park Avenue without & with action, image from City Planning

With the number of supertalls on the Manhattan skyline doubling within the past year, it is easy to forget about impending proposals not yet out of the ground. But now, the second supertall to result from the Midtown East rezoning is moving forward, with JPMorgan Chase filing a text amendment with City Planning for a 1,400-foot tower on the site of 270 Park Avenue. Designed by Foster + Partners Architects, the plans also come with the first renderings of the 2.4 million square foot supertall, and massing diagrams that offer a look at what’s in store for New York City’s most central business district. 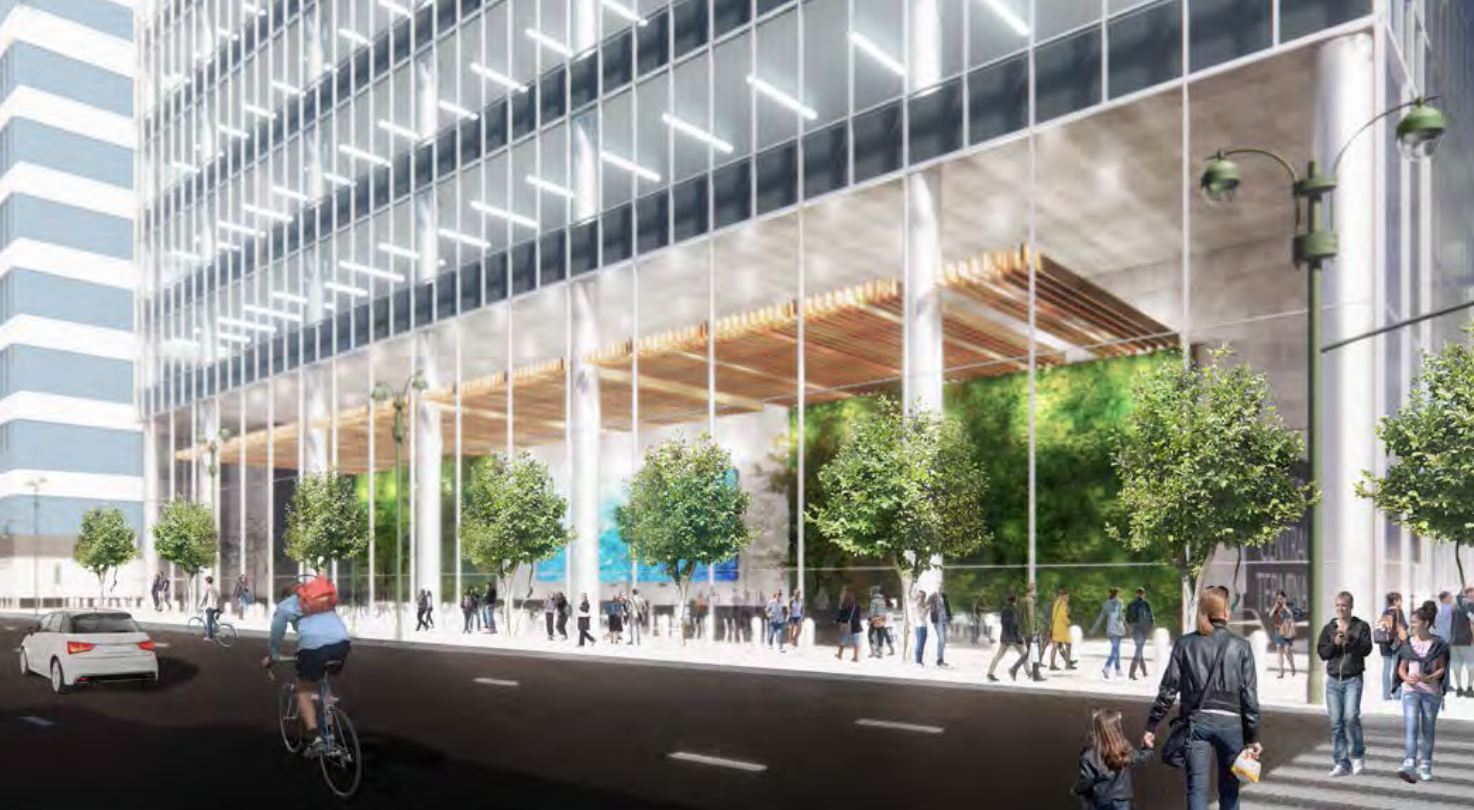 The plans include two options, showing what is possible without the text amendment, and what could occur with its adoption. The without-action tower would stand a whopping 1,566’8″ to its rooftop, becoming the tallest tower in the city by roof height, surpassing Central Park Tower’s imminent pinnacle 1,550 feet above street level. But the with-action version, which is what JPMorgan wants to actually build, would top out 1,400 feet above street level.

Either option would make a very substantial impact on the Midtown East skyline. One Vanderbilt will stand 1,401 feet to its rooftop, but a very large portion of the tower’s uppermost profile above the 1,000 foot mark will be either glass or spire. In 270 Park Avenue’s case, the with-action options shows a solid vertical profile all the way to 1,400 feet, promising what could become the City’s most prominent massing at such a height.

The proposal also comes with renderings of the street frontage for both possibilities. The options aren’t too revealing, but they do show a frontage lined in metal and glass that is somewhat reminiscent of Foster + Partners’ plans for 425 Park Avenue, about a dozen blocks to the north, which recently reached the top of its superstructure.

Inside, the with-action condition would result in a total scope of 2,420,609 square feet, a 1,232 square foot increase over what could be build otherwise. That difference is entirely attributable to the indoor public space, which would technically increase the tower’s size by 7,000 square feet, and consequently its office component would shrink by 5,768 square feet, to 2,348,490 square feet. The retail and cellar spaces would remain unchanged in size, totaling 6,475 square feet and 58,644 square feet, respectively.

After review, the City has already found the change would not result in any negative environmental impacts. 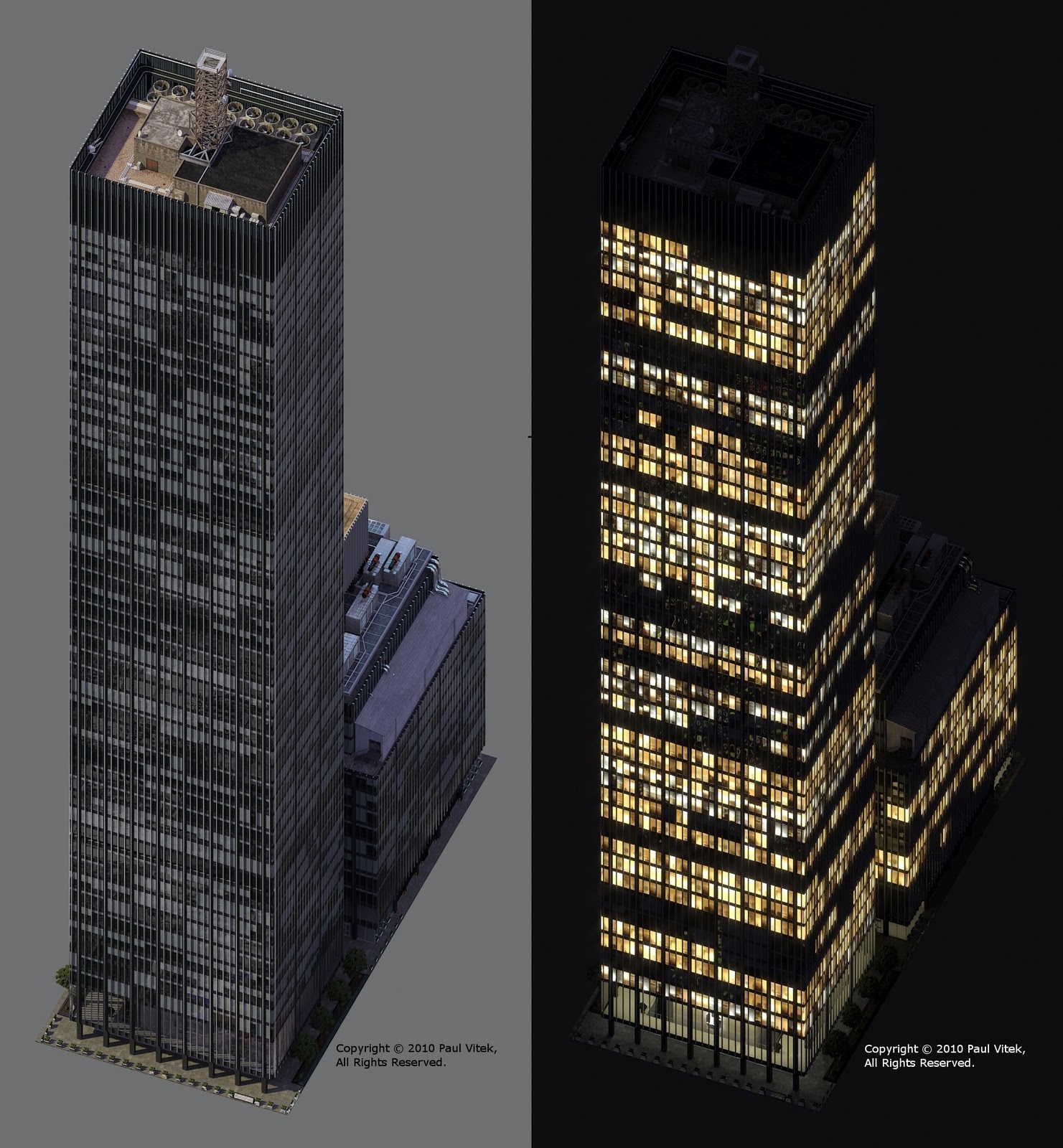 The existing building at 270 Park Avenue is occupied by JPMorgan Chase and was designed in 1957, and completed in 1961. The architect is Natalie Blois of Skidmore Owings & Merrill, LLP, and it was most recently fully renovated to LEED-Platinum status in 2012. However, that was prior to the Midtown East rezoning’s unlocking of the site’s newfound potential.

Demolition of the extant structure is expected to be complete by 2020, and JPMorgan Chase is aiming to have their new headquarters finished in 2024.