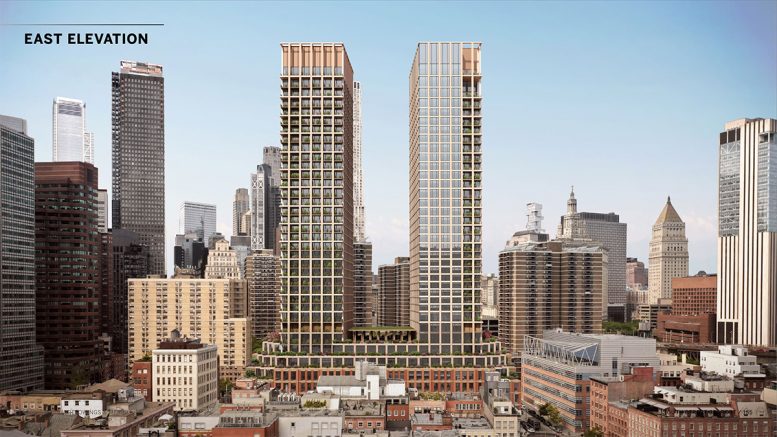 Located at the edge of the South Street Seaport Historic District, the undeveloped lot at 250 Water Street encompasses a large city block and has sat mostly vacant for many years. The proposed development would occupy the entire plot, including a low-rise podium and two 38-story towers with a mix of community spaces, office suites, residences, and associated amenities.

The overall height of the building is made possible through a proposed transfer of 445,000 square feet of unused development rights from an adjacent site within the South Street Seaport Historic District. If approved, the new structure would comprise up to 757,400 buildable square feet and top out at approximately 470 feet above ground. 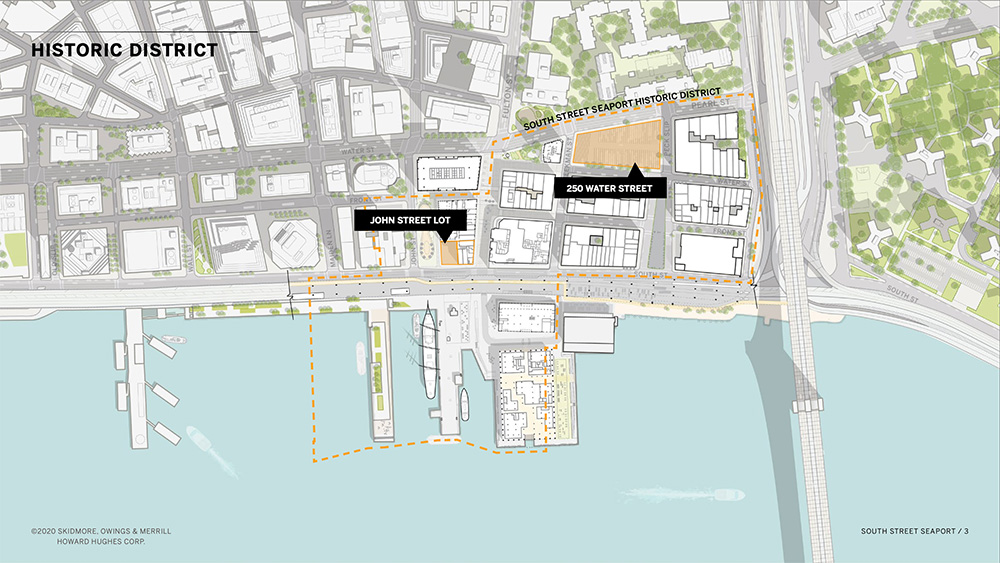 To reduce the visual impact of the two new towers on the existing streetscape, the high-rise volumes will sit atop a five-story podium and be set back from the Water Street elevation.

The façade of the podium will be mostly comprised of red brick masonry and large floor-to-ceiling windows. Above these levels, curtain wall materials will include precast concrete and large windows with powder-coated aluminum mullions.

Residential area will account for the majority of floor space within the proposed towers and will occupy the 11th through 34th floors. Residential amenity spaces will primarily occupy the eighth floor. If approved, the towers will contain a collection of 360 new apartments. Around 100 units will be reserved for individuals and households earning 40 percent of the area median income.

Commercial area will occupy the ground through seventh floors. 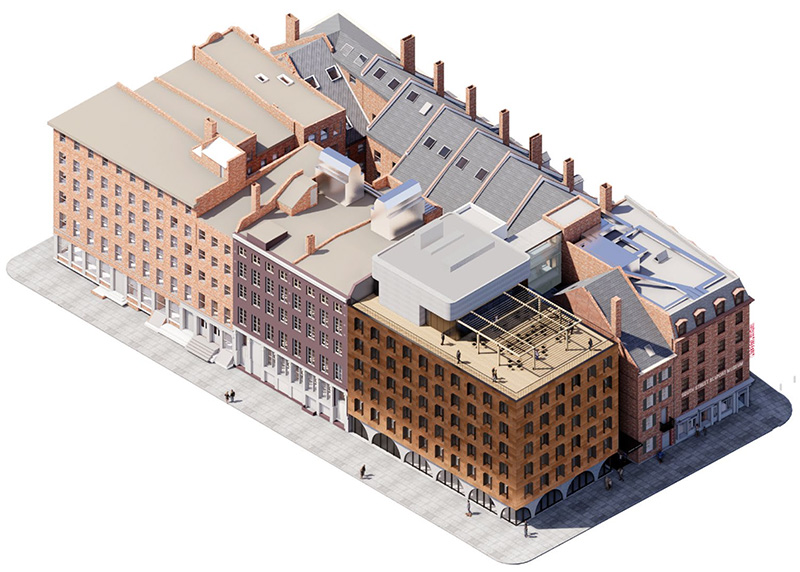 The existing South Street Seaport Museum is located at 12 Fulton Street with additional frontage along South Street. The proposed expansion will occupy a neighboring vacant lot at the corner of John and South Streets.

Renderings of the new museum building illustrate a six-story building with a punched copper facade that will slowly oxidize into a green patina, grid-spaced window openings, black shutters that open out above both John and South Streets, and an outdoor roof deck.

Within the existing museum and the new volume, many of the gallery spaces will be reactivated and modernized for a contemporary viewing experience.

If approved by the LPC, the new building will connect into the existing museum via a multi-story, glass-enclosed addition along South Street. Additional scope of work includes repairs to the existing historic façade. 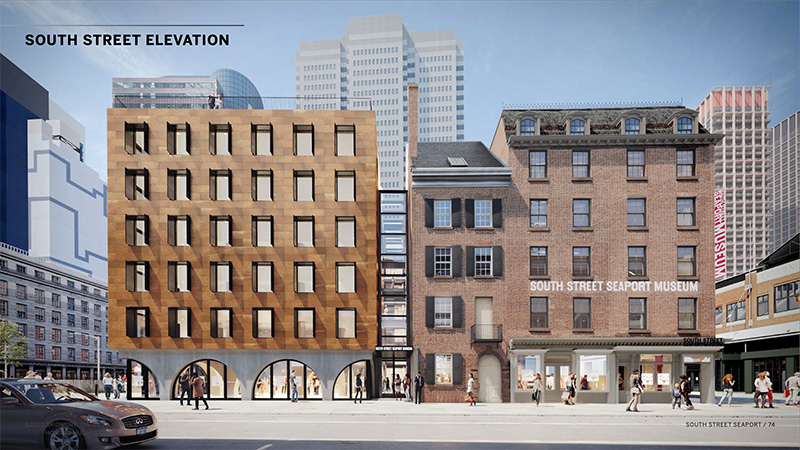 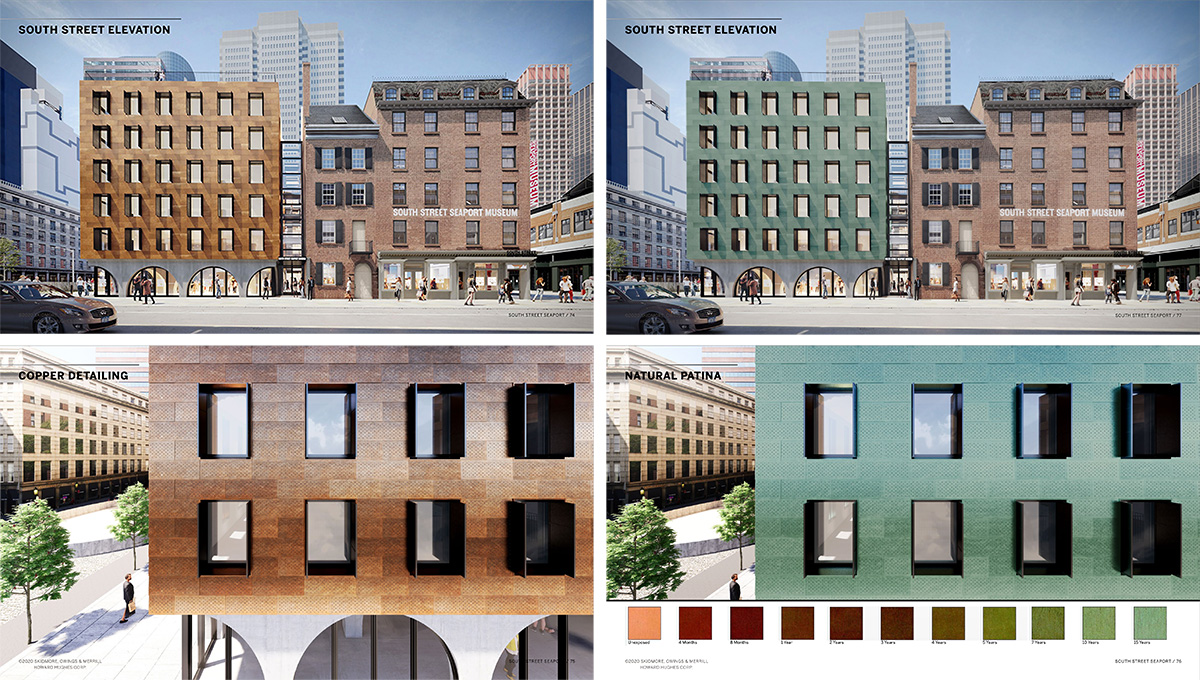 The developer has also proposed a $50 million contribution to the South Street Seaport Museum if the project is allowed to move forward. Considering the museum’s active role in the preservation and revitalization of the surrounding district, the infusion of funds is expected to dramatically impact the efficacy and longevity of the museum’s efforts.

A virtual hearing for the project is scheduled to take place today, January 5. Considering the current phase of proposals, additional details regarding project schedule are not yet available.