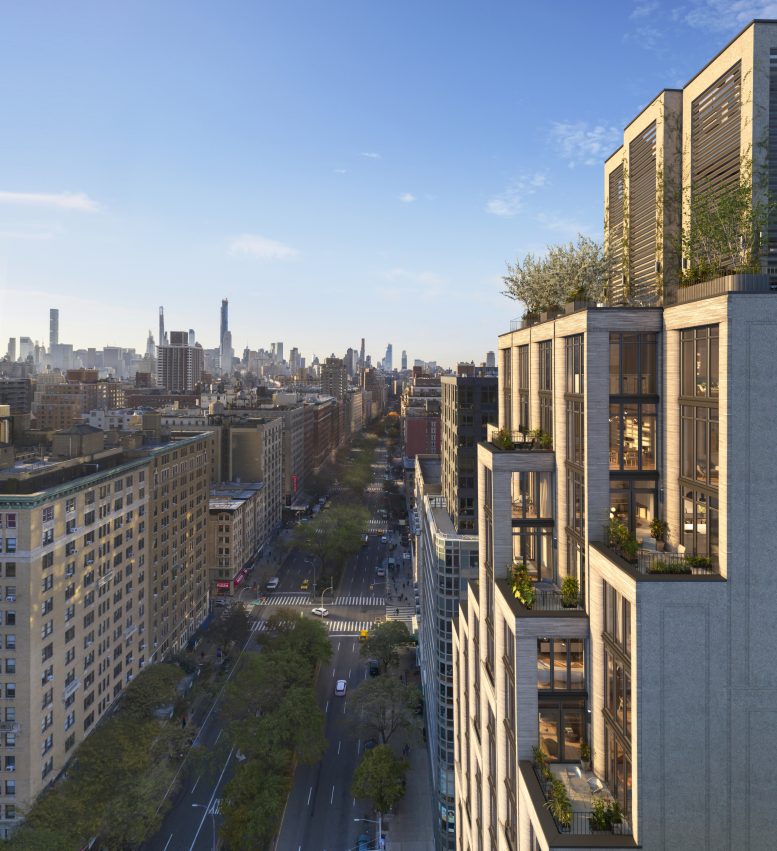 New renderings have been revealed for ODA Architecture‘s 2505 Broadway, a 19-story residential building on Manhattan’s Upper West Side. The renderings depict the upper and ground-floor levels of the structure, which is topped out at the corner of Broadway and West 93rd Street. ODA is also designing the interiors of the property and its 44 residential units, averaging 1,934 square feet apiece. Adam America Real Estate is the developer for the 75,000-square-foot structure, which will also feature 5,000 square feet of ground-floor retail space. Douglas Elliman Development Marketing is handling sales and marketing for the project.

The aerial rendering gives an impression of the views looking south toward Midtown and shows the multiple setbacks on the upper floors of 2505 Broadway. Black metal railings line the edges of the numerous landscaped outdoor terraces, while the brick masonry walls elegantly curve away from each slightly recessed window, giving an extra layer of depth and quality to the fenestration. The extended mechanical units sit atop a large outdoor terrace space and will be hidden behind a series of horizontal metal grilles as well as shrubs and tall trees. Spotlights and climbing vines can be seen attached to the walls in between the grilles, so we could expect the leaves and branches to be boldly illuminated at nighttime.

The second rendering is of the ground floor with the main entrance in focus. A dark-colored rectangular metal canopy is held up by wires over the sidewalks along Broadway, covering the double-door entrance with floor-to-ceiling glass panels that frame the main lobby and the marble interior walls. We can also get a better perspective of the brick layout and its varying shades across the columns and between the windows. A subway entrance to the 96th Street station is conveniently found in front of 2505 Broadway with access to the 1, 2, and 3 trains.

Homes range from one- to four-bedroom layouts, as well as two townhouses and a four-bedroom penthouse with its own private rooftop terrace offering views of the Hudson River. Each residential floor shares either one or two other units. Residential amenities include a fitness center, a children’s playroom, a sports court, a pet spa, a library lounge, and multiple private outdoor spaces.

YIMBY previously reported that 2505 Broadway is expected to be completed at the end of 2021.