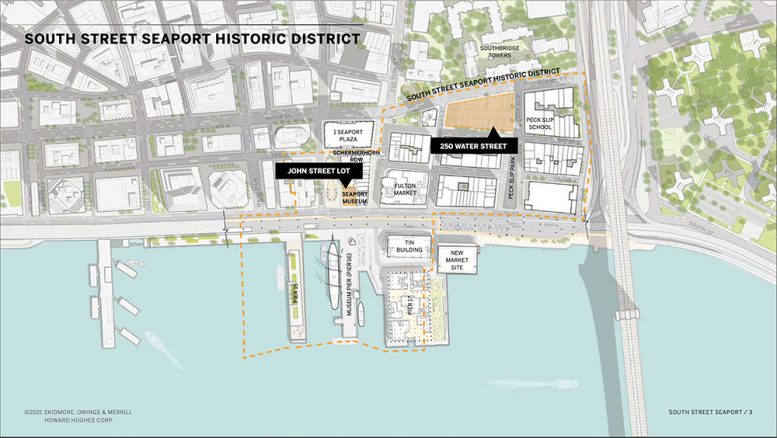 Plans to construct a pair of high-rise towers at 250 Water Street in the South Street Seaport Historic District have been dramatically scaled down, as revealed in updated proposals from Howard Hughes Corporation and Skidmore, Owings & Merrill. Additional members of the project team include architects JHPA and historic preservation consultants Higgins Quasebarth & Partners.

Located at the edge of the South Street Seaport Historic District, the undeveloped lot at 250 Water Street encompasses a large city block and has sat mostly vacant for many years. The proposed development would occupy the entire plot, including a low-rise podium, and now, a tight cluster of four mid-rise volumes. The towers will top out at 345 feet, which is a grand departure from the previously proposed twin towers that would have peaked at 470 feet. 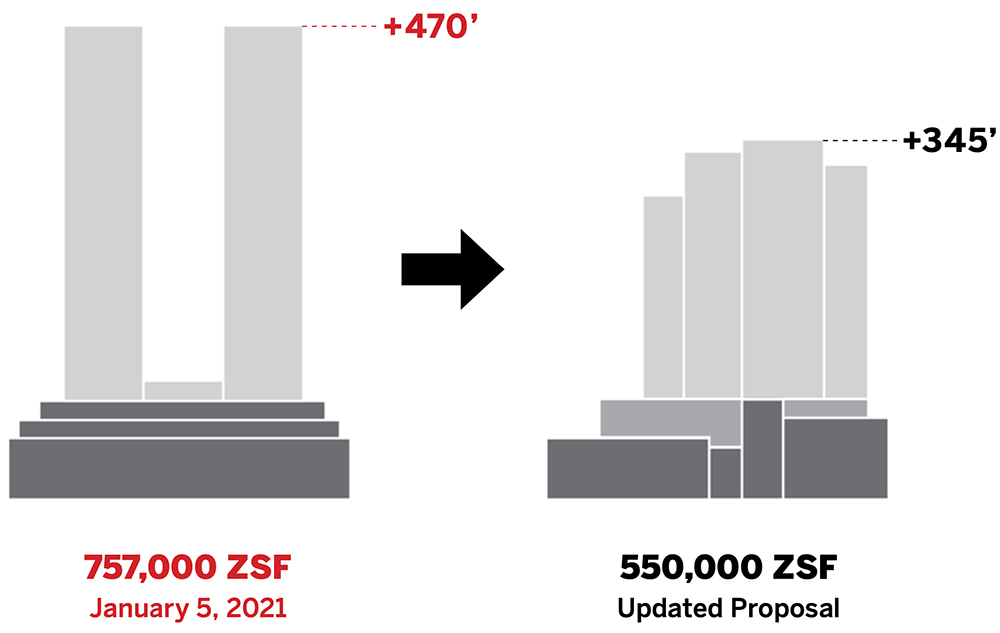 At the podium levels, the architects have also reduced the height of the street wall to better complement the existing character and proportion of the neighboring low-rise buildings along Water Street. The tower volumes are also shifted further away from Water Street and closer to the Pearl Street elevation.

The façade details along Water Street are now less ornate and comprise a more traditional mix of red brick masonry, cast stone lintels, and window frames painted in a complementary red pigment. Retail bays at the base of the building are framed by vertically fluted cast stone posts and floor-to-ceiling windows that are also framed in rust red-painted metal framing.

The entire wedge-shaped lot will be surrounded by bluestone and cobblestone paving, seating blocks, and a sprinkling of trees for shade. 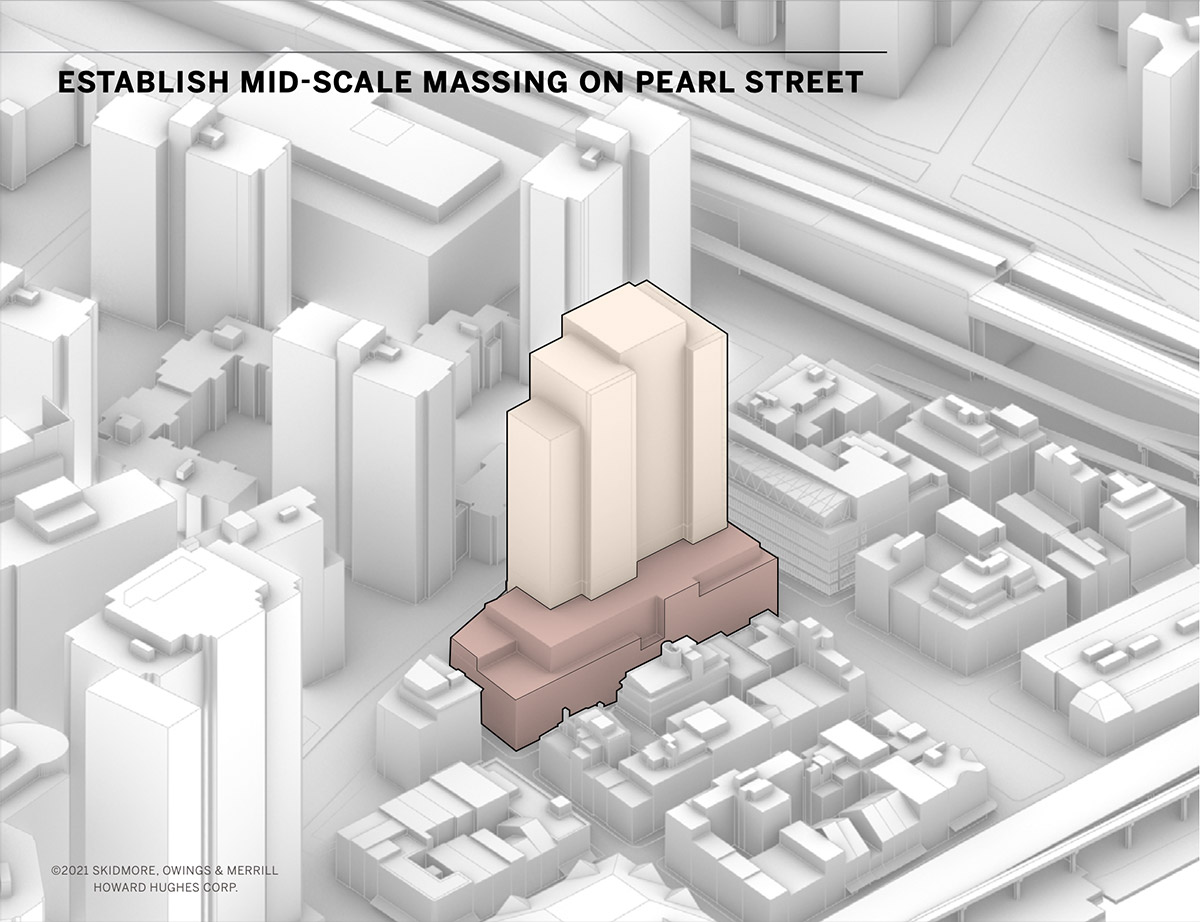 The development will eventually house a mix of community spaces, office suites, residences, and associated amenities. Previous proposals specified that around one-third of the residences would be reserved for individuals and households earning 40 percent area median income. It is unclear if the property will yield the same mix of market rate and income-restricted units.

The existing South Street Seaport Museum is located at 12 Fulton Street and the proposed expansion will occupy a neighboring vacant lot at the corner of John and South Streets. In response to initial proposals, the Landmarks Preservation Commission requested changes to the building’s copper treatment and a reduction in bulkhead height.

The proposed changes to the museum are much less drastic as revealed in new renderings from Skidmore, Owings & Merrill. This includes black metal treatments for the railing surrounding the roof deck, an overhead pergola, and screening that surrounds the building mechanicals. 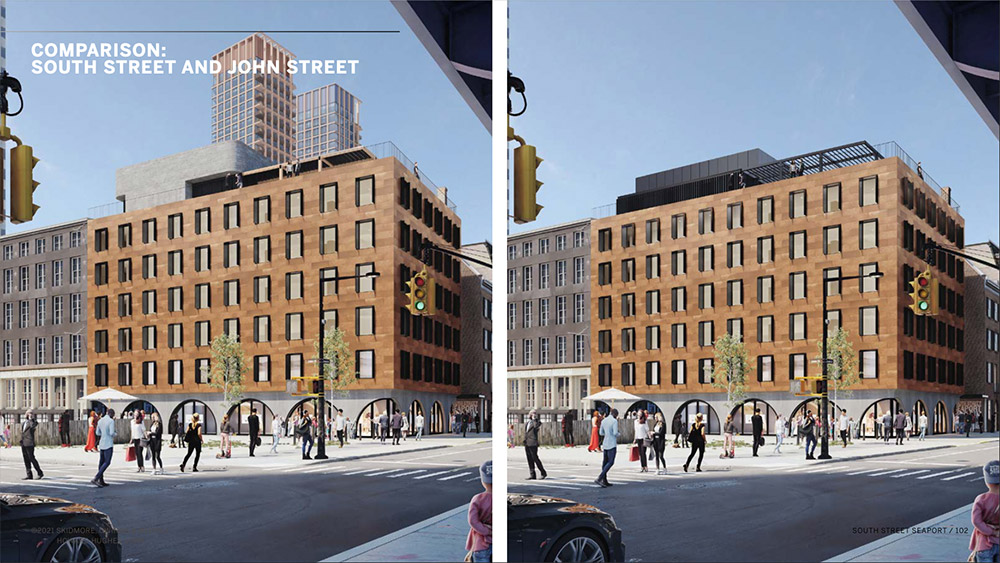 A public hearing for the project took place yesterday April 6 in a virtual forum coordinated by the Commission. It is not yet clear if the project will be issued a Certificate of Appropriateness to begin the project.