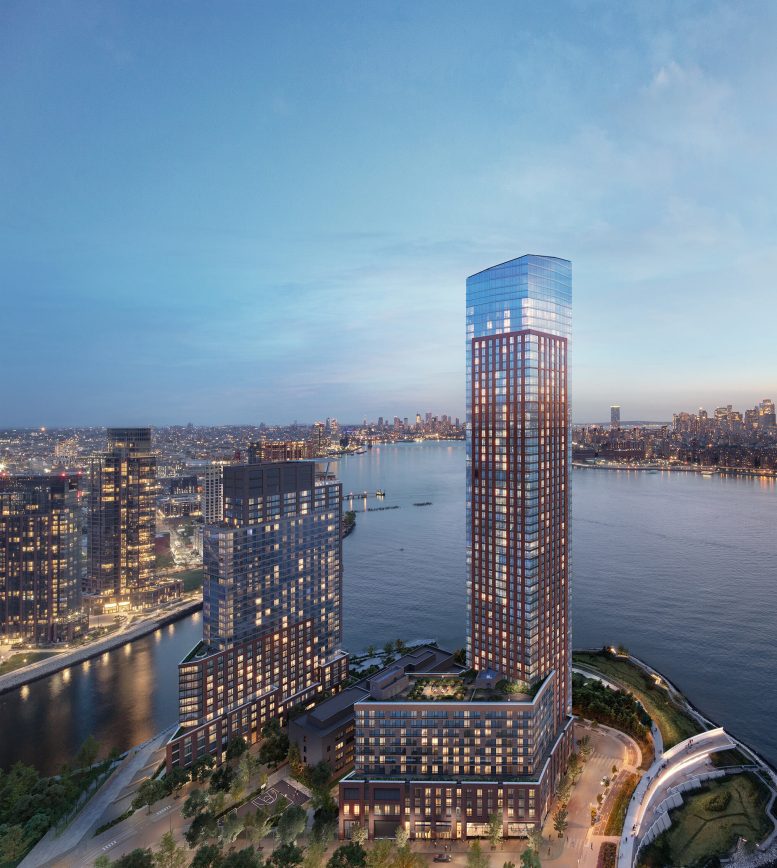 At number 30 on YIMBY’s annual countdown of the 31 tallest buildings under construction in the New York City metropolitan region is Parcel F, a 559-foot-tall residential skyscraper in the two-tower Gotham Point development in Hunters Point South, Queens. Designed by Handel Architects and developed by The Gotham Organization, RiseBoro Community Partnership, Goldman Sachs Urban Investment Group, and the Department of Housing Preservation and Development (HPD), the 57-story structure stands alongside its 33-story, 443-foot-tall sibling Parcel G, collectively yielding over 1 million square feet and 1,132 rental apartments. Of these, 75 percent will debut as affordable housing and age-restricted homes for seniors. The development is bound by Center Boulevard to the north, 56th Avenue to the east, and 57th Avenue to the west, and also features a five-acre waterfront park constructed by New York City’s Economic Development Corporation and a 1,100-seat Intermediate High School built by the School Construction Authority. Handel Architects is also the interior designer while BHDM was responsible for the interiors of the model apartment.

Exterior renderings below show the wide panoramic views of Midtown, Manhattan and the finished look of the brick and glass envelope. 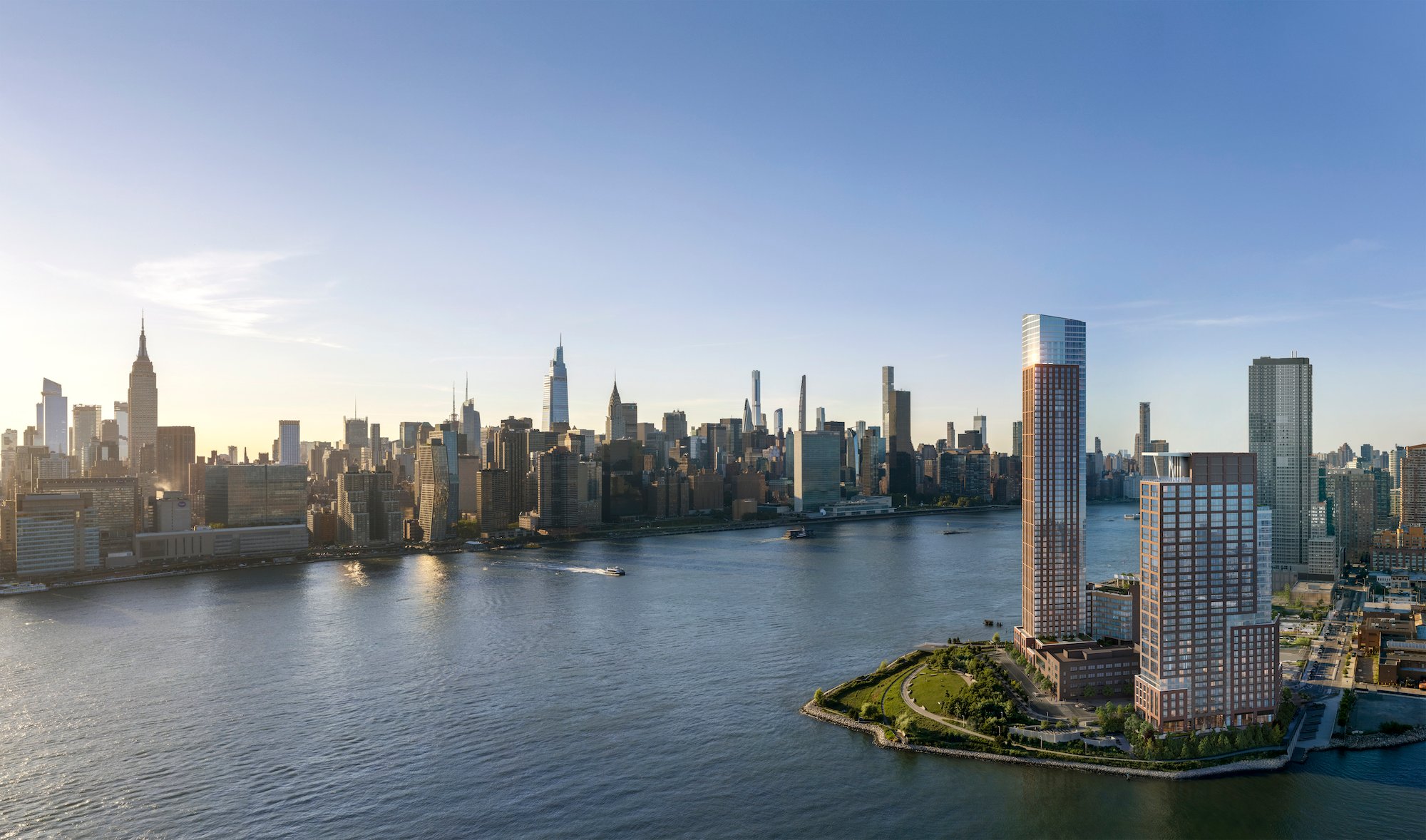 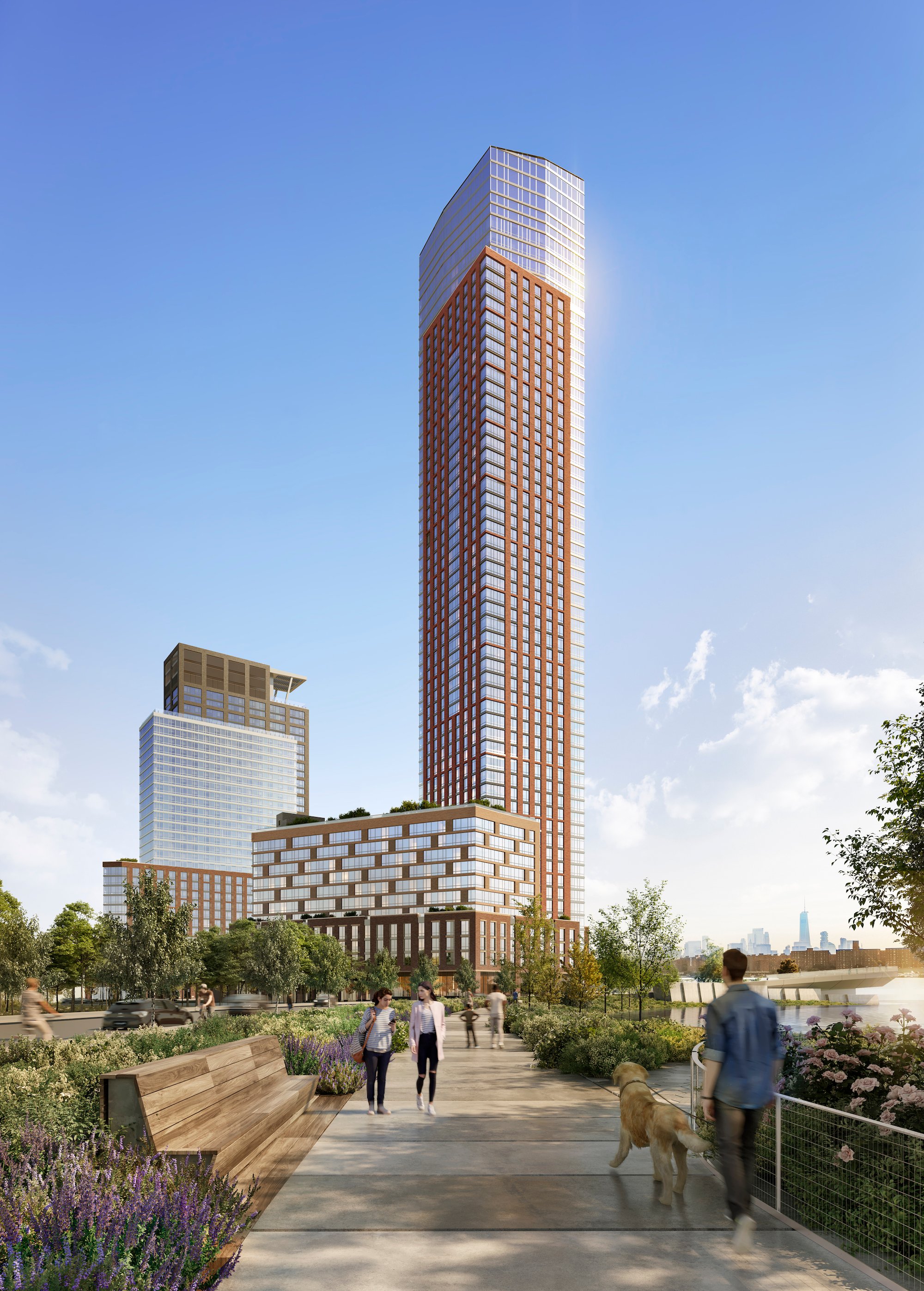 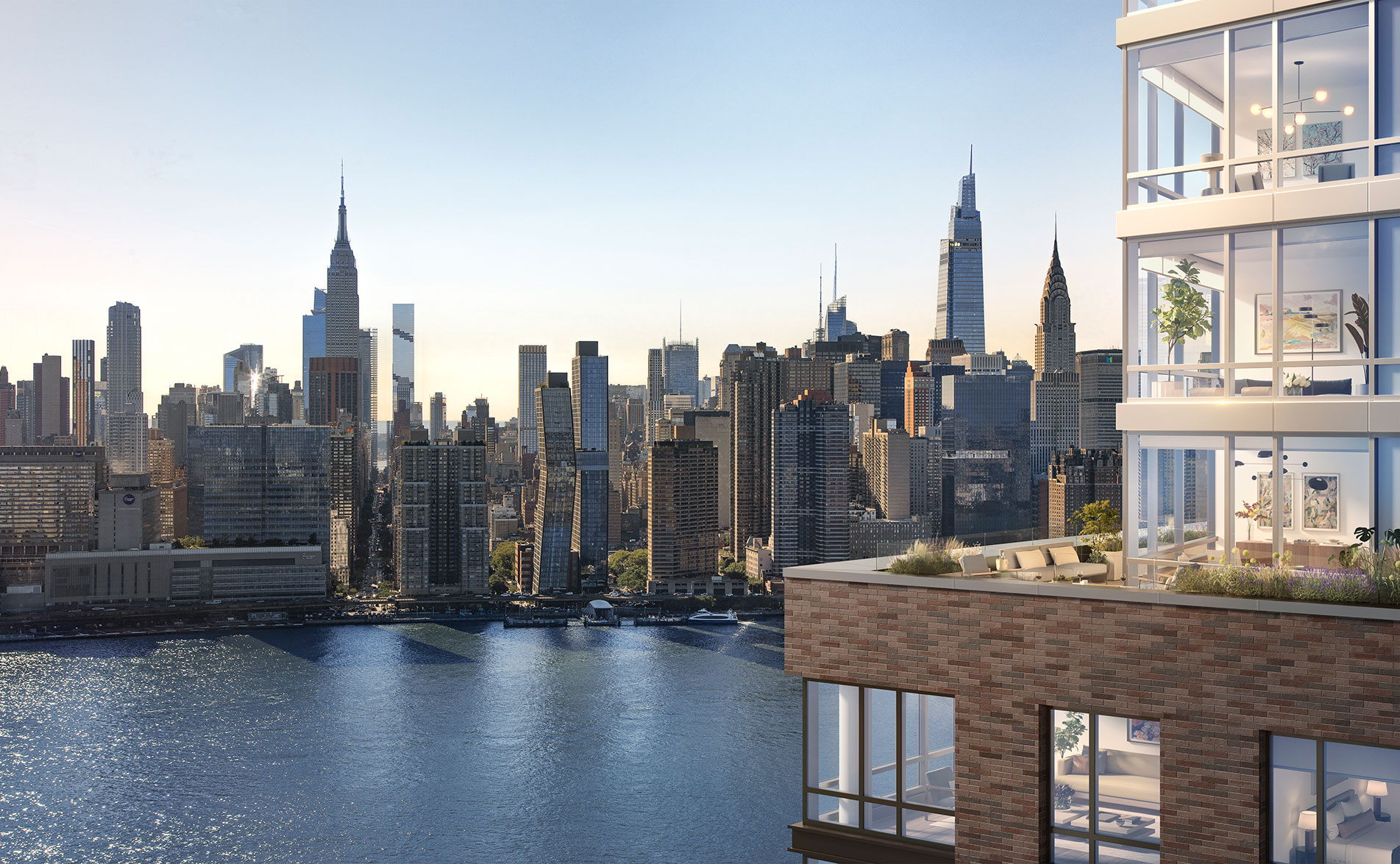 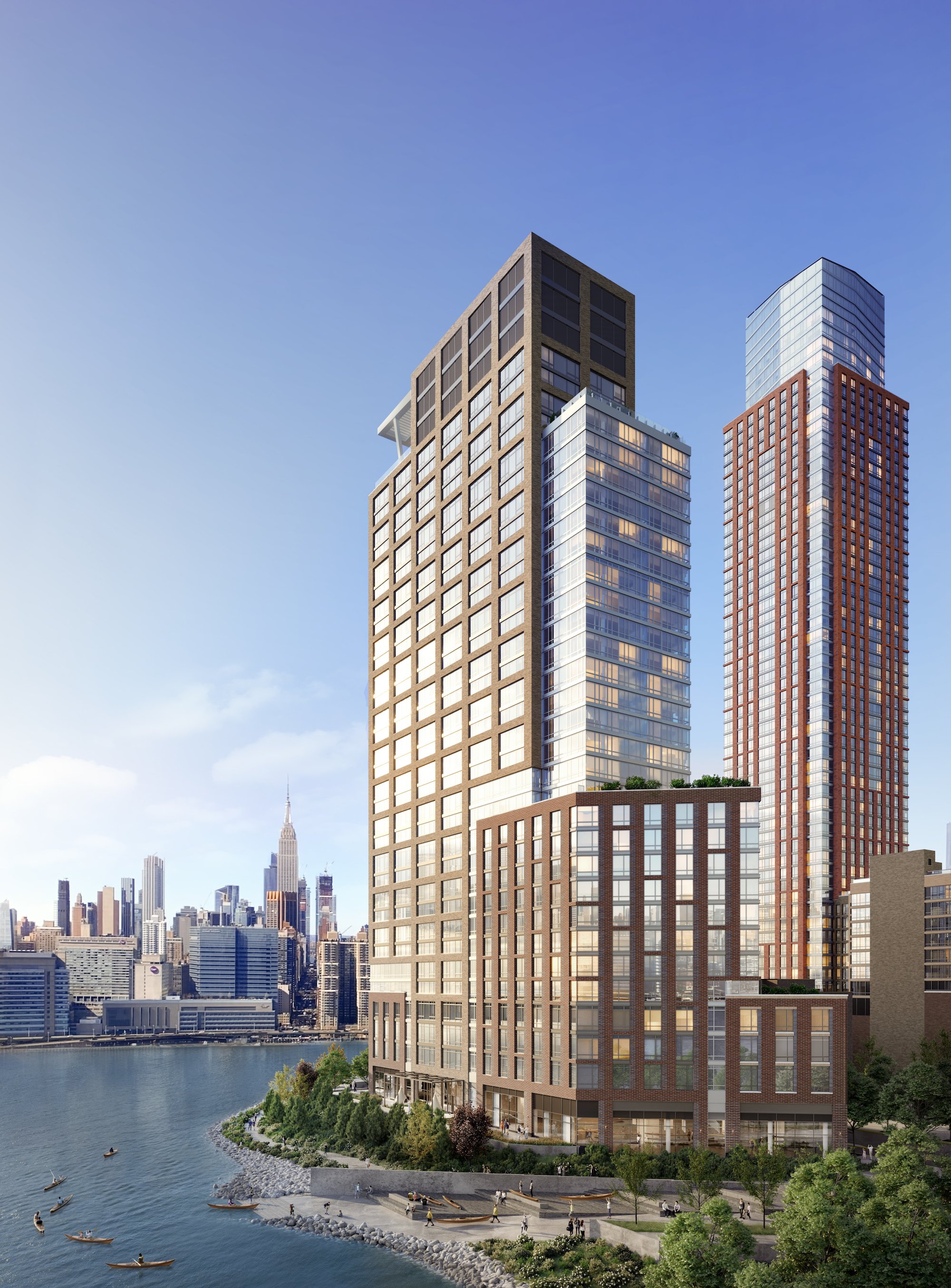 Parcel F has fully topped out since our last update in October, when the reinforced concrete superstructure had recently reached its final floor plate. Now the sloped, steel-framed crown is erected and sits awaiting its glass cladding.

Photographs from the East River show the difference in scale of both buildings and their presence among Hunters Point South and the nearby Greenpoint, Brooklyn neighborhood, which is also undergoing a tremendous residential boom just across Newtown Creek. The brick façade and floor-to-ceiling windows are steadily making their way up Parcel F while the construction crane on the southern elevation is coming down. 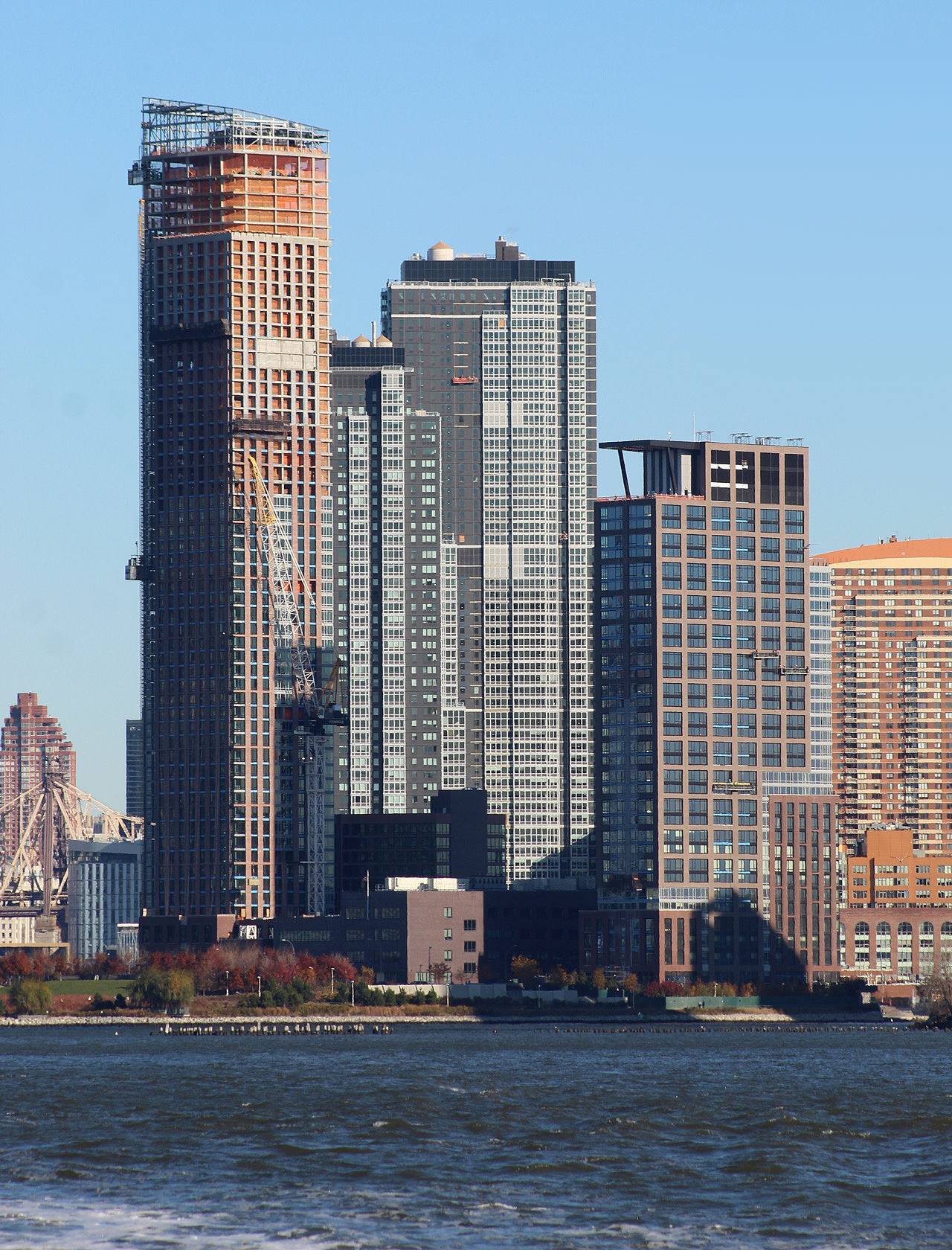 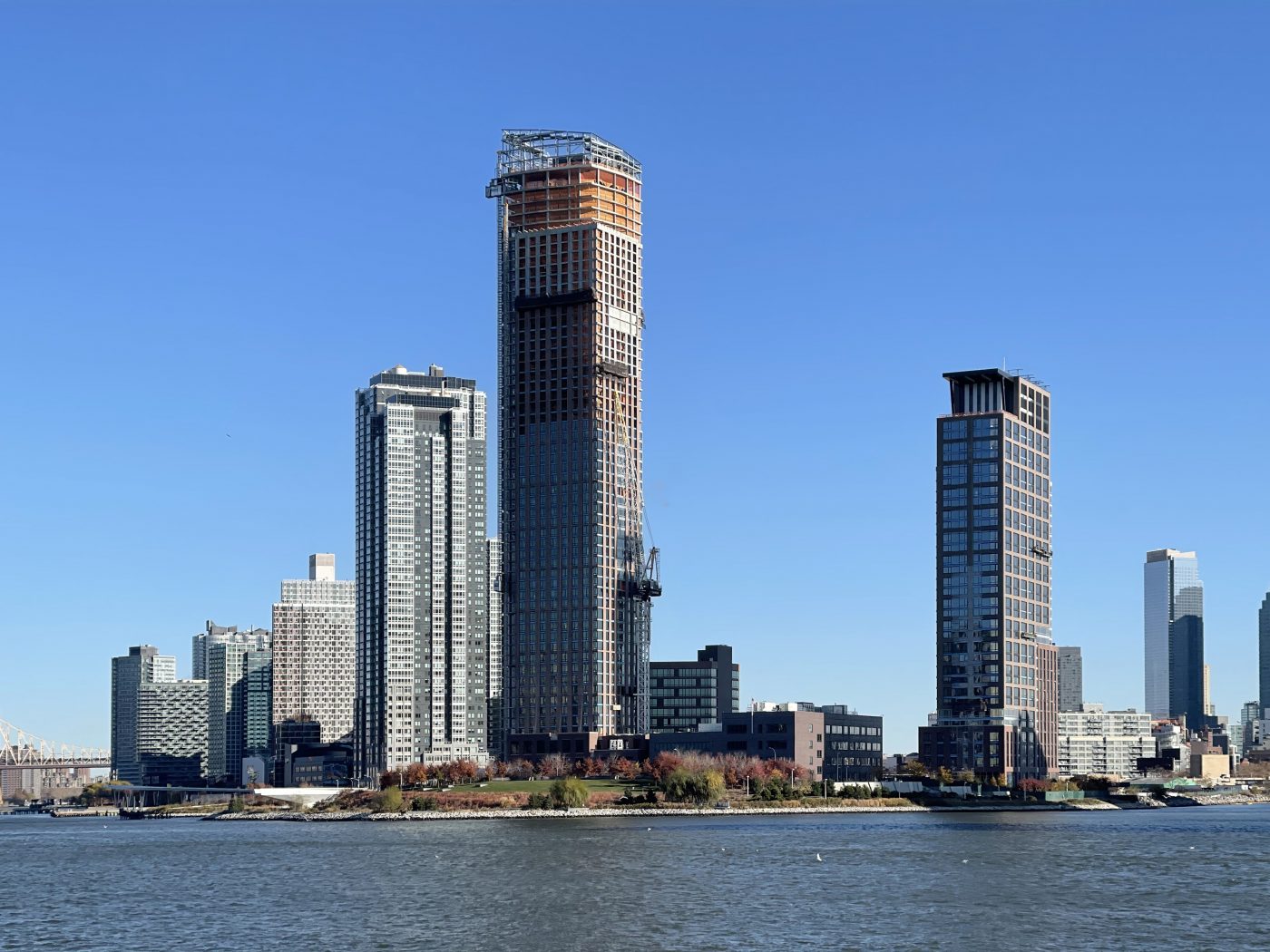 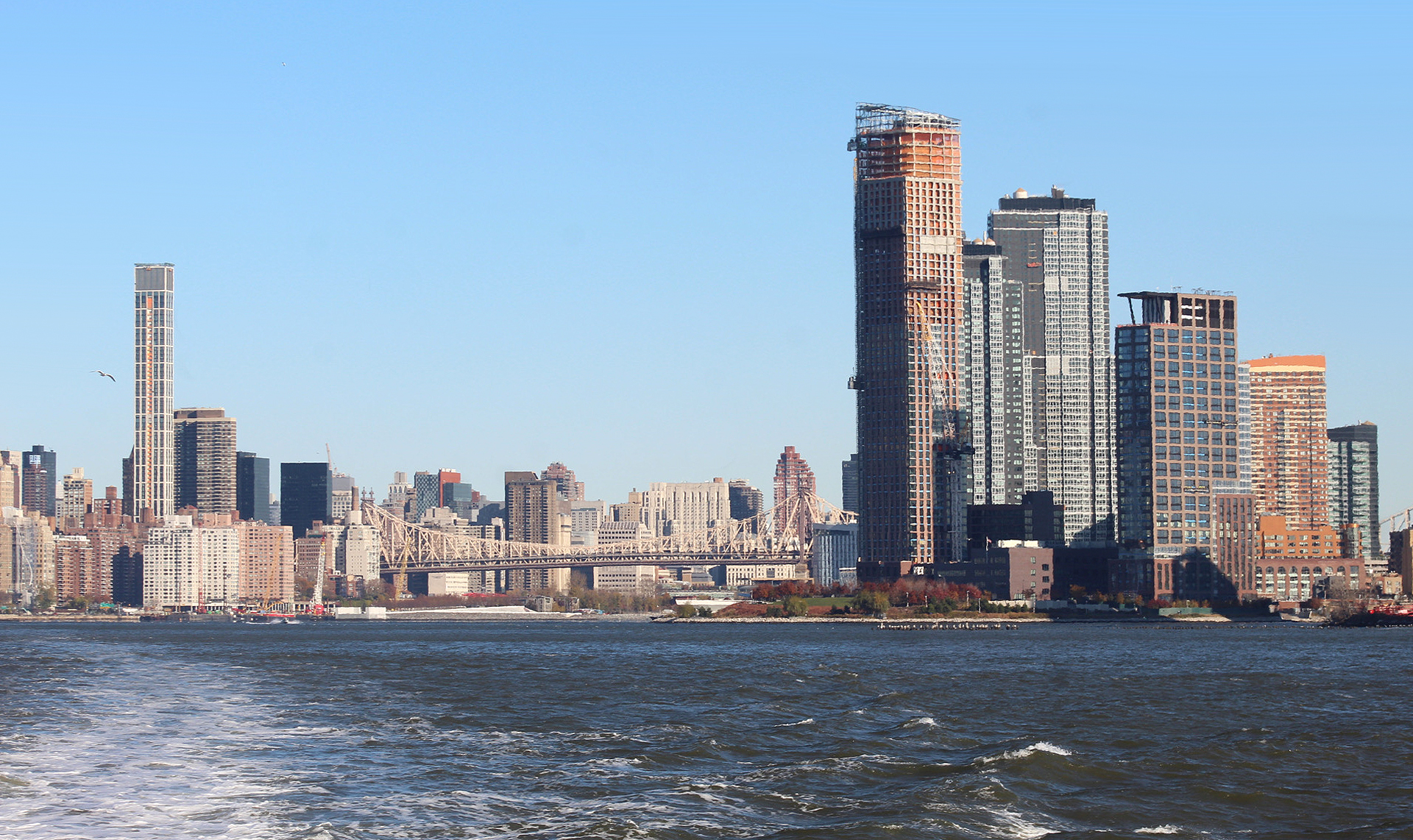 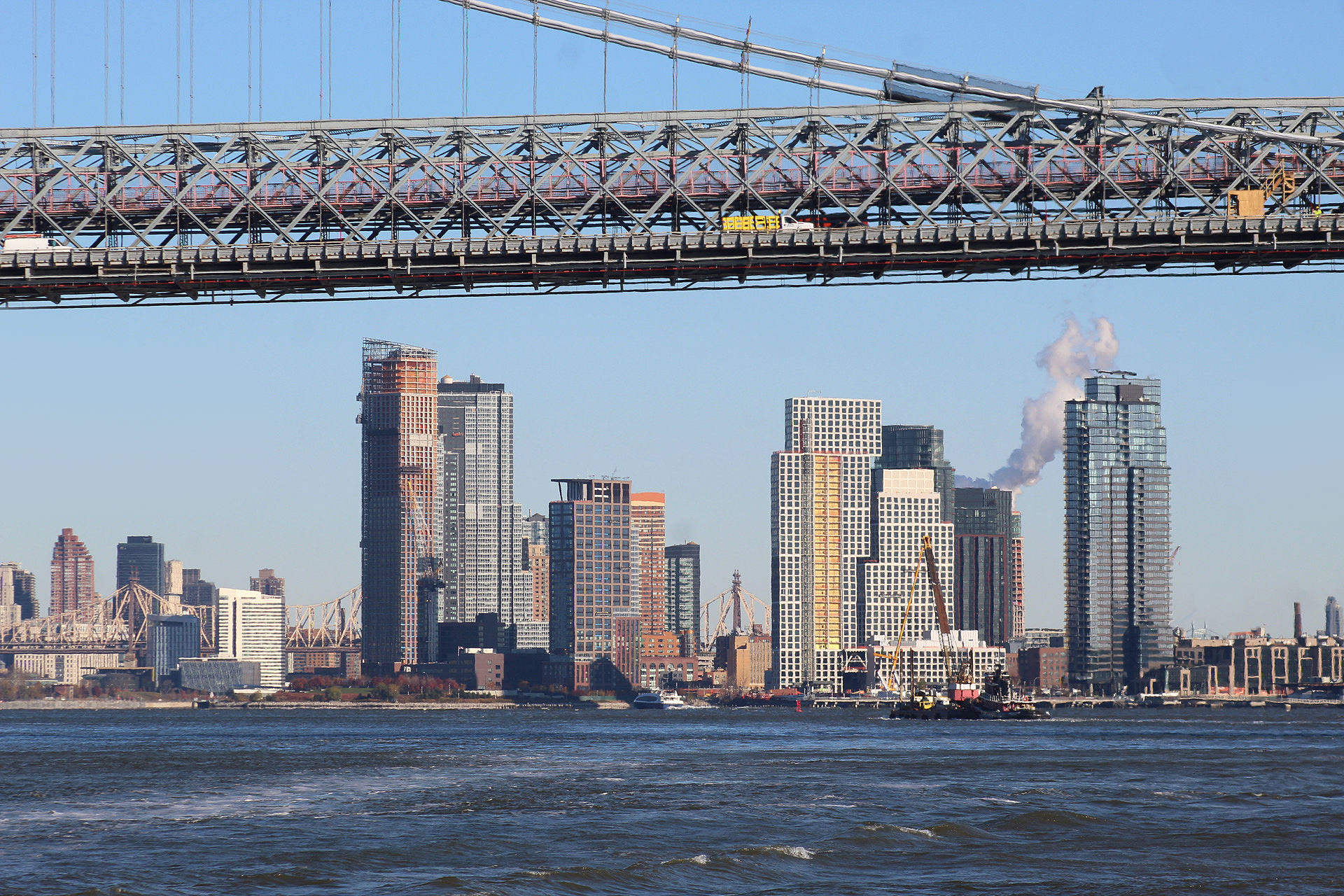 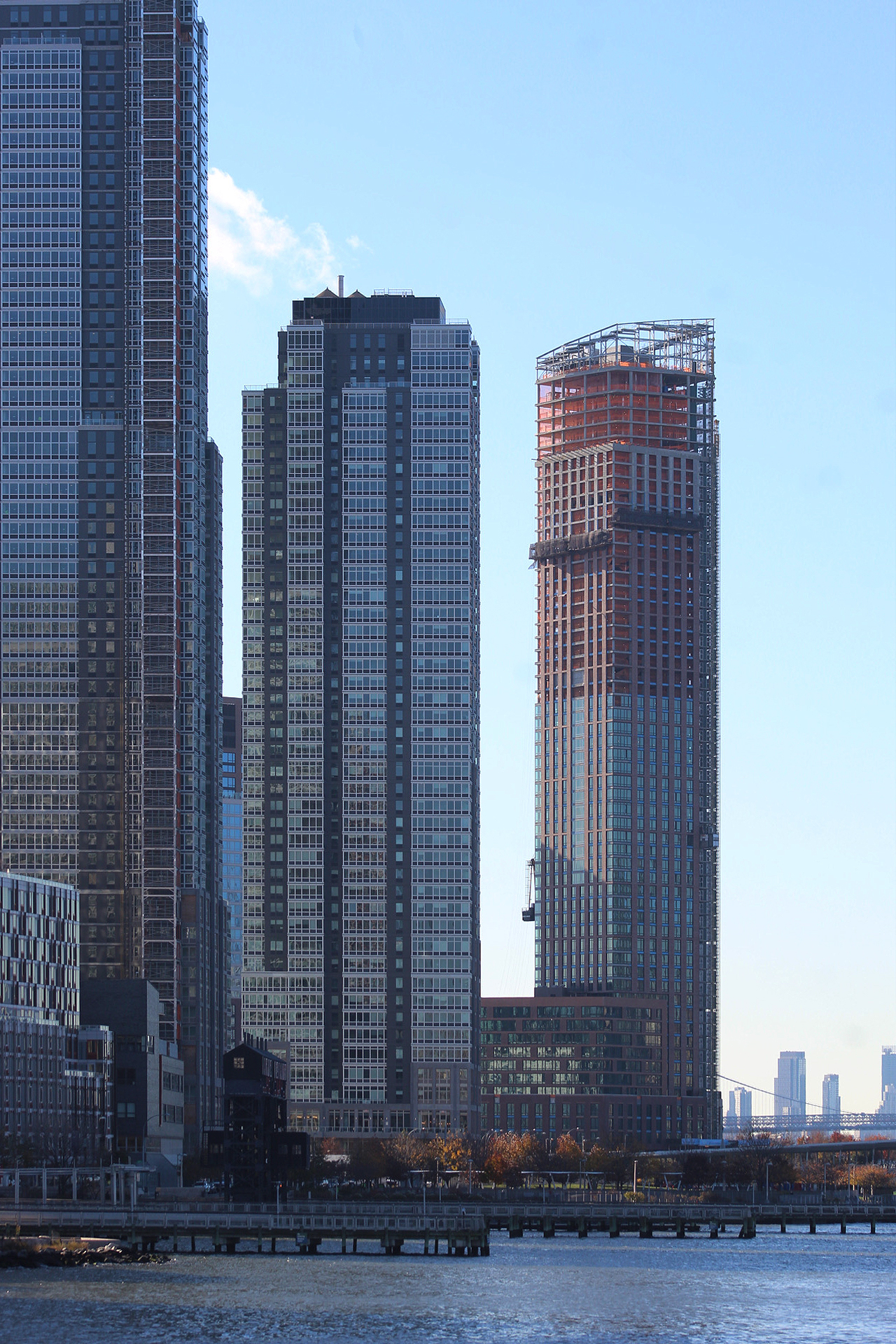 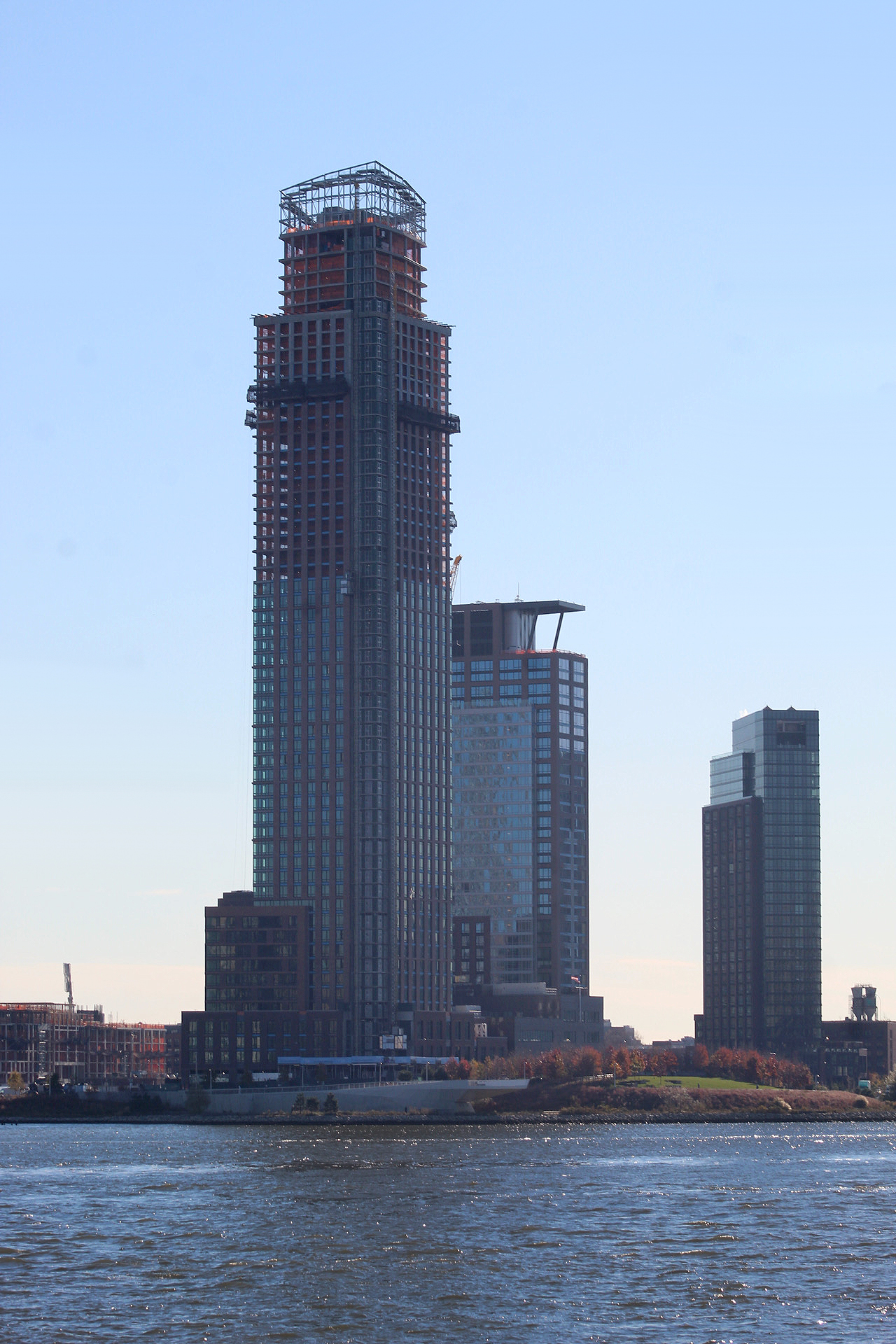 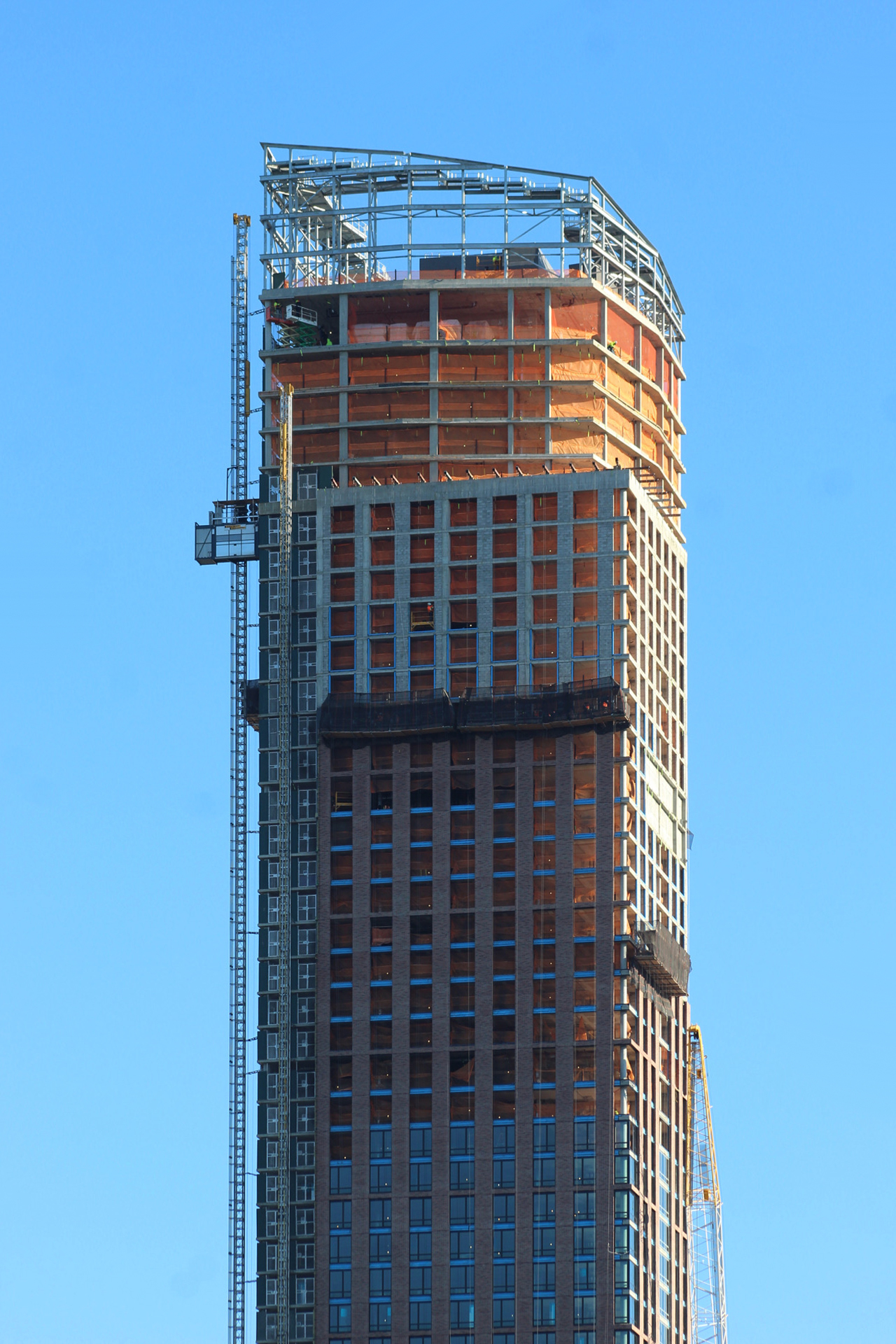 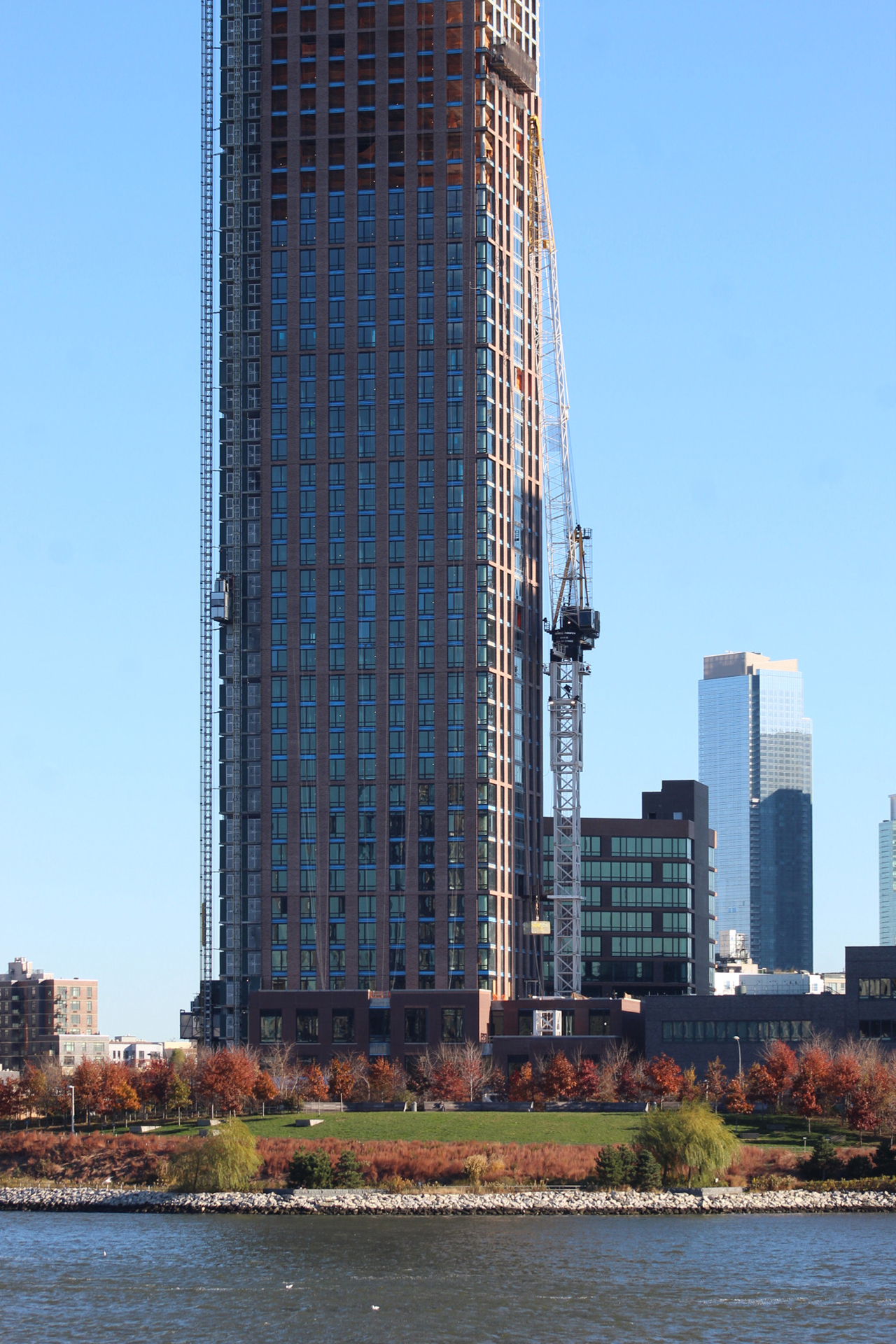 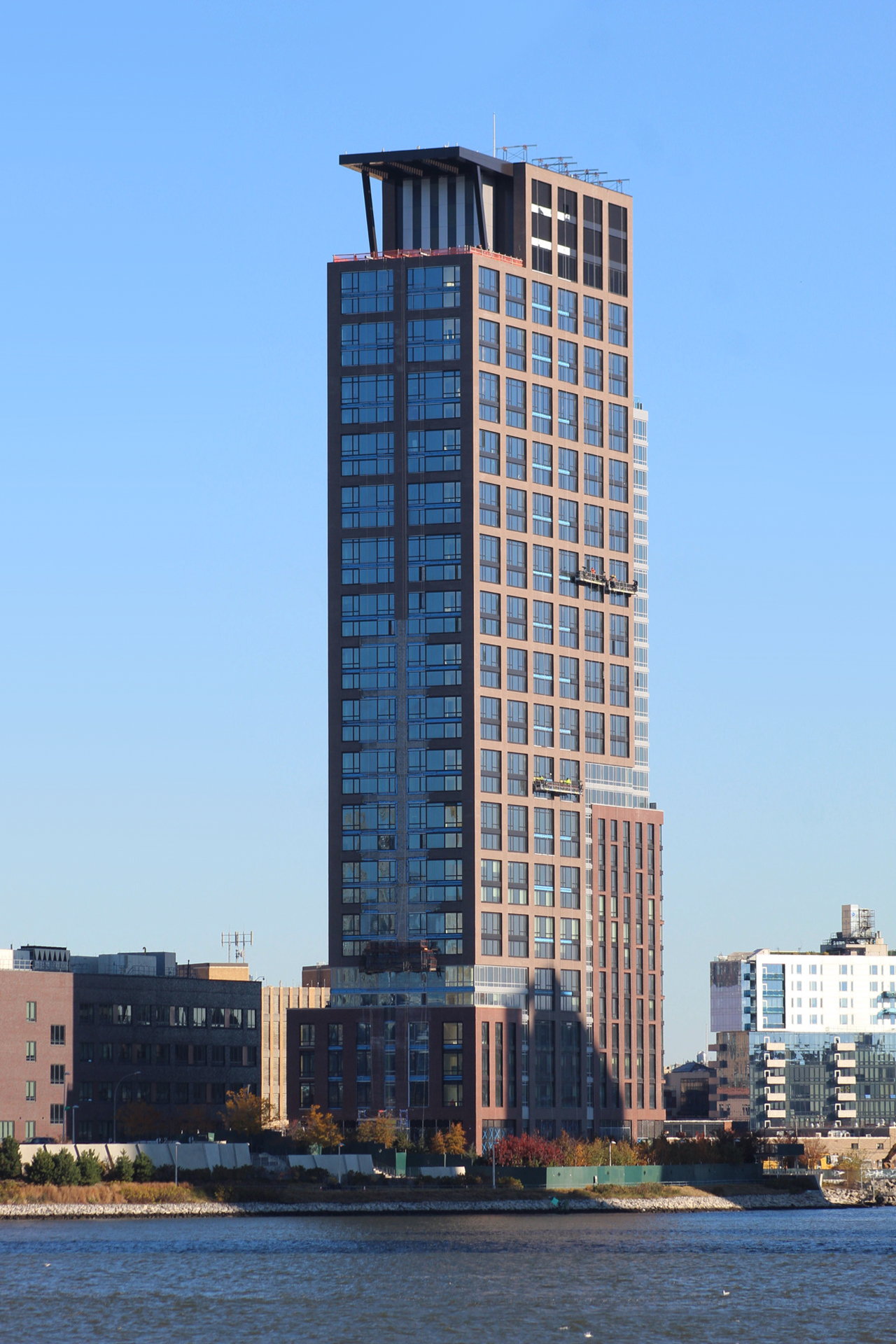 Parcel F will yield 847 rent-stabilized units with income limits ranging from $15,806 to $137,940 for an individual. Income limits for a four-person household range from $23,692 to $196,845. Amenities include an outdoor rooftop terrace, multiple resident lounges, an indoor-outdoor fitness club, a children’s playroom, a publicly accessible urban rooftop farm, a community boathouse, and co-working lounges with breakout meeting rooms, private phone rooms, and multi-person desks. Additional components include a publicly accessible underground parking garage, ground-floor retail in the north tower, and a 3,000-square-foot community facility in the south tower. Parcel G will also house a permanent 3,000-square-foot community facility for Flux Factory, a non-profit organization that provides affordable exhibition and collaborative spaces for new and emerging artists.

The development will offer 98 dedicated homes for low-income senior residents housed within an 11-story wing complete with its own personal lobby space, a lounge and laundry room on each floor, a library, and a community room with a shared pantry. RiseBoro will lead special programming for the senior community. These units are to be available to individuals with income levels ranging from $15,806 to $85,920.

Parcel F is slated for completion next year, while Parcel G is expected to debut before the end of 2021.