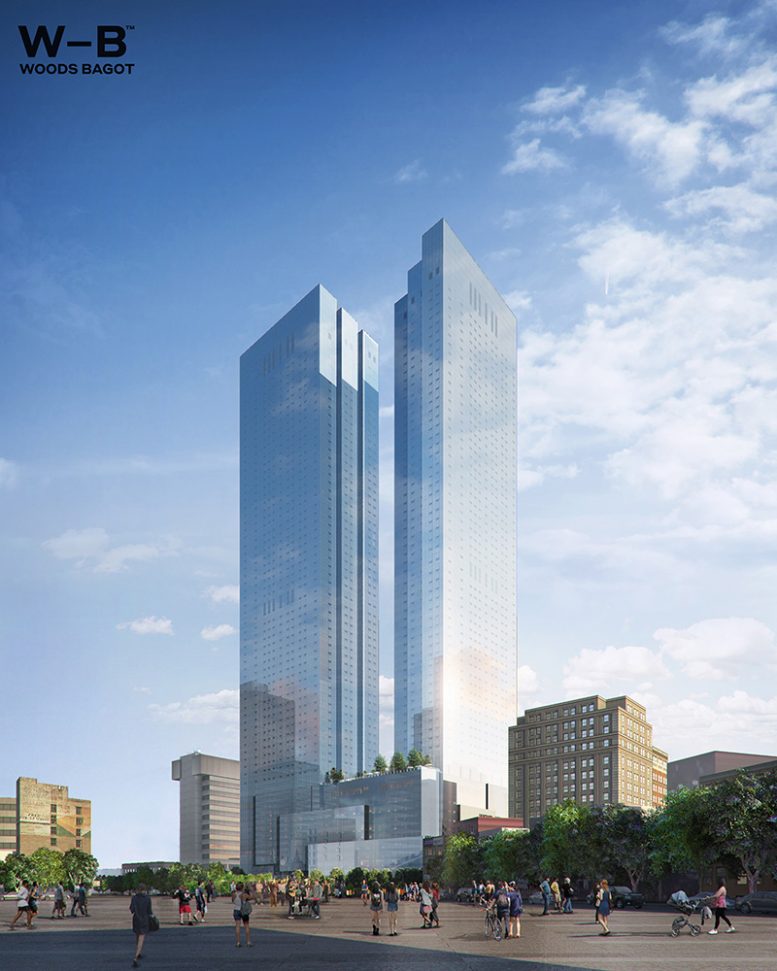 Designed by Woods Bagot, both towers will top out at 64 stories with the residential component occupying the majority of the floor space. This includes 1,723 rental apartments ranging from studios up to three-bedroom units, and 45,000 square feet of amenities.

The amenity offering includes an Olympic-size indoor pool, a cold plunge pool and whirlpool spa, sauna and steam rooms, a bowling alley, a golf simulator, multiple lounges, co-working space, a chef’s kitchen, and a kid’s club. Health and wellness amenities will include a fitness center, a separate yoga and training room, a spin cycle suite, a full-size indoor basketball court, a rock-climbing wall, and a squash court.

Tenants will also have access to two landscaped rooftop terraces and an outdoor lounge pool with a hot tub. 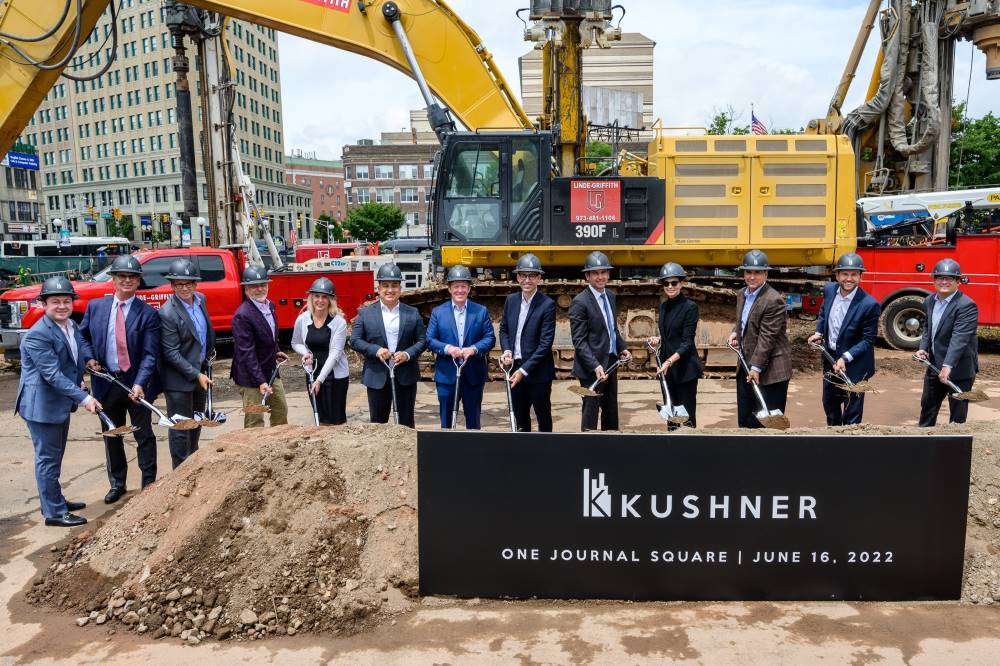 Jersey City Mayor Steven Fulop, members of the management team at Kushner and others drove ceremonial shovels into the ground to mark the start of construction at One Journal Square, a nearly $1 billion mixed-use development that will create more than 2 million square feet of residential, retail, amenities, parking, and open space in the heart of the historic and well-connected Journal Square neighborhood. 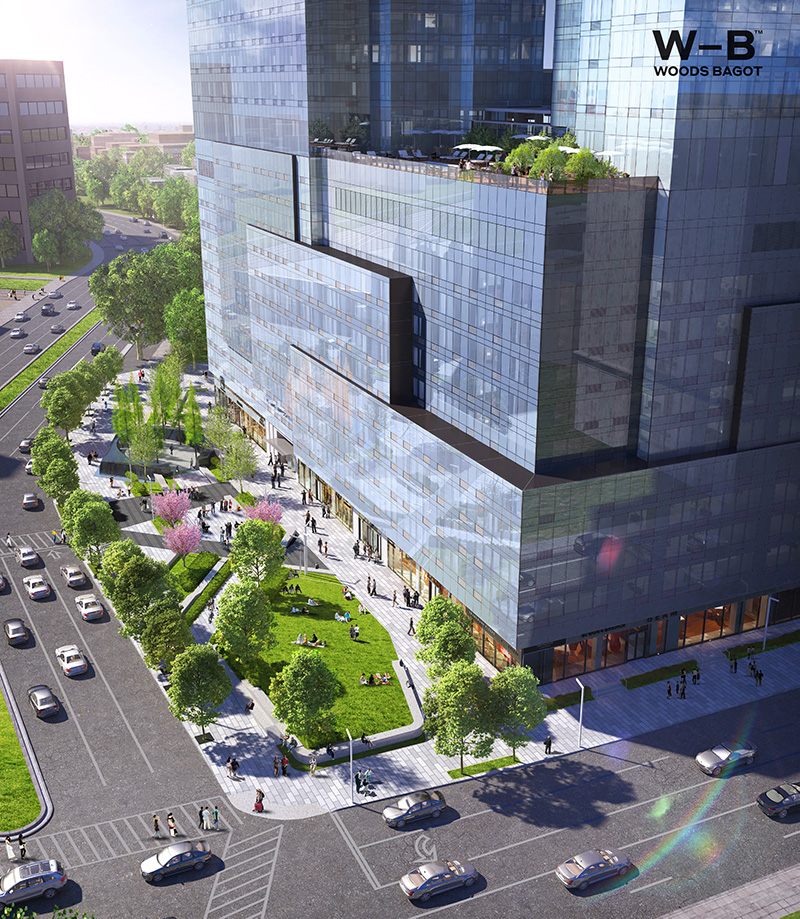 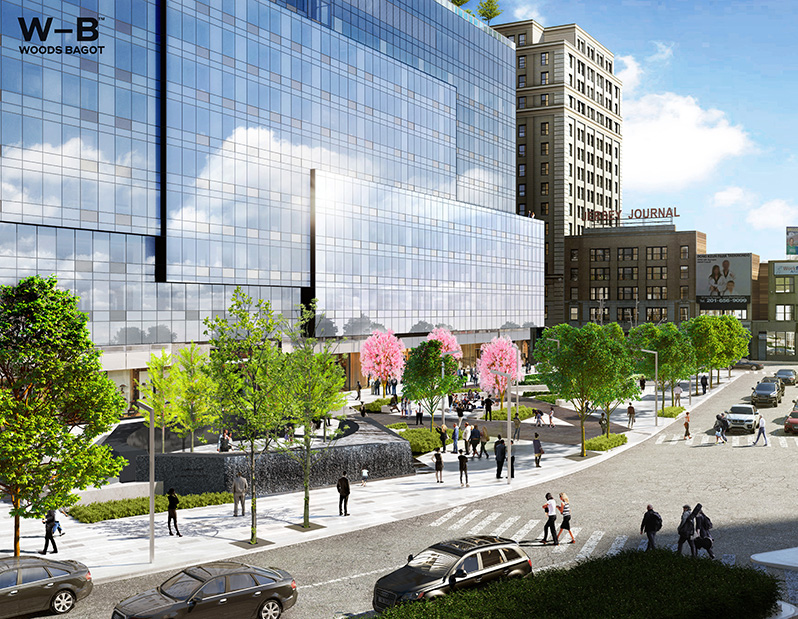 Rendering of public plaza at One Journal Square – Woods Bagot

“This project is bar none the most significant project we have in Jersey City and probably the most significant project in New Jersey,” said Jersey City mayor Steven J. Fulop. “If you can imagine this being completed in the next 36 months, and all the other things in Journal Square moving forward simultaneously, you can get a little bit of a glimpse of what it will be in three short years, and the most important project to make that a reality is One Journal Square.”

The ground floor will support 40,000 square feet of retail space. According to an announcement from the developer, a “AAA tenant” for the retail has been secured, but not yet announced by the project team.

One Journal Square is expected to be completed in 2026. Total project costs are estimated at approximately $1 billion.

“Today’s groundbreaking for One Journal Square has been several years in the making for us, and we are thrilled to begin the physical build-out of what we believe will be the crown jewel of this resurgent neighborhood and an important asset for all of Jersey City,” said CEO of Kushner Laurent Morali. “Our steadfast commitment to moving this pivotal project forward was founded in our strong belief in Journal Square, both in its present and in its future, and we look forward to bringing our vision to life.” 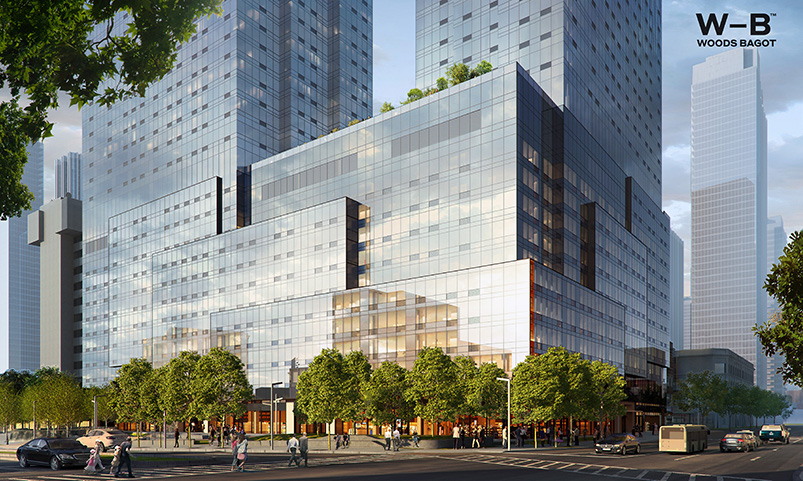