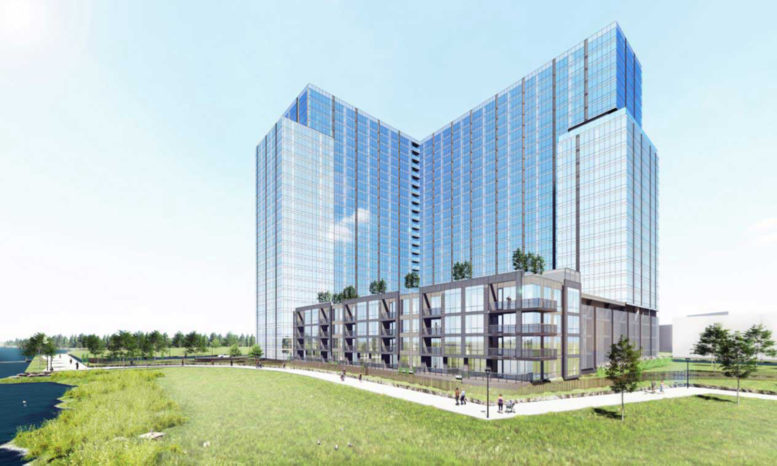 Construction on a new 25-story residence, called “Waterside at Xchange,” has reached its top floors over Secaucus, New Jersey and is also known as Building G. This is the tallest component in a number of completed and neighboring residential developments that make up the Xchange at Secaucus Junction complex. The building is being designed by Perkins Eastman and developed by Fraternity Meadows, LLC on what was once an empty plot of land nestled between the Hackensack River and Brianna Lane. Nearby is the Secaucus Junction train station to the south of the New Jersey Turnpike. A total of 403 residential units and four floors of parking are expected to be created and housed within Waterside at Xchange. 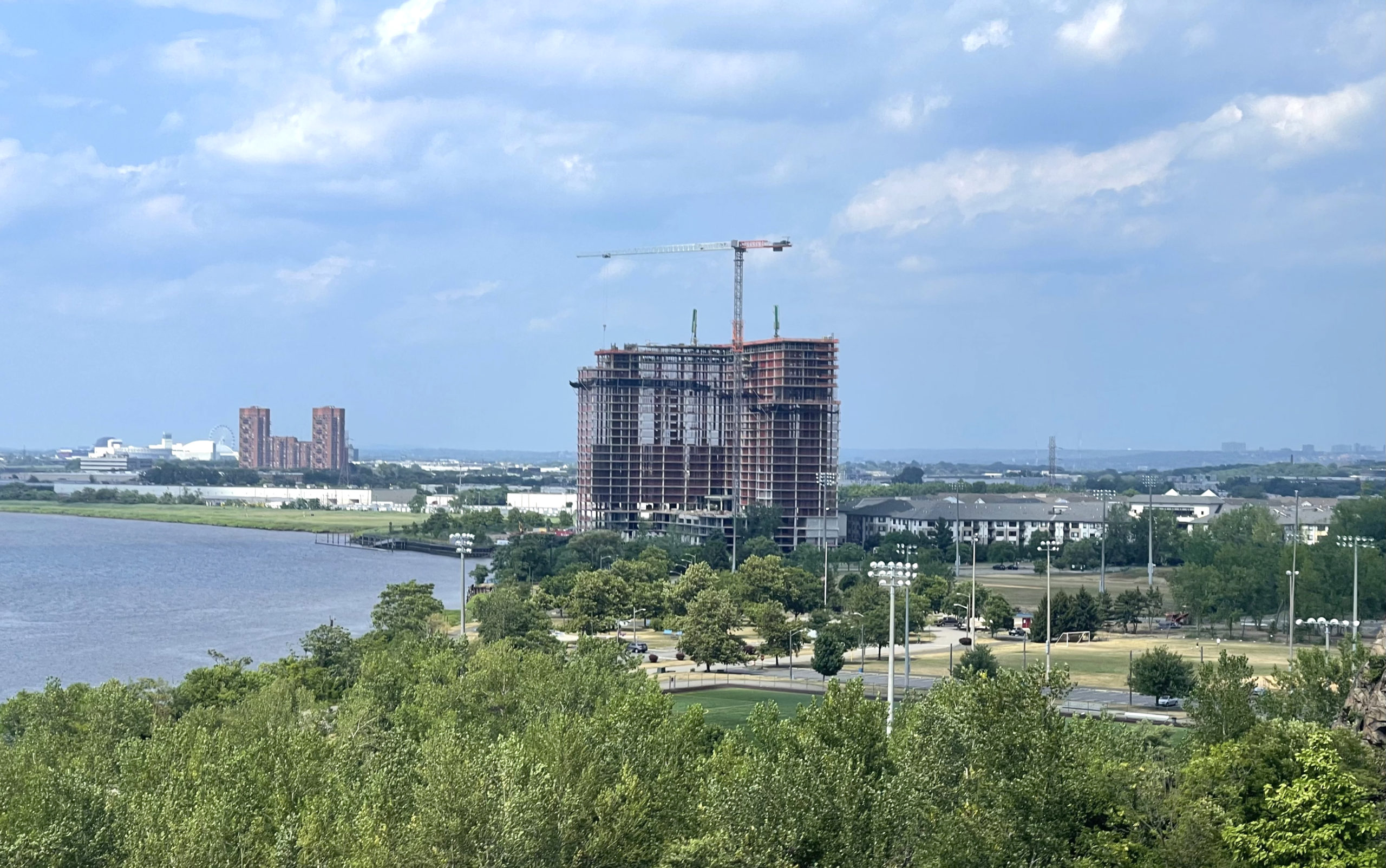 The reinforced concrete superstructure has an L-shaped massing that sits atop a multi-story podium raised well above the adjacent water line of the Hackensack River and dominates the surrounding landscape. Its height and lack of buildings built to a similar scale and magnitude makes it clearly visible from the New Jersey Turnpike. Crews have steadily assembled the floors over the course of the past year, while work on the facade has yet to begin installation. We can see the lower half of Xchange with its inner walls mostly in place, while one can still see between the floor slabs on the upper portion of the tower for now. Meanwhile concrete rigs were seen finishing up the remaining work on the roof. 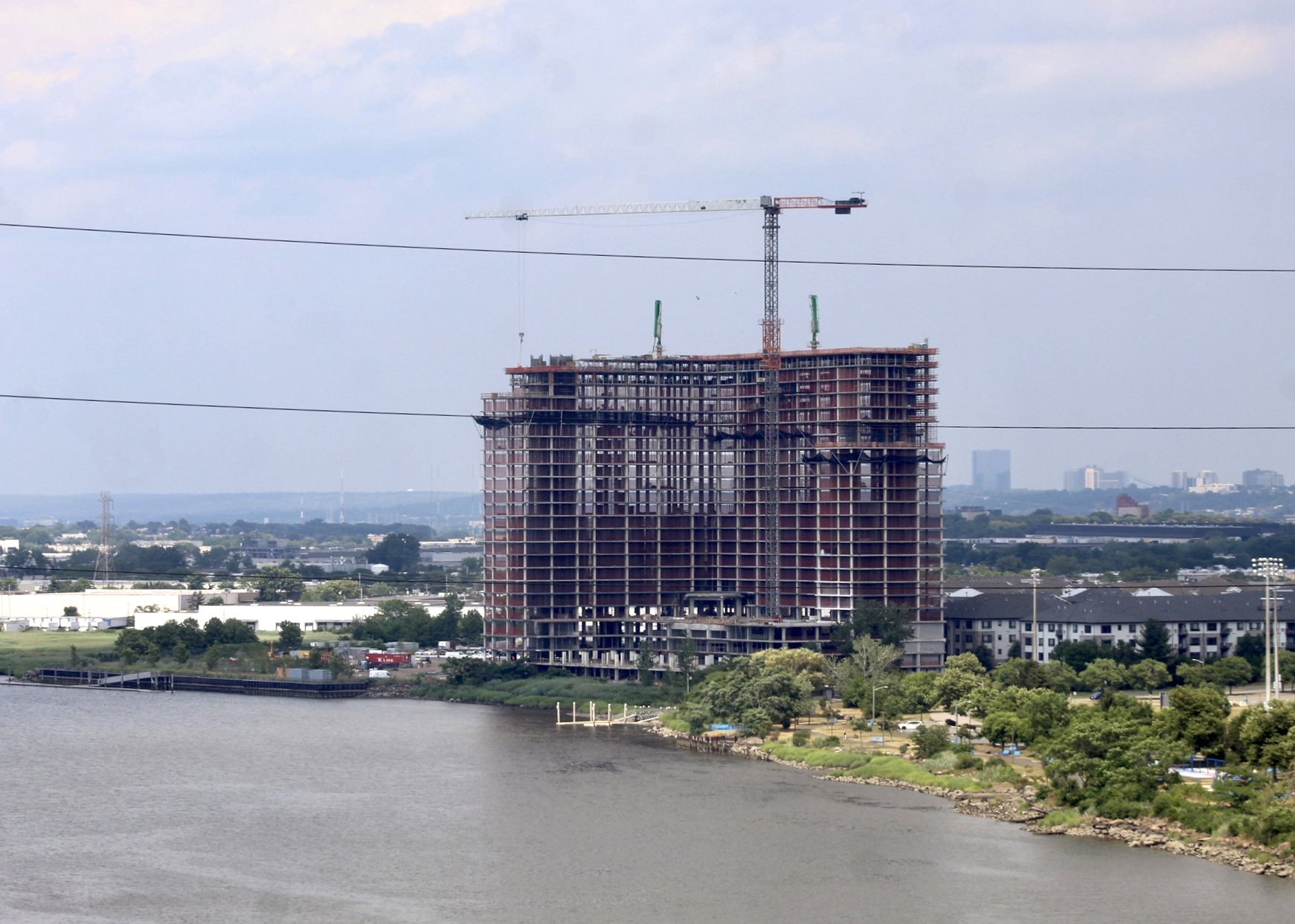 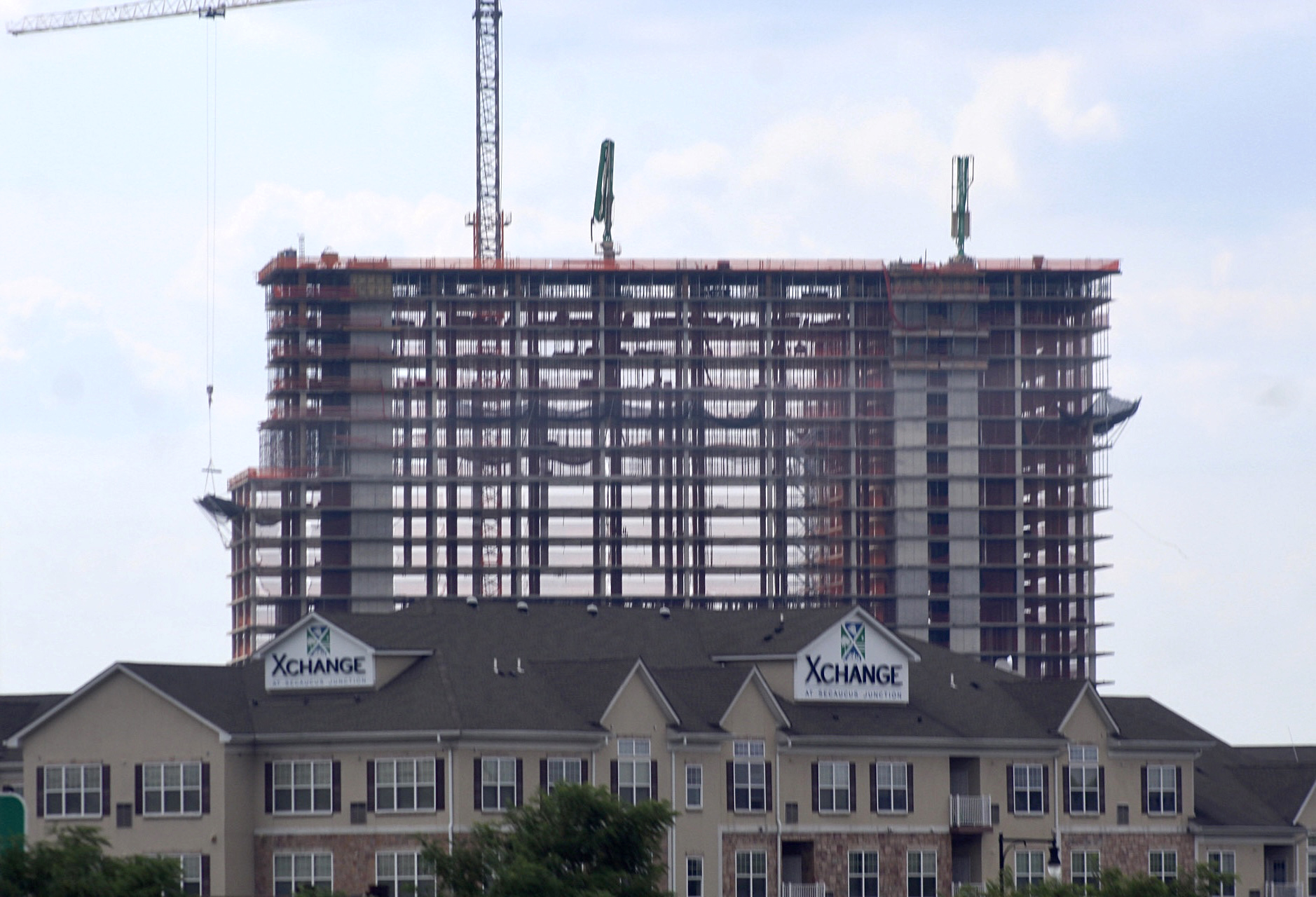 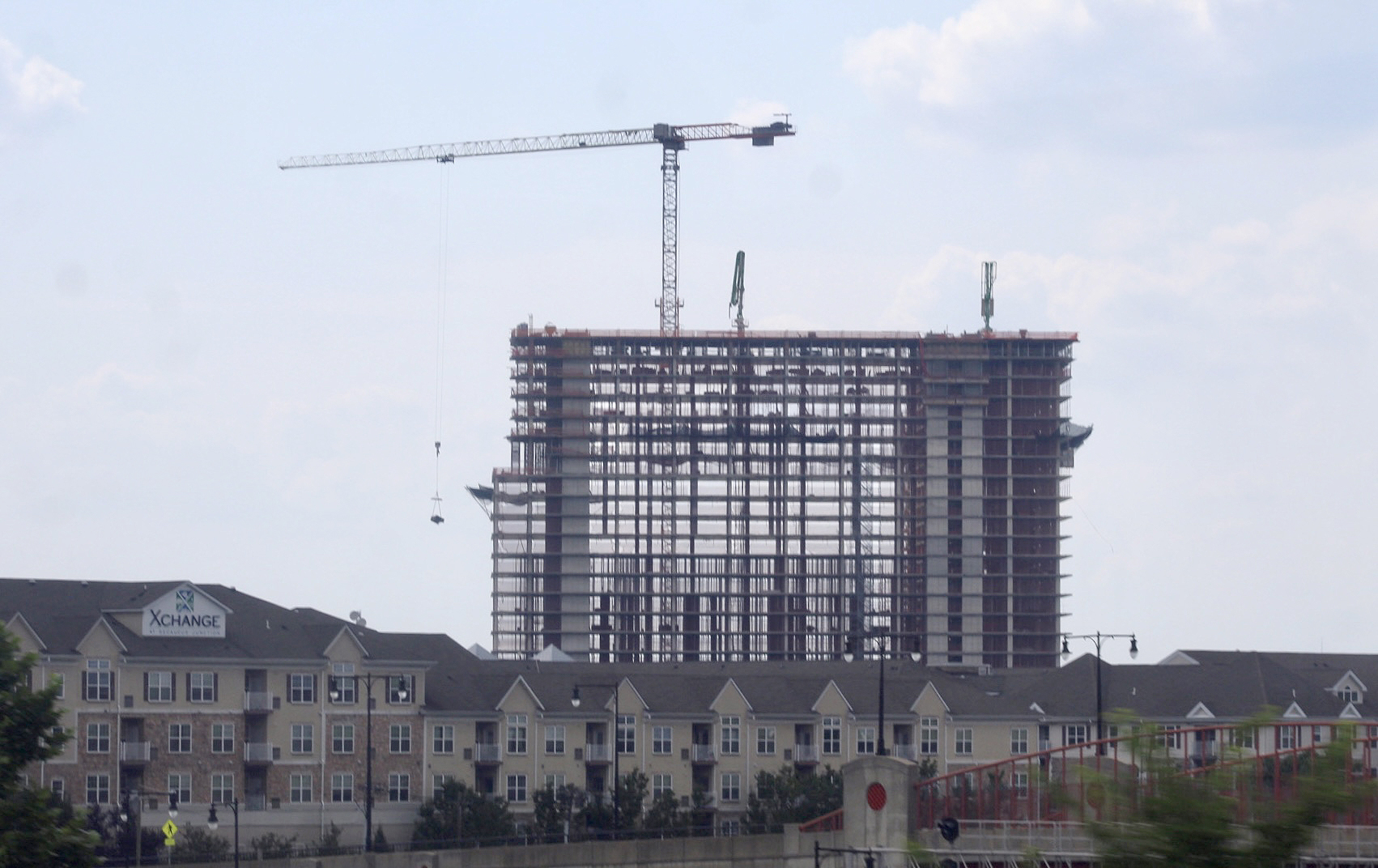 The rendering below is seen on the website for Xchange at Secausus Junction and is oriented looking north. A darker cladding encloses the podium, while the main tower uses a more uniform glass surface and culminates with a flat roof parapet after reaching a couple shallow setbacks on each end. Down the middle is one vertical stack of balconies for a select number of homes. 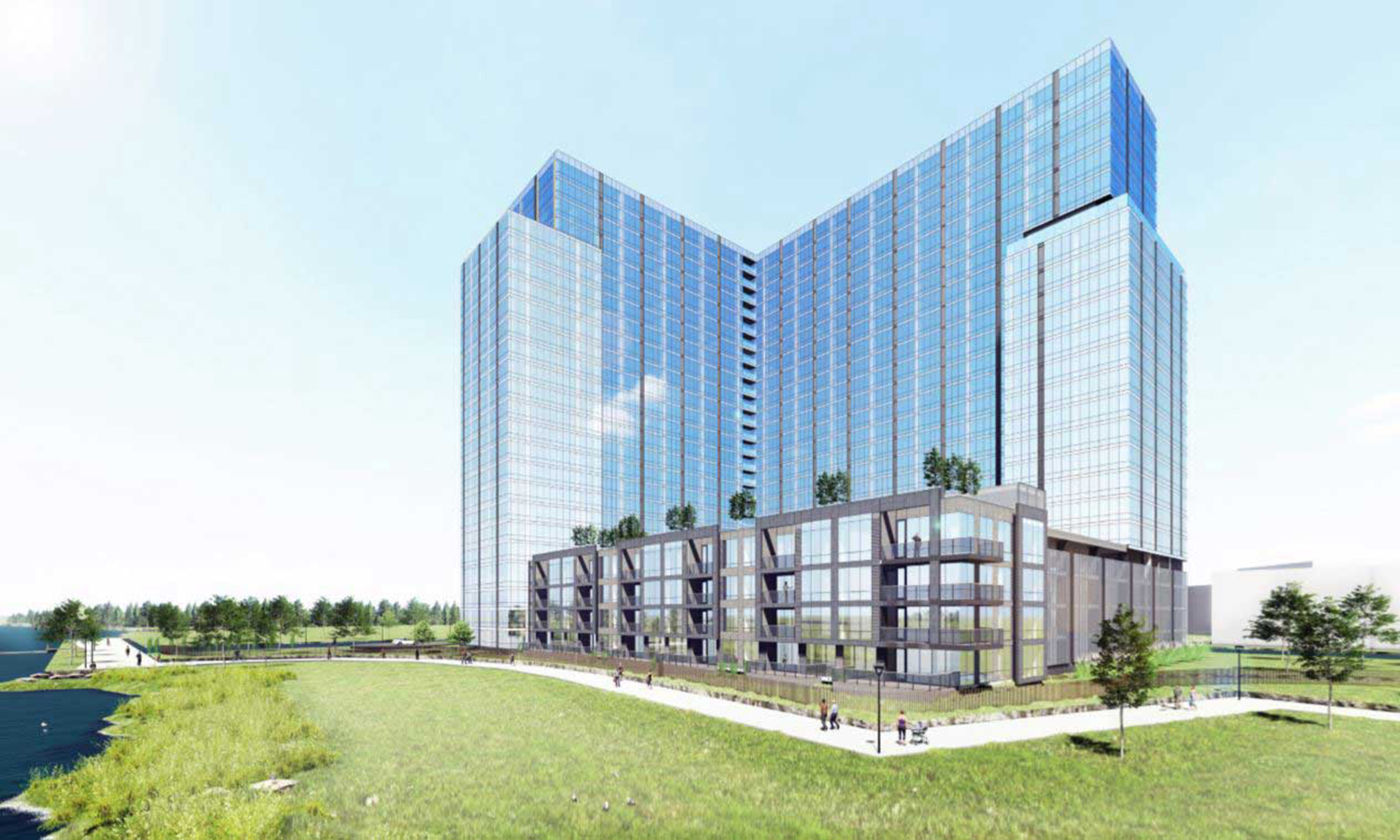 YIMBY expects to see the floor-to-ceiling glass curtain wall to start going up later this year and interiors soon following suit. Those with a unit against the main eastern facade will get a perfectly framed view of the entire Manhattan skyline from the Financial District to Billionaire’s Row, as well as the Jersey City further south and Fort Lee to the north. Future residents on the opposite western side of Xchange will have panoramic sunsets all year round with the American Dream mall visible to the northwest and the skyline of Newark, New Jersey to the southwest.

A completion date has yet to be heard.