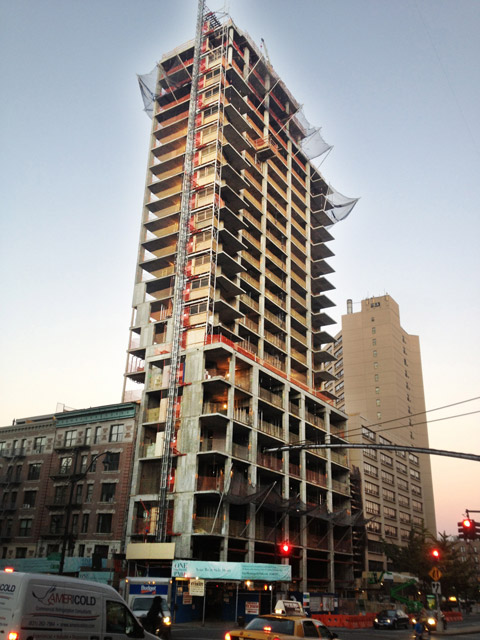 YIMBY reader Michael sent in the above photos of One Morningside Park on 110th Street, which has topped out – though the facade remains missing in action. The 22-story condo building will house 55 units. The building’s website – which also has renderings – suggests that about half of the units have already entered into contract. Designed by GF55 Partners, the complex makes literal use of air rights with a significant cantilever over its northern neighbor. The terrace units should have an excellent view of neighboring Morningside Park, as well as the Cathedral of St. John the Divine.

The construction is part of a larger gentrification of Harlem and is located next to the 110th Street B and C subway lines, providing quick access to Midtown Manhattan. One Morningside’s location has seen rapid improvement in recent years, with several new developments rising in the vicinity; demographically, the building is a manifestation of the Upper West Side’s northward expansion. With the continued push of gentrification, Morningside Park itself may be on the verge of a renaissance – Morningside has long played second-fiddle to the much-larger Central Park, but continued improvements to the neighborhood could be a catalyst for renewal.

While One Morningside Park’s design is far from cutting-edge, it does fit into the neighborhood surroundings aesthetically – and especially physically, given the building’s jigsaw-like cantilever over its pre-war neighbor.