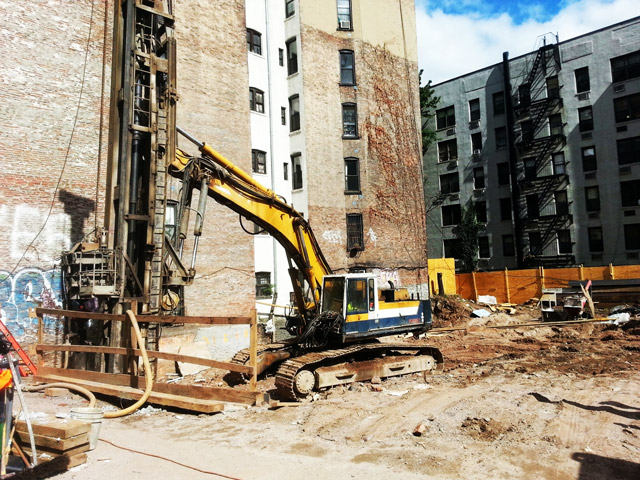 The God’s Love redevelopment has some shiny new renderings, and the new tower that will rise on the adjacent lot has been dubbed ‘One Vandam‘ – and it does not disappoint. Quinlan Development Group and Tavros Development Partners are helming the project, which was designed by BKSK architects, and will rise 14 stories. The first level of the building will be double-height, giving the project minor additional verticality – though neighborhood NIMBYs had fiercely opposed the plans, the final product is still relatively short.

Despite only rising 14 floors, One Vandam will be able to take advantage of spectacular views, given its location – while taller buildings rise to the west, northern and southern perspectives are relatively unobstructed, which will give upper units vistas stretching from One World Trade Center to the Empire State Building. With only 25 units, the building will also be super-exclusive, unsurprisingly catering to the uber-luxury segment of the market.

One Vandam’s aesthetic is decidedly more modern than its surroundings, but contextuality isn’t always a necessity – as this case proves. The building achieves its futuristic look via irregular window placements and extruded metallic rooftop elements, combined with green space throughout. While not nearly as transformative as Bjarke Ingels’ Pyramid, One Vandam is certainly unique, enhancing both itself and the building’s historic neighbors through the extreme contrast in styles – beyond aesthetics, the building does integrate into the adjacent northern street-wall, as well.

With an official address at 180 Sixth Avenue, One Vandam will be a welcome addition to the South Village, as the immediate vicinity has been relatively forlorn. The site is being developed because God’s Love needed more money for the redevelopment of their own building, and the ultimate result will be a win-win for both parties. Excavation is now underway.