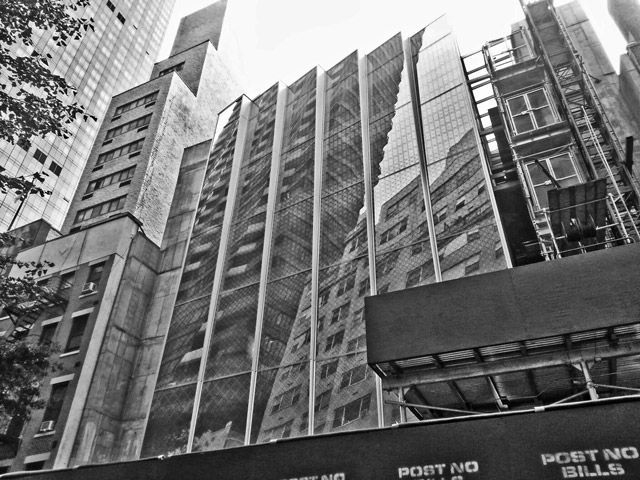 Construction is almost complete at 320 East 48th Street, which will soon be home to Singapore’s diplomatic mission to the United Nations – in this case, the building has been designated as a ‘chancery’. Designed by HOK, the structure is rather small – nevertheless, the glassy facade is a pleasant break from the run-down surroundings, which predominate in the vicinity. Its neighbors are nearly decrepit, and the stark contrast between old and new serves as a reminder that the age of a building should have nothing to do with its landmark status.

The design director of HOK’s New York office, Kenneth Drucker, sat down recently to discuss some of the firm’s projects, and described how the “five twisted glass blades in the main facade of the building represent the five attributes of the Singaporean government.”

What exactly those five attributes are is unclear, and whether or not the facade repels chewing gum is also a mystery, but the building is a better than adequate addition to Midtown East. Completion is imminent, and 320 East 48th Street enjoys great proximity to the United Nations, the reason for its location in the first place. Given Singapore’s boomtown status, perhaps the chancery’s future occupants will look into nearby residences at the equally attractive 50 UN Plaza.