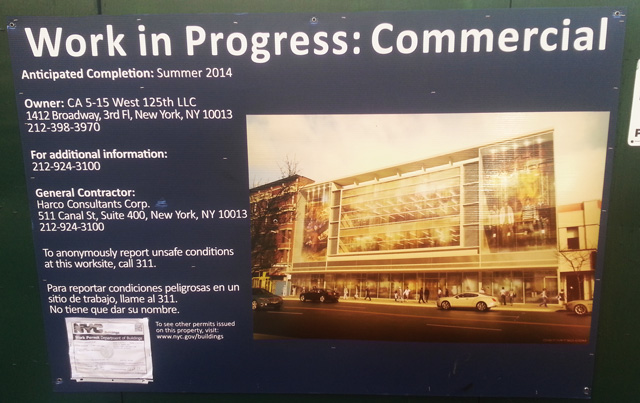 A new low-rise project with a significant retail component has begun construction at 5-15 West 125th Street, with excavation now underway. The development will have 100,000 square feet of retail space, and spans the width of the block; it will stand four stories tall. While the revitalization of 125th Street should be applauded, the recent re-zoning barely alleviated the restraints on the neighborhood, which remain severe; 5-15 West 125th Street will look similar to other big-box and retail-driven developments that have risen along the thoroughfare. While their function is beneficial, the aesthetics are lacking.

Given the transit accessibility of 125th Street, there should be additional allowances for development, to prevent the monotony that is becoming increasingly abundant. 121 East 125th Street is a notable exception to this trend, but overall, allowing denser development would, perhaps, encourage more aesthetically and urban-friendly buildings.