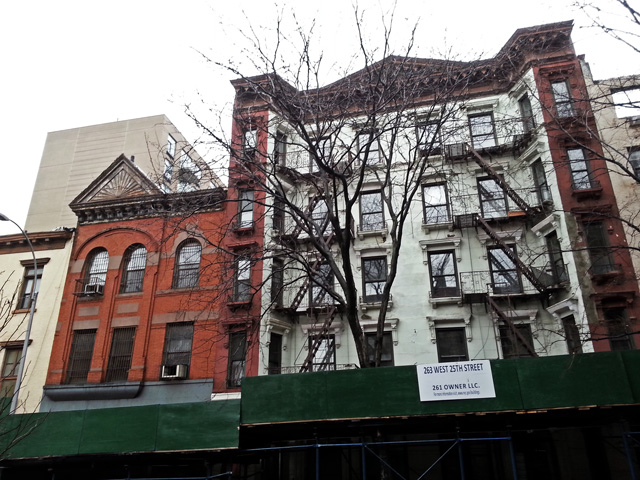 Permits have been approved for the demolition of several structures on West 25th Street, which will make way for a residential development by the Naftali Group. The new building will rise 12 floors, and contain 135,000 square feet of space; the architect of record is Goldstein, Hill, & West.

Fencing and signage have now gone up outside the existing buildings, which means demolition should be around the corner — and the project’s official address looks to be 261 West 25th Street. 261-267 West 25th Street will be cleared for the new structure. While no renderings have been released, 261 West 25th Street will be geared towards the high-end of the market, with only 49 units. Given the development’s exclusivity — and the fact that it will be condo, not rental — the design should be more than satisfactory.

Around the corner — at 260 West 26th Street — another 12-story building that recently went up, dubbed ‘The Chelsea Park,’ offers a glimpse of the massing that is likely at Naftali’s project. Though the Chelsea Park is a rental, it should have a similar bulk to the future 261 West 25th Street, and the neighborhood should avoid an aesthetic catastrophe.

Per The Commercial Observer, Naftali bought the parcels for $20.1 million back in 2012, adding to their nearly block-long assemblage; the developer also owns 245 through 259 West 25th Street. It does seem that details for 261 West 25th Street have changed since the Observer’s article, with an increase in the allowable square footage, and a decrease in the number of planned units; the DOB permits indicate an average unit size of nearly 2,800 square feet.

No completion date for the project has been announced, but an approximate estimate of 2017 would seem likely.

Google’s 2-Acre Rooftop Park Opens to the Public at Pier 57 in Chelsea, Manhattan