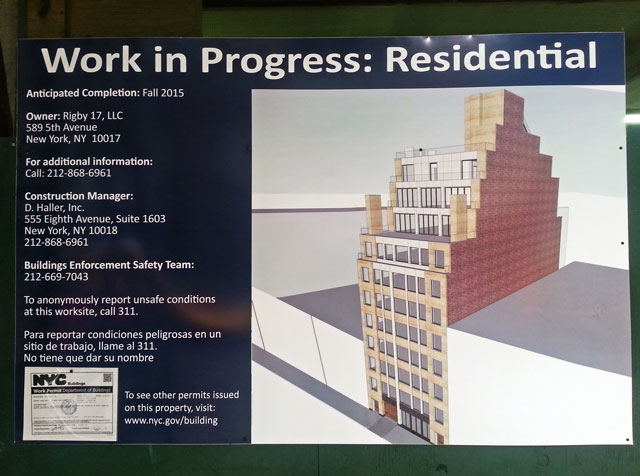 On-site renderings are up for 17 East 12th Street in Greenwich Village, which is yet another conversion in the works. The building was formerly occupied by a parking garage, but sold to Rigby Asset Management last August for $50.2 million. Given that netting, fencing, and signage are up, re-development appears to be well underway; Bromley Caldari is heading the design of the project. Permits for the site were partially approved last month, and indicate that the structure will only see slight alterations to its envelope, with the square footage remaining unchanged. The building will see three levels added to its roof, bringing its height to 11 stories and 137 feet.

In total, the development will comprise 48,583 square feet, with 4,541 square feet on the ground level to be dedicated to commercial use. With only nine condominiums in the residential portion, that translates into an average unit size of nearly 4,500 square feet, which is practically unheard-of in Manhattan.

The only real comparison is located to the rear of the site, at 12 East 13th Street, which is also a garage-to-residences conversion — though that overhaul appears to be significantly more substantial than what’s occurring at 17 East 12th Street. The block has another super-luxe addition at 61 Fifth Avenue — designed by Alta Indelman — and momentum in the neighborhood is seemingly shifting towards ultra-high-end real estate. While many de-cry ‘gentrification’ and its supposed ills, the conversions of 17 East 12th Street and 12 East 13th Street will be beneficial to The Village; even though the buildings will have few units, they used to be parking garages, which contributed nothing to the neighborhood and were aesthetically unappealing.