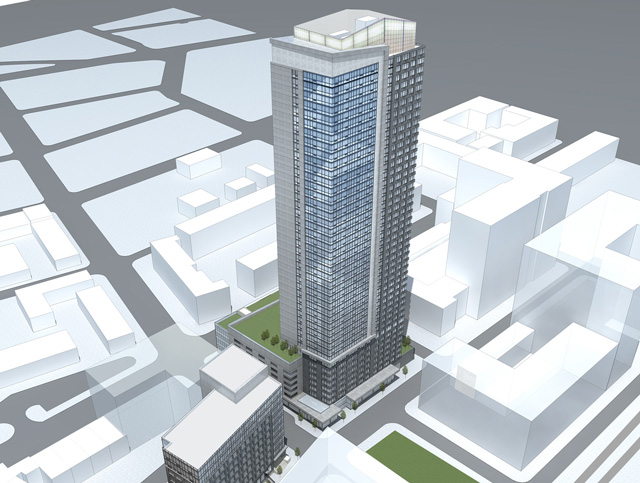 The first renderings are up for yet another skyscraper that will soon begin construction on the Jersey City waterfront, at 235 Grand Street. The tower will be part of Liberty Harbor North, and Ironstate is the developer; the architect is HLW, and their website has additional images of the project. Several complications must be addressed before work can start on the project, as the site is currently occupied by an old coal bunker that houses a non-profit. The organization is moving to another new Ironstate building at 18 Park — designed by HWKN — which is opening this June. Once the re-location is complete, demolition can begin on the old building, and construction on 235 Grand Street is expected to start later this year. Ironstate’s website indicates that the tower will stand 45 stories tall, with 670 units in total; an additional mid-rise component will be located next-door. While Liberty Harbor North has a long ways to go before full build-out, the progress at 235 Grand Street will further enhance the Jersey City waterfront, which is booming with new development. 235 Grand Street’s base and the neighboring mid-rise; image via HLW

In terms of design, the architecture of 235 Grand Street is fairly standard for Jersey City, but its ground-level presence will revitalize a former dead zone. The plan incorporates an extension of Grove Street, and will also add green space to the neighborhood.  The tower itself is tall, glassy, and typical of large-scale luxury developments across the Hudson; its mid-rise neighbor will also add density and bulk, further extending the pedestrian-friendly realm of Liberty Harbor North.