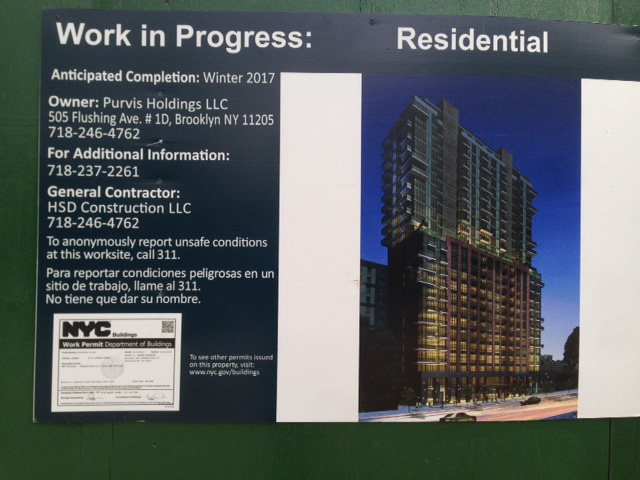 A series of new permits have been filed for 44-41 Purves Street in Long Island City, which Curbed first reported on back in September of 2012; plans have evidently seen major alterations, and the latest filings with the DOB indicate an increase in the number of planned units. While The Criterion Group was previously listed as the developer, the lot changed hands, and Simon Dushinksy’s Rabsky Group is now heading the site’s construction.

The Court Square Blog posted on-site renderings last month, and the latest permits seem to corroborate the depicted design, though the details behind the project have seen changes. What was initially expected to be a development with multiple components has been consolidated, and 44-41 Purves Street will now stand 25 stories tall, with its 207,595 square feet split between 284 units; the building will be entirely residential. Zoning diagrams reveal the latest changes, which are corroborated by the latest work approval application; the documents were filed with the DOB at the end of March. Given the similarities between the drawings within the zoning diagrams and the on-site renderings, it would seem that the design covered by The Court Square Blog simply lacked the relevant permits at the time it was put up; luckily, the DOB filings now seem to have caught up with what’s apparent on the ground. While the general Court Square vicinity is in the midst of a development boom, Purves Street in particular is seeing a significant amount of activity, and according to The Real Deal, another project is planned across the street. 44-41 Purves under construction; image from The Court Square Blog