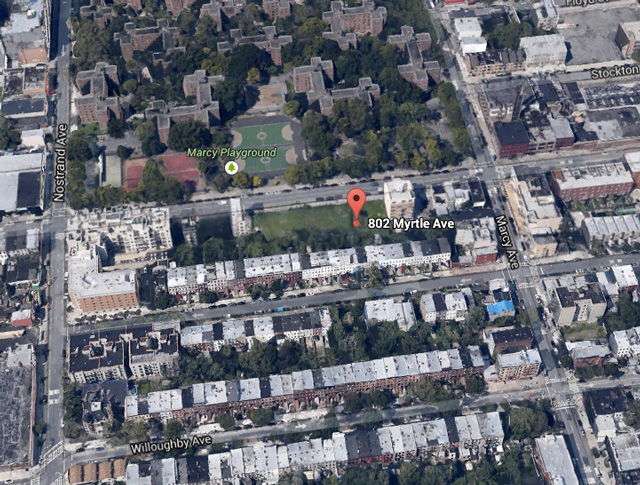 The first permits are up for 802 Myrtle Avenue in Brooklyn’s Bedford-Stuyvesant neighborhood, which ‘Bright Villas LLC’ is developing. While the actual developer is unknown, the DOB filings come one day after permits were issued for 75 Ralph Avenue — also in Bed-Stuy,  — and both projects feature Charles Mallea as the architect of record, which may or may not be a simple coincidence. The filings indicate that 802 Myrtle Avenue will span 31,201 square feet, with a 76 square foot commercial component to be located in the project’s cellar, giving it the smallest claim to ‘mixed-use’ possible. The remainder of the building will have 46 residences, spanning eight stories; the structure will stand 94 feet in total, and ceiling heights will be surprisingly generous compared to typical new developments in the neighborhood.

While much of Bedford-Stuyvesant is dominated by pre-war architecture, the vicinity of 802 Myrtle Avenue was decimated during the time of Robert Moses, and the Marcy Houses are located directly across the street. Positive changes are gradually occurring across the entire neighborhood, and developments like 802 Myrtle will go a long ways towards bettering the area’s reputation, which has typically revolved around the negative press surrounding its public housing.

Regardless of the potential design for 802 Myrtle, its effect will be a major positive for a block that has been on the outs until recently. Politicians may lack the motivation to fix systemic issues that plague the neighborhood, but if Bed-Stuy is to regain a sense of its pre-Moses vitality, piecemeal development is definitely a good start.

No completion date for 802 Myrtle has been announced.